What are people in our household doing for fun this holiday season? Well, since you asked... 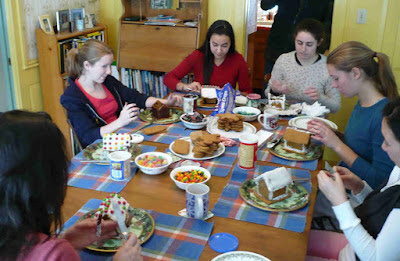 Thursday the 27th found more elves working on a yellow ducky in our front yard. Left to right: Tiffany Cochran, Regan Duffy, Brian. Laura also helped (she's not in the picture because she took it). The yellow coloring is from food coloring. The black eyes are two pieces from a Go game that Brian got for Christmas (from Silk Street in Beijing). 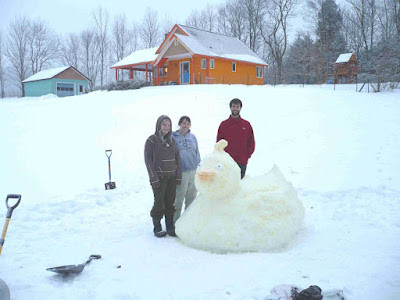 Note the new color of the house next door. Our long-time neighbor, Shirley Winslow, died last February. Her granddaughter Priscilla Winslow and husband Phillip bought the house. They painted it just before Halloween.
Posted by George Putnam at Saturday, December 29, 2007 No comments:

Marion, we have a white Christmas this year!

Here's our back yard at about 8:05 AM this morning: 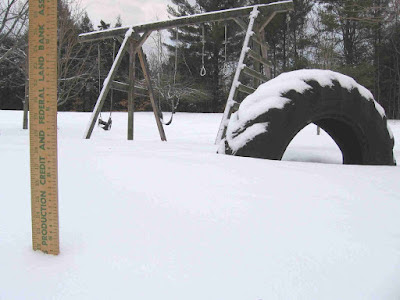 Merry Christmas to everyone!
Posted by George Putnam at Tuesday, December 25, 2007 No comments:

Advances in mathematics sometimes lead to advances in science and technology. (Because significant parts of our world can be described mathematically--see previous post "What is reality?")

There was an interesting advance in mathematics in 2007. I admit that I don't understand the math here. It's way over my head. I understand just enough to see that this might be significant.

There is a branch of mathematics called Lie Groups which deals with symmetry. Symmetry is an important concept in physics. "It is only slightly overstating the case to say that physics is the study of symmetry." (source) 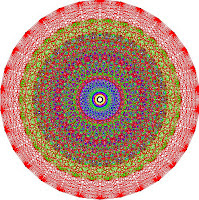 One of the most complex Lie Groups is called E8. In 2007 a team of mathematicians succeeded in mapping E8. See this web site, which provides a good explanation of the achievement. (Brian, note that this project was at the cutting edge of both mathematics and computer science.)

It did not take long before a physicist connected the mapping of E8 to basic theories of the universe. See this interesting article. (Paper here.)

UPDATE 12/05/09: The physicist mentioned in the previous paragraph is Garrett Lisi. To see Garrett Lisi talk about his "exceptionally simple theory of everything" based on E8, see his talk on TED. Highly recommended.
Posted by George Putnam at Monday, December 24, 2007 No comments:

I am intrigued by the question: What is reality? This is an old question, of course, going back at least to the Allegory of the Cave in Plato's Republic.

There isn't any a priori reason to expect mathematics to describe any portion of reality. And yet it does. It is a beautiful and wonderful feature of our world. Einstein said: "Equations are more important to me [than politics], because politics is for the present, but an equation is something for eternity."

There are some who take this idea further, and postulate that our entire world is a computer simulation. Click here for links to one recent discussion of this idea. Jaron Lanier comments here.

Whenever I think about reality, I remember a science fiction book, now out of print, that I read as a teenager: Simulacron-3, by Daniel Galouye. This book was published in 1964, before the age of digital computers, and so the computers in this book are analog instead of digital, but the concept is the same.

If part or all of reality is mathematical or computational, does that take the fun out of it? Does it make our world deterministic and predictable? Not at all! Only in recent decades have we begun to understand this. The mathematics of nonlinear dynamical systems, popularly called chaos theory, shows that unpredictable random behavior can result from extremely simple mathematical systems. An excellent book on this topic is "Chaos," by James Gleick.

This post provides a brief introduction and some background. In the next post, I will comment on something new that recently caught my eye.
Posted by George Putnam at Monday, December 24, 2007 2 comments:

What are kids doing at college these days??!

Maybe the more significant question is what is their mother doing at home these days?!! (I submit this as evidence in support of my comment to the previous post.)
Posted by George Putnam at Sunday, December 09, 2007 No comments:

I could not sleep last night and so I uncharacteristically turned on the TV. I found myself watching an episode of NUMB3RS.

Much to my surprise, there were numerous references to Richard Feynman. One of the suspects had been a student of Feynman's. There was discussion of whether Feynman would or would not have agreed with certain philosophical positions. Mysterious references to "RF59" were explained at the end of the show as shorthand for a famous paper that Feynman wrote in 1959.

So, has Hollywood developed an appreciation of Richard Feynman? Not likely. Although I had never watched NUMB3RS before, I had read about it on the Wolfram Blog. The four employees of Wolfram Research who provide the math consulting for NUMB3RS are undoubtedly familiar with Richard Feynman, especially since their boss, Stephen Wolfram, was a student of Feynman's.

This post on the Wolfram Blog provides more background about the math consulting that Wolfram Research provides for NUMB3RS. It is a fascinating read, and contains several links to even more interesting information.

You can read "RF59" here. It was actually a lecture that Feynman gave at a meeting of the American Physical Society at Caltech. The subject of "RF59" is miniaturization, down to the level of direct manipulation of individual atoms. We now call this field nanotechnology, and Feynman is considered by some to be the father of nanotechnology.

Feynman subsequently gave his "RF59" talk to other audiences, including high school physics students. It is entirely readable by general audiences. I have just now reread it and it is still fresh and interesting, even though it is almost 50 years old. Brian, you will of course not be surprised that Feynman discusses computer technology in this talk. But Emily, you may be surprised at what Feynman has to say about biology in "RF59."