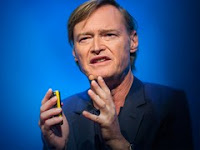 This TED talk by Yves Morieux is excellent:

His theme is that there are too many rules and not enough cooperation. I like his illustration of effective cooperation, a relay race, even if the French women beat the U.S. women in his example.

As work gets more complex, 6 rules to simplify

Mr. Morieux is a business consultant, speaking to a business audience about business examples. I certainly support the application of these themes to business. I also think that these themes are even more applicable to how a free people should organize their government. As our world becomes more complex, we have created an ever more complex government. Our government is now far too complex. What we need now is a simpler government with fewer rules (laws and regulations), and more cooperation outside of government.

A word about cooperation: it is by definition voluntary. If you need laws to force "cooperation," then it isn't cooperation. It's authoritarianism. The essence of government is coercion, which is the opposite of cooperation.

Of course, there is a yin-yang tension here. We need some amount of government to prevent anarchy and chaos. But too much government can be as bad as too little government.

There has been recent support for the idea that too much government is a problem from a surprising source: the White House. I say "surprising" because in my part of the business world, agricultural finance, we have seen more new laws and regulations during the Obama administration than during any other time in my career. By far. The Dodd-Frank Act (signed 7/21/10) and the Food Safety Modernization Act (signed 1/04/11), and the endless regulations flowing from these laws, are just two examples.

The most recent assertion out of the White House that too many rules create problems concerns land-use regulation (e.g., zoning):

A pronouncement from last summer was about occupational licensing:

I applaud this support for less government from the White House! (I wonder if they would go so far as to support Slow Government?)

Yves Morieux does not mention that much of the reason for increasing complexity in business is because it is forced on us by an overzealous government. But he is right that we in business bring much unneeded complexity on ourselves. We need to fight counterproductive complexity on both fronts: what we do to ourselves, and what we allow government to do to us.

Posted by George Putnam at Sunday, November 22, 2015 No comments: