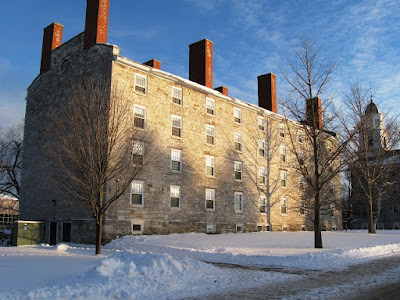 ...is the "oldest extant college building in Vermont": 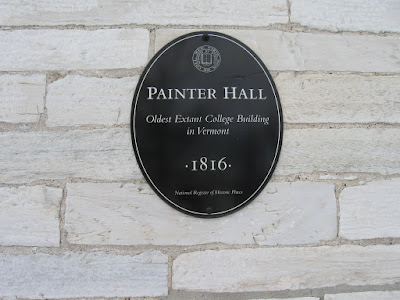 We sometimes think we have strange weather now, but it is nothing compared to 1816, also known as 1800 and Froze to Death and the Year Without Summer.

There were widespread winter conditions for several days in June across New England. Cabot, Vermont, reported a foot of snow. Cold waves returned in July and August. Most of Vermont suffered killing frosts in every month of the year, devastating crops. The total corn crop for New England was estimated to be 10% of normal. In a time when transportation options were limited, this led to widespread famine.

Abnormally cold weather was also reported in Europe, China and India—basically everywhere that humans were keeping records at the time.

The cause is thought to have been a series of volcanic eruptions beginning in 1812 and culminating with the eruption of Mount Tambora in Indonesia in 1815. It may also be relevant that the cold weather occurred during a period of low sunspot activity known as the Dalton Minimum.

For more information check out the excellent articles on The Weather Doctor and Wikipedia.

As mentioned in earlier posts, I have lately been enjoying books by C.A. Stephens with Pager. In 1908 C.A. Stephens wrote "1800 and Froze to Death" but, alas, this story is not in either of the books that we purchased for Pager.
Posted by George Putnam at Sunday, January 17, 2010 No comments:

Our backyard after the big storm last weekend: 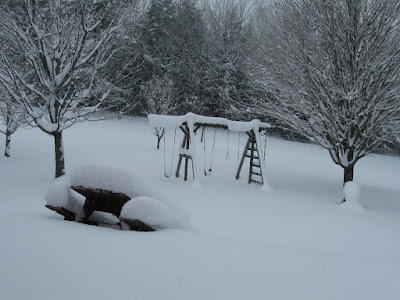 Burlington had the largest ever recorded snowfall for a single storm, with over 32" of snow. We had somewhat less here in Jeffersonville, and it was light, fluffy snow so it settled quickly. It has snowed a little more almost every day for the past week, but still mostly light, fluffy stuff. We presently have about 16" on the ground, and it's -4 F this morning.
Posted by George Putnam at Sunday, January 10, 2010 No comments:

Uh, no, in case you are wondering, I'm not a regular reader of Woman's Day magazine. I found this from reading Instapundit, who blogs about a wide variety of topics (as does his wife).
Posted by George Putnam at Saturday, January 09, 2010 No comments:

The award-winning movie A Beautiful Mind is about the life of Dr. John Nash, a mathematician who won the 1994 Nobel prize in economics for his work in game theory. The movie is about Dr. Nash's struggle with mental illness (paranoid schizophrenia). It is also a love story between Dr. Nash and his wife Alicia.

It's a wonderful movie, very moving. I recommend it. But do not think that it is all literally true. Differences between the movie and reality are discussed here. For example, the movie highlights the love between Dr. Nash and his wife as the one steady thing in his life, neglecting to mention that they were divorced from 1963 to 2001, when they remarried.

While the movie leaves out some important facts, such as the divorce, it invents others. For example, the two most moving scenes in the movie—the pen ceremony tradition at Princeton and Dr. Nash's speech at the Nobel prize ceremony—are both fictitious, completely fabricated by Hollywood (see this link).

Dr. Nash won the Nobel prize in 1994 for work done in 1950-1953, before he was married to Alicia in 1957, before the onset of his schizophrenia in 1959 (later in life than depicted in the movie), and even before the Nobel prize in economics was established in 1968. Dr. Nash shared the Nobel prize with Dr. John Harsanyi and Dr. Reinhard Selten, who did work in the 1960s that built on Dr. Nash's earlier work. Click here for a good, brief discussion of their various works that led to the prize.

The Nobel Prize web site is a wonderful source of information about Nobel Prize winners. For Dr. Nash they have the following resources:

Autobiography
Prize Seminar (good discussion of the math)
2004 Interview (discusses the movie, among other things)
Photo Gallery
Other Resources

The autobiography is fascinating. A piece of trivia from it: he had a choice of attending graduate school at either Harvard or Princeton. He chose Princeton because "the Princeton fellowship was somewhat more generous since I had not actually won the Putnam competition." (Several top scorers in the Putnam competition win a monetary prize, but only one winner is awarded a scholarship for graduate studies at Harvard, the alma mater of William Lowell Putnam.)

UPDATE 9/26/10: I found this cartoon about Nash and Feynman amusing (source):

It's funnier if you've watched the movie A Beautiful Mind and if you know a little about Richard Feynman.
Posted by George Putnam at Saturday, January 02, 2010 No comments: