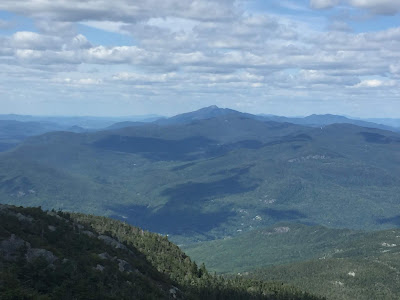 Camels Hump is perhaps Vermont's most iconic mountain. It is on the Vermont quarter. Nancy and I climbed Camels Hump today via the Burrows Trail from the Huntington (west) side.

While this post does not include any photos of Camels Hump (click here for that), it includes several photos from Camels Hump. The photo above is from the summit looking north at Mount Mansfield. The photos below are also from the summit: looking east at the White Mountains of New Hampshire (Mount Washington is dimly visible); looking south at Killington Peak; and looking west at the Champlain Valley, Lake Champlain, and the Adirondacks of New York. 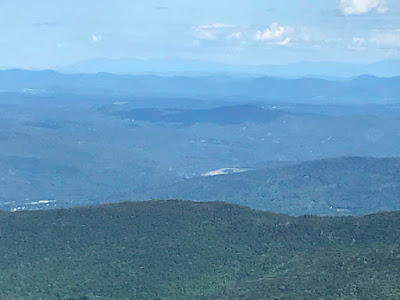 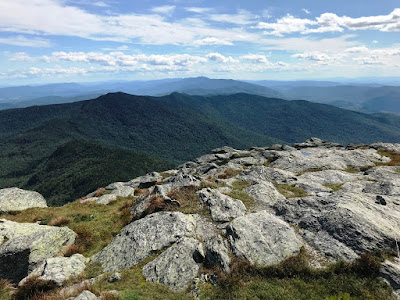 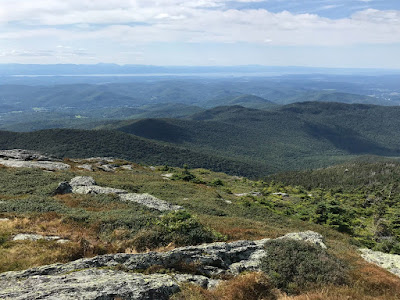 The photo below is from the Hut Clearing near the summit. The plaque says that Camels Hump was designated a "Registered Natural Landmark" in 1968: 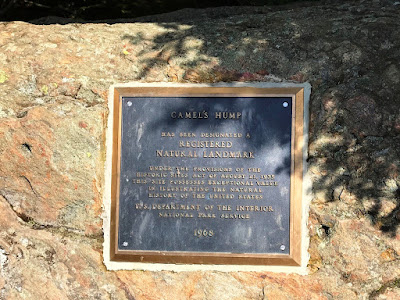 In my blog post about that hike on Mount Mansfield, I mused about how "natural" the summit ridge was. Mount Mansfield is reasonably natural, but Camels Hump is more so. There are no communications towers, no ski area, no visitors center, and no road to the top. Consequently it is a popular hike, with several trailheads that are easily accessible. We saw numerous other people enjoying the trails and the summit today, even though it was a weekday. It didn't hurt that it was a beautiful day, not too hot or humid.

Posted by George Putnam at Thursday, August 23, 2018 No comments: 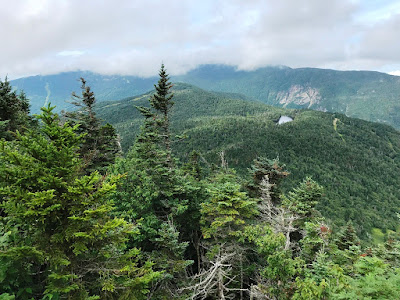 Smugglers Notch is a mountain pass that separates Mount Mansfield to the south from the Sterling Range to the north. The Long Trail crosses Smugglers Notch on its way from Massachusetts to Canada along the spine of Vermont's Green Mountains.

Mount Mansfield, Vermont's highest peak at 4395', is a frequent hiking destination for our family, but today Nancy and I hiked north from Smugglers Notch. We positioned cars so that our hike wasn't the full 15 miles mentioned above, but "only" 11.1 miles. This section of the LT involves much up-and-down. There are four ascents (Sterling, Madonna, Morse-east slope, and Whiteface) with total elevation gain of 2500'.

When we reached Sterling Pond early in the hike, we encountered a couple who had been watching a bull moose swimming in the pond, but he was gone by the time we arrived and we did not see him. Shortly thereafter we encountered people setting up for a trail race sponsored by Smugglers Notch Resort and Ironwood Adventure Works – the 1st Annual Smuggs Mountain Race, a 25K running event on ski trails with 5000' elevation gain. That's a workout!

The photo below was a sign from the trail race, where the LT crosses the Drifter ski trail on Madonna Mountain, part of Smugglers Notch Resort: 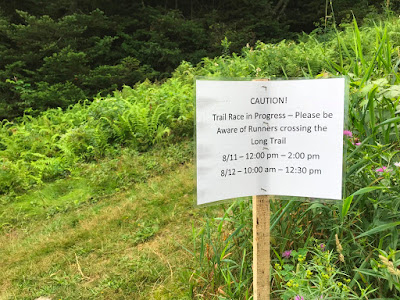 We took Drifter instead of the LT to the summit of Madonna Mountain, because the view from Drifter looking south at Mount Mansfield is spectacular. That is the photo at the top of this post, taken from where Drifter turns a sharp corner high on Madonna Mountain.

From this viewpoint, one can normally see the entire ridgeline of Mount Mansfield, from the Chin to the Nose, but today it was in the clouds. Sterling Pond is visible in the photo above, and directly behind the pond are the thousand foot high cliffs of Smugglers Notch.

We saw the first runners in the trail race on top of Madonna Mountain, where we picked up the LT north again.

We hiked by three shelters on the LT today: Sterling Pond Shelter, Whiteface Shelter (below), and Bear Hollow Shelter. 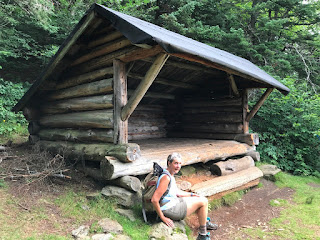 The high point on our hike was Whiteface Mountain (photo below) but it is a wooded summit and there are limited views there: 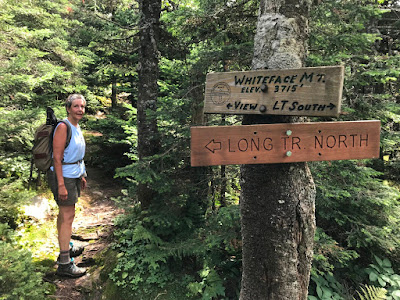 Interestingly, the 2017 Long Trail Guide says we were on top of "Sterling Mtn. (also known as Whiteface Mtn.)." That's the first time I've heard it called Sterling Mountain. I've always heard it called Whiteface Mountain, as in the sign above, the highest mountain in the Sterling Range.

When we reached the top of Whiteface Mountain we were only 5.4 miles into our 11.1 mile hike, but the ascents were behind us. It was all downhill from there to our car.

Both Nancy and I have hiked parts of this section of the LT many times together, and the whole 11 miles with other people, but this was the first time the two of us hiked the entire 11 miles together. We reminisced about the many adventures that various members of our family, especially Laura, have had on this section of trail. My own adventures include outings as a Boy Scout in the 1960s and as a Boy Scout leader thirty years later. It's a wonderful, if rugged, section of the Long Trail. 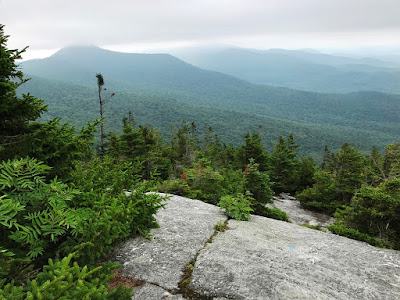 We parked at the Underhill State Park and hiked up the CCC Road and Maple Ridge Trail to the Forehead. From there we hiked north on the Long Trail along the ridge of Mount Mansfield past the Nose, and then down the Halfway House Trail back to the CCC Road and the state park. Unlike our hike last month, we did not go over the Chin, the highest point on the mountain (and in Vermont) at 4395'. Our highest elevation today was the Forehead at 3940': 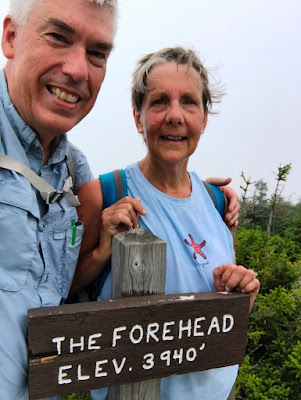 We were in the clouds on the Forehead. The photo at the top of this post is from part way up the Maple Ridge Trail looking south toward Dewey Mountain (3371'). Lost somewhere in the distant clouds are Bolton Mountain and Camels Hump.

The rest of this post is about past and present developments on Mount Mansfield along the route of our hike today.

On the ridge we walked past this marker: 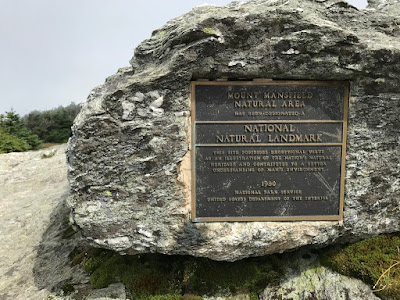 It identifies the "Mount Mansfield Natural Area" as a National Natural Landmark. Not far from this marker is the Summit Station and Mount Mansfield Visitor Center at 3849': 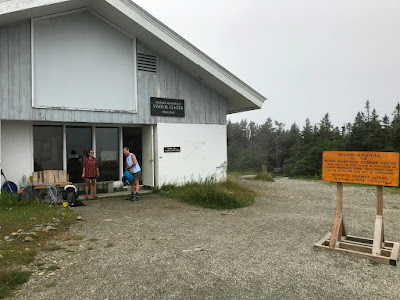 At this location near the base of the Nose, the Summit House offered summer accommodations from 1858 to 1958. Also known at times as the Tip Top House, the Mountain House, and the Mt. Mansfield House, this hotel had 50 guest rooms at its largest extent. Guests arrived originally by horse or foot, later by automobile. The Summit House was intentionally burned in 1964 after falling into disuse and disrepair.

The Summit House was a major attraction in its day, one of numerous "grand hotels" in the mountains of New England.

One distinguished guest, the famous American poet and essayist, Ralph Waldo Emerson, described how in the morning following his overnight stay "a man went through the house ringing a large bell, and shouting Sunrise." In response guests rumbled out of their beds to climb the Nose for a pre-breakfast view of the sun's emergence.

The Halfway House Trail starts on the CCC Road 1.2 miles from the parking area at the Underhill State Park. The Civilian Conservation Corps built both the Underhill State Park and the CCC Road in the 1930s and early 1940s. The CCC Road was not a route up the mountain, but a road along the side of the mountain at an elevation of about 2500'. The road was intended to connect the state park to Nebraska Notch at the southern end of Mount Mansfield, but only a portion of the planned road was built. The project was abandoned when the CCC was ended in 1942 because of World War II. Today the CCC Road is part of the hiking trail system on the west side of Mount Mansfield: 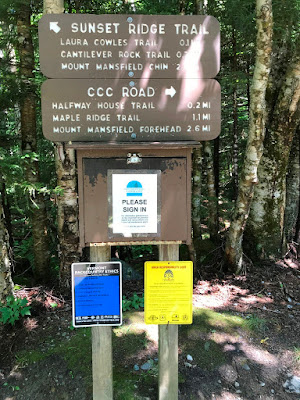 Is the summit ridge of Mount Mansfield more "natural" today than it was in the era of the Summit House? When Nancy and I left the Mount Mansfield Visitor Center at the top of the Auto Toll Road at 11 AM today, the caretaker there had already registered 88 visitors for the day, who arrived either by trail or by the road (the majority). And the trail up the Nose that captured Emerson's attention at sunrise is now permanently closed because of radiation from nearby communications towers: 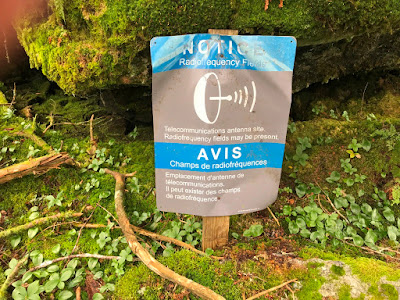 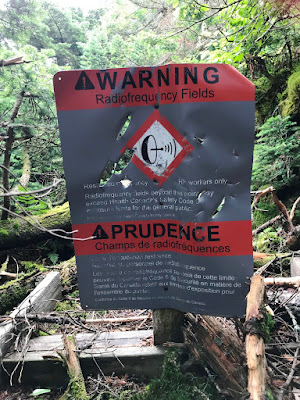 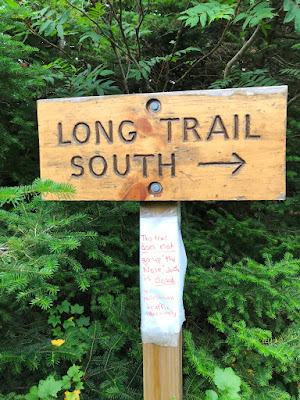 The signs in the three photos above are all near each other at the base of the Nose. The signs in the top two photos warn of radiofrequency fields. The hand lettered white sign on the post below "Long Trail South" says:

This trail does not go up "the Nose," which is closed to pedestrian traffic indefinitely.


I can remember hiking the short side trail over the Nose (4060'), but it was a long time ago. That trail, called the Triangle Trail, was closed in 1997 when the power of the nearby broadcasting facilities was increased.

I have no photos from today's hike of the antennas near the Nose because we were in the clouds. Click here for a description of the broadcasting facilities in this area (as of 2011). They are impressive. There are several photos at that link.

The quote about Ralph Waldo Emerson came from this book, page 60. This book has photos of the Summit House and the Halfway House on the Underhill side.

This source has considerable information about the activities of the CCC at Underhill State Park.