Justin Smith Morrill represented Vermont in the U.S. Congress for 44 years in the last half of the 1800s, first as a representative and then as a senator. He is most well known for the Morrill Land-Grant Colleges Act of 1862 that established the land grant university system.

Senator Morrill was born 200 years ago in Strafford, VT. In 1848-1851 he constructed the Morrill Homestead in Strafford, which since 1960 has been a National Historic Landmark. Nancy and I visited it on July 25: 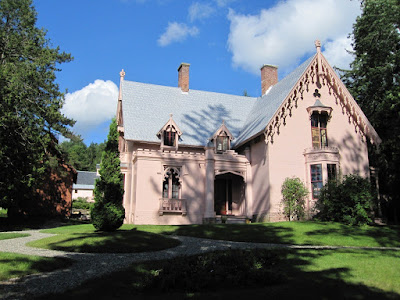 We did not do the house tour (perhaps we should have) but we did do the self-guided tour of the grounds. There was a well-done interpretive display about Senator Morrill's life and accomplishments in the carriage barn. It was an interesting historical site, and I recommend it. The site is open only part of the time, so be sure to check the official web site for hours of operation.

Senator Morrill is in the Vermont Agricultural Hall of Fame. Many land grant universities today have a Morrill Hall in honor of Senator Morrill, such as this one at UVM.

Here's something I learned while researching this post: MIT is a land grant university!
Posted by George Putnam at Saturday, July 31, 2010 3 comments:

Nancy and I attended a reunion of a branch of the Putnam family on July 25. This branch of the family includes four Putnam sisters who grew up in Bethel, VT: Fran, Margaret, and the twins Loraine and Louise. The reunion was held at the farm of Fran and Art Hyde in Bradford, VT. Below are Fran, Nancy, Art, me and Loraine: 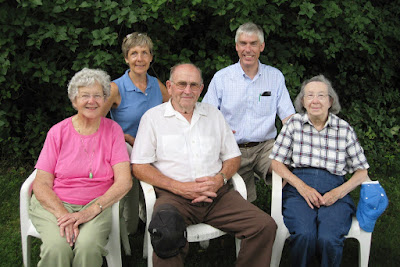 We have two other connections to Fran and Art. Fran Putnam was maid of honor at the wedding of Nancy's parents in 1953. And Art Hyde was a Farm Credit director for some 26 years, including a few years as chairman of the board of the Farm Credit Banks of Springfield in the 1970s. That was before my time at Farm Credit, as I started in 1984, but we had good discussions about Farm Credit.
Posted by George Putnam at Saturday, July 31, 2010 No comments:

Nancy and I hiked to Beaver Meadow Lodge today: 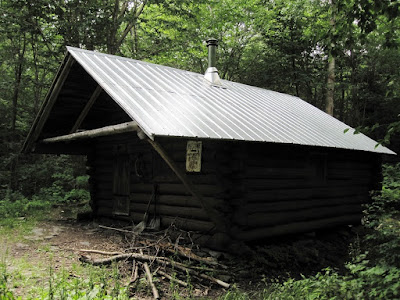 The outhouse has a nice view of the woods: 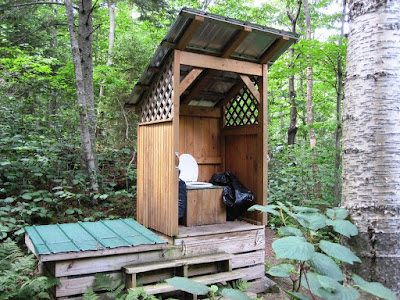 Caring for Your Introvert

An interesting column from the March 2003 issue of The Atlantic: "Caring for Your Introvert" by Jonathan Rauch.

That column was one of the most popular pieces ever posted on The Atlantic, as noted in this follow-up interview with Mr. Rauch in February 2006: "Introverts of the World, Unite!"

What's the difference between an extrovert and an introvert? Extroverts are energized by talking with other people. That tires out introverts. Extroverts are bored by solitary thinking, while introverts thrive on it. No one is completely at either extreme, of course, but people often have definite tendencies in one direction or the other.

The second page of the interview gets into some interesting subjects, like geeks. It also mentions how introverts typically don't enjoy making small talk about the weather. I agree with that, and would add another topic: sports. Small talk about sports permeates our society, but it is often of little interest to an introvert.

So if you are an introvert, keep your chin up. There's nothing wrong with you, and you are not alone!
Posted by George Putnam at Sunday, July 11, 2010 No comments:

The Farm at Hildene

The farm at Hildene opened the new Rowland Agricultural Center in 2009: 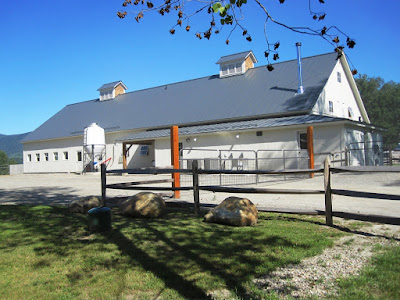 The Center features cheesemaking facilities, a classroom, solar energy (panels on the other side of the roof) and a wood burning furnace (that's the smokestack through the roof). And not for cows, but for Nubian goats: 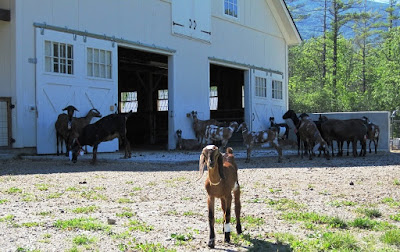 Quite well-behaved and friendly goats, too. Here a couple of kids try unsuccessfully to get some food from Emily: 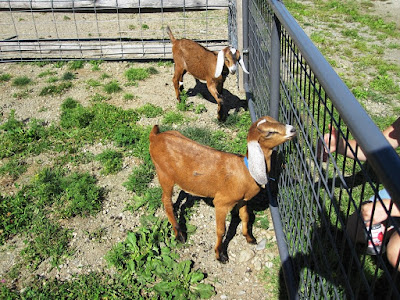 The goats are milked in this milking parlor, six at a time: 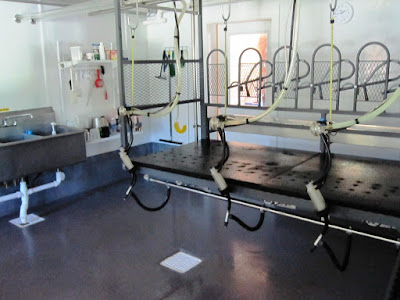 One of the lesser-known treasures in Vermont is Hildene, the historic summer home of Robert Todd Lincoln in Manchester: 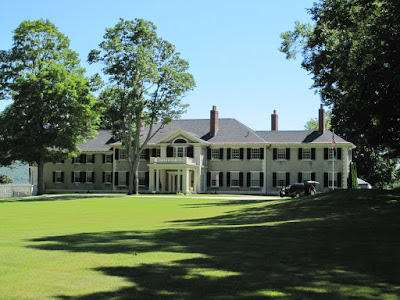 Robert Todd Lincoln was the only child of President Abraham Lincoln to survive to adulthood. He was a successful lawyer and businessman associated with the Pullman Company in Chicago. He also served as Secretary of War under Presidents Garfield and Arthur (1881-1885) and ambassador to Britain under President Harrison (1889-1893).

The Pullman Company, founded by George Pullman, was famous for manufacturing sleeper railroad cars. Mr. Pullman hired Robert Todd Lincoln as general counsel, and Mr. Lincoln became president after Mr. Pullman's death. Much company business was conducted at Hildene. Financial reports from the company are on display there.

Robert Todd Lincoln died at Hildene in 1926. His descendants lived there until the last one died in 1975. The site is now beautifully maintained by the Friends of Hildene. In the back of the house is a formal garden laid out in the style of a stained-glass cathedral window: 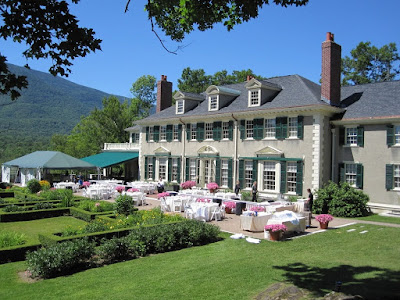 There are no overnight accommodations at Hildene, but they do host corporate dinners and weddings. Nancy, Emily and I visited on July 3rd. What a beautiful day for a wedding! The photo above shows the setup for a wedding reception in the formal garden. (The setup for the actual wedding ceremony, not shown, was at the other end of the formal garden.) Elsewhere on the property, they were setting up for a rehearsal dinner for a different wedding to be held the following day.

The docents at Hildene helpfully explained much about the property including the contents of the house. We listened to music on the 1000-pipe Aeolian player organ. A young man talked to us about the many books there, which he had catalogued, including the complete works of William Shakespeare and folios of all of the works in the Louvre. One of the things discovered in the house when it was restored was Robert Todd Lincoln's notes from when he had his mother, Mary Todd Lincoln, committed to a psychiatric asylum. One room in the house was set up museum-style to showcase President Lincoln's Second Inaugural Address.

Robert Todd Lincoln was an avid amateur astronomer, and the estate included an observatory with a 6-inch refracting telescope which we were told is still occasionally used. Mr. Lincoln also maintained a farm at Hildene. Major changes have recently been made to the farm, but that deserves its own post.
Posted by George Putnam at Sunday, July 11, 2010 No comments: