Elton John and Billy Joel are performing together in a series of concerts this year, called their "Face 2 Face" tour. We saw their concert in Gillette Stadium (where the Patriots play) in Foxboro, MA on July 18th. They have toured together before; Billy Joel said it was 15 years ago to the day that they last performed together in Foxboro Stadium (it was a different stadium then).

The wild tailgate party before the concert: 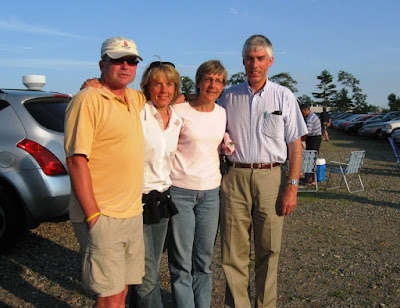 The weather was perfect, and the crowd was enthusiastic but well behaved. The stadium holds 68,000 people. While there were no people in the sections behind the stage, the rest of the stadium appeared full and there were many people seated on the field. So I'd say there were close to 68,000 people there.

The rest of the photos are from Nancy's cell phone. I didn't take my camera into the stadium (should have, everybody else did). We had seats in the 105 section. Binoculars were useful (good idea, Nancy). I figured we were about 150 yards away from the stage: 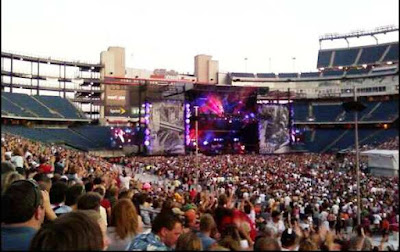 The stage had elaborate lighting effects: 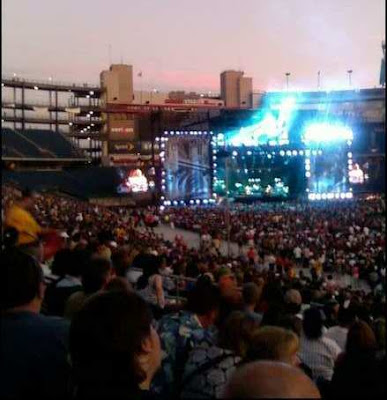 The audience danced and sang along with many of the songs. The photo below is looking away from the stage, and is illuminated only by the lights from the stage. It's late in the show, and everyone is on their feet: 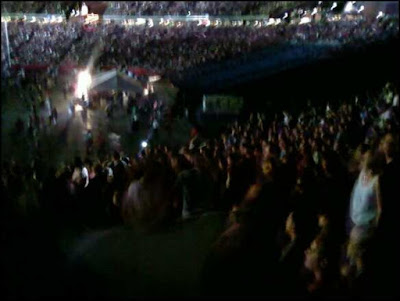 The concert ran from a little before 8:00 to around 11:00. No warmup, and no breaks. Grand pianos and other band members went up and down through the stage floor as needed. When Elton John and Billy Joel played together, their two grand pianos were "face to face." It was a good performance. See below for the setlist.

We were lucky. EJ and BJ played at Wrigley Field in Chicago both before and after their performance at Gillette Stadium (7/16 and 7/21). But since then Billy Joel has become sick with flu-like symptoms and two performances in New York have been canceled (Buffalo on 7/24 and tomorrow--7/27--in Albany).

Here is the setlist from the concert:

Many in the audience left the stadium after the concert singing Piano Man.
Posted by George Putnam at Sunday, July 26, 2009 No comments:

Emily is planning to hike the Long Trail with her friend Heather in August, and she has been doing a great job getting Nancy and me to join her on warm-up hikes. On July 12th we climbed Mt. Mansfield. It was one of the few nice days so far this summer! 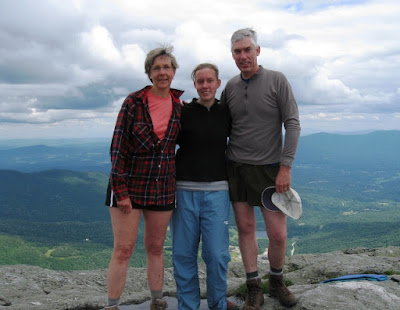 This is a view of the new Stowe Mountain Lodge which opened a year ago. The front part of the lodge is complete, but they are still constructing an additional wing out back: 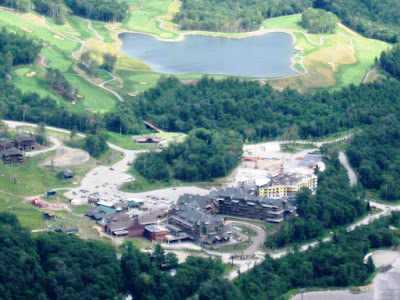 The lodge (along with the rest of Stowe Mountain Resort) is owned by AIG, so it will be interesting to see what happens to it as AIG deals with its troubles. 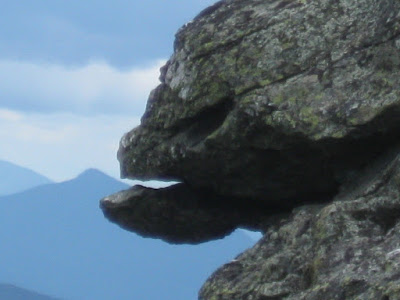 All three photos were taken on the Chin. We hiked up the Laura Cowles Trail and down Sunset Ridge Trail.
Posted by George Putnam at Sunday, July 26, 2009 No comments:

Music in the Meadow

Stowe Performing Arts is putting on four outdoor concerts this summer in the Concert Meadow at the Trapp Family Lodge. We attended the first concert, a performance by the Vermont Symphony Orchestra, on July 5th. Nancy's cousin Bonnie joined us. It rained early in the day, but cleared up nicely for the concert: 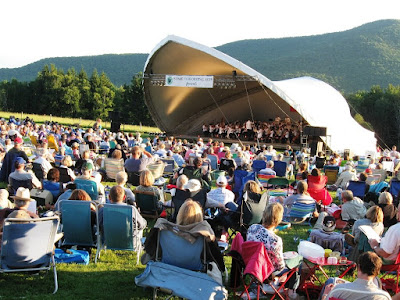 A nearly full moon rose to our left during the concert: 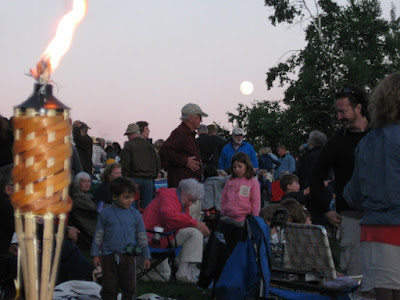 The theme of the concert was "The Lake Effect," and every song had a water theme. This was in recognition of the quadricentennial celebrations this year of Samuel de Champlain's voyage and discovery of Lake Champlain in 1609. Some of the songs were Waves of the Danube, Russian Sailors Dance and selections from South Pacific. Afternoon became evening: 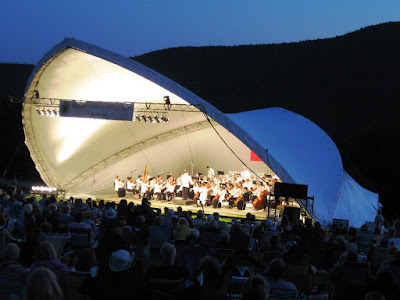 The concert closed with the 1812 Overture and Hands Across the Sea, with fireworks: 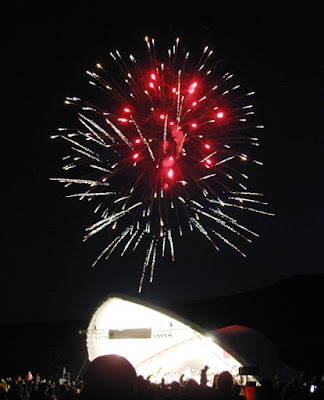 After all, it was the Fourth of July weekend!
Posted by George Putnam at Sunday, July 26, 2009 No comments:

Brian and I went shooting on June 28th at the Sportsman's Club of Franklin County. Brian with his .222 Encore rifle: 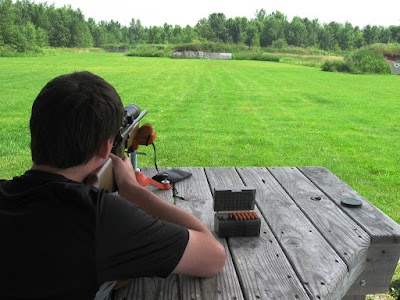 We shot paper targets and milk jugs full of water, mostly at 100 yards: 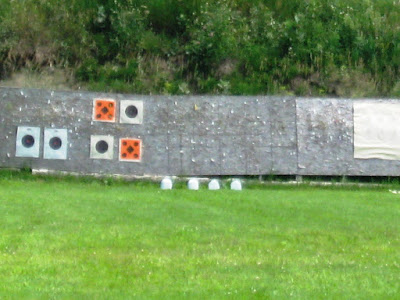 The photo above is the "before" photo, and the photo below is the "after" photo, showing a hit on the milk jug on the far right. If you look carefully, you can see a column of water directly above where the jug used to be, and a spray of water above and to the right. The blast knocked over the milk jug to the left of the one that was hit. 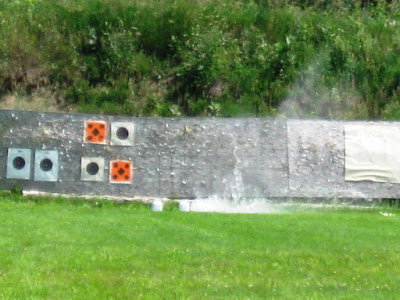 Below is a video of a hit on a different milk jug:

On June 14, 2009, we hiked to Roundtop Shelter on the Long Trail. Here is the view from the shelter, looking out toward Waterville (which isn't visible because it's behind a hill): 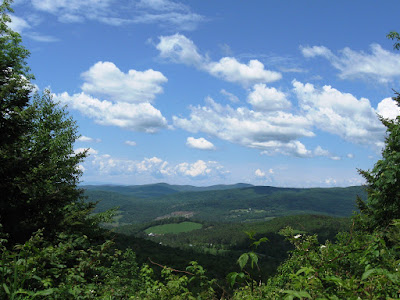 Note the field just left of center, with a barn at the lower left. This is the Lyle Locke farm on the Plot Road. If you enlarge the photo (a lot), you can see cows in the field. 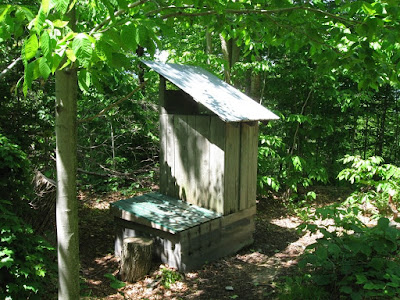 The purpose of the hike was to find Pink Lady's Slippers. Nancy and Emily had heard that there were a lot on this trail. Sure enough, we had no trouble finding them: 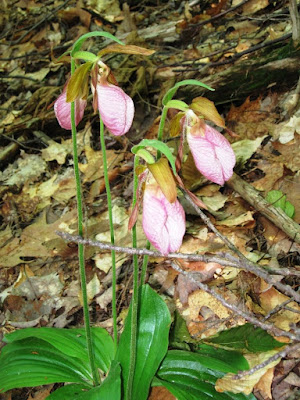 The Pink Lady's Slipper is the state wildflower for New Hampshire.
Posted by George Putnam at Sunday, July 26, 2009 No comments:

We had a wild party at home! 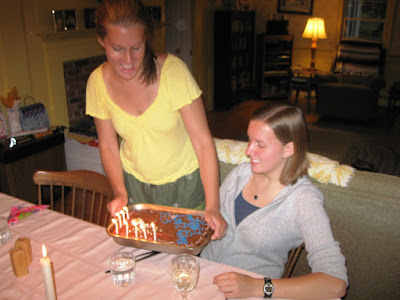 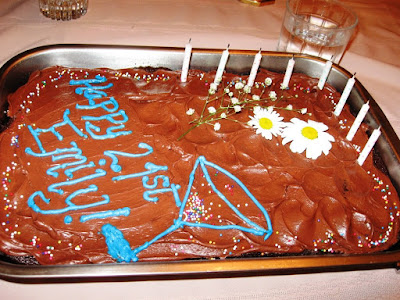 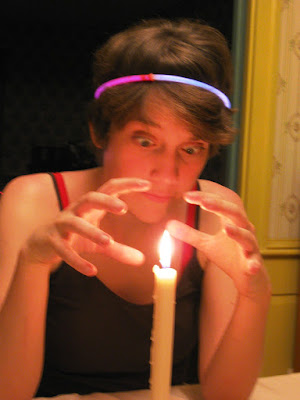 This was last month, of course. I'm behind in my blogging.
Posted by George Putnam at Sunday, July 26, 2009 No comments:

What is a boy?

Laura recently found this in our attic. I had forgotten about it. It was on the wall in the farm house when I was growing up (click on the photo to enlarge): 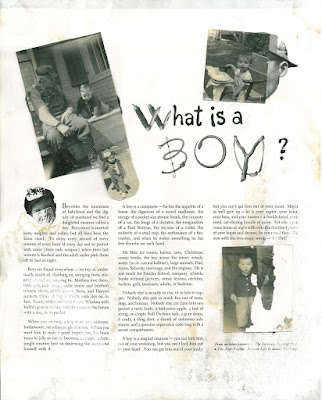 The old man is J. Kinsley Putnam, Pager's father. Beth, Bill and I think that the baby boy in all the photos is John. That would make sense. John was #2, and the first boy. I think Mother found him a LOT different from Beth. And then there were two more boys after John! Mother never had a brother, having grown up with only sisters. I think she found raising boys an unexpected adventure, one that she wasn't initially prepared for, and my guess is that she put this up on the wall to help her keep her sanity.
Posted by George Putnam at Wednesday, July 15, 2009 No comments:

One of my concerns about modern government is that there are too many words expressing too many rules. No one can possibly read all the words, let alone follow all the rules. But it's even worse than that, as described in this opinion column in yesterday's Boston Globe:

Lawmakers, read the bills before you vote

The people making all those rules don't read all those words themselves!
Posted by George Putnam at Monday, July 13, 2009 No comments:

On May 25, 2009 (Memorial Day) we climbed Sterling Mountain. Sitting on the (stationary) chair lift on top: 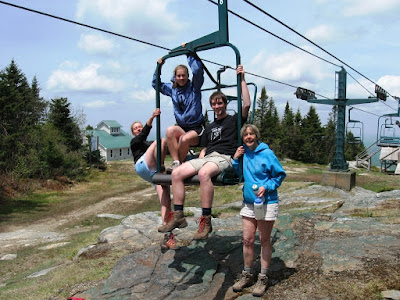 Climbing Sterling is not unusual for us. We hike up Sterling a lot. What was unusual on this trip was that we hiked over to Watson Camp on the north side of Sterling Pond, and found it on the ground: 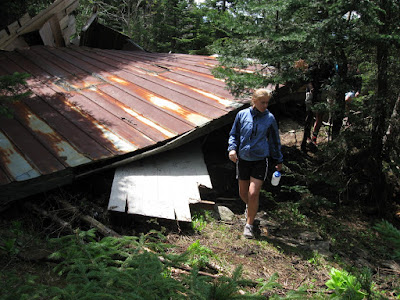 The Green Mountain Club has been talking about removing this camp for a while, so I think the camp was taken down intentionally. From their web site: "Other things we hope to get to in 2009, depending on funding and the number of volunteers available: ...completing the dismantling and removal of Watson Camp..."

I cannot find a history of Watson Camp online. But my recollection is that Thomas J. Watson, Jr. bought land on top of Sterling Mountain and built this camp as a private camp. He later gave the land and camp to the GMC. I remember being told that this was the first land (about 1/2 acre) that the GMC ever owned, and for some years it was the only land they owned. (Now they own a lot of land.) I believe that a related part of the story is that the reason there is an IBM plant in Essex Jct. is that Mr. Watson liked skiing at Smugglers Notch Ski Area, and he reasoned that at least some IBM employees might like to live nearby. (As noted in the link, Mr. Watson had a great deal to do with starting the Smugglers Notch Ski Area.)

On a different subject, but the same hike, here is a photo of the hunter and his dog in Smugglers Notch (the dog is in the trees): 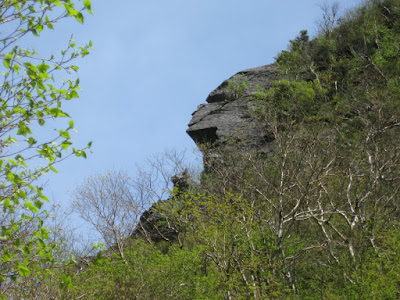 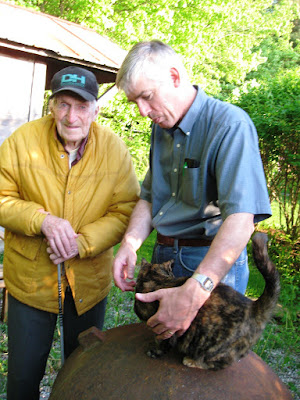 The photo isn't about the lilacs; it's about the cat, which had hopped up on the potash kettle for some attention.
Posted by George Putnam at Saturday, July 11, 2009 No comments: