Jon Stewart has some fun with the topic of money:


Jon Stewart makes fun of Ben Bernanke of the Federal Reserve (Fed) for giving different answers at different times to the question: is the Fed printing money?

Jon Hilsenrath of the Wall Street Journal sorts it out: Is the Fed Printing Money?

Mr. Hilsenrath talks about reserves, which is money that banks have on deposit at the Fed. He mentions that reserves have increased from $33B to $1T, an increase of more than 30 times, in less than two years.

A graph makes his point even clearer (source): 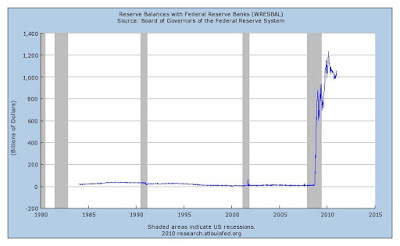 Clearly something dramatic changed with the financial crisis of 2008.

It's good that commentators like Jon Stewart question the Fed's actions. If the Fed doesn't get this right, it could have significant adverse consequences for the economy.
Posted by George Putnam at Friday, December 24, 2010 No comments: