The "Freedom and Authority" discussion of the play Copenhagen at Parents Weekend at Colorado College on Oct. 11, 2008 was most interesting.

There are several posts on this blog about the play and the discussion.

Before Parents Weekend, I wrote 4 posts about the play:

After Parents Weekend, I wrote 3 posts about the discussion:

The most interesting part to me was what we didn't talk about.
Posted by George Putnam at Friday, October 31, 2008 No comments:

Concluding comments on the "Freedom and Authority" discussion on 10/11/08 at Colorado College about the play Copenhagen...

In my discussion group we talked a lot about uncertainty (Heisenberg's contribution), but we never talked about complementarity (Bohr's contribution). Both were central themes of the play.

In quantum mechanics, complementarity refers to the wave-particle duality of matter and energy. Einstein showed that matter can be converted into energy and vice versa. Quantum mechanics showed that matter and energy have both particle-like characteristics and wave-like characteristics. The principle of complementarity states that "a single quantum mechanical entity can either behave as a particle or as wave, but never simultaneously as both; that a stronger manifestation of the particle nature leads to a weaker manifestation of the wave nature and vice versa."

As I mentioned in an earlier post, it is dangerous to apply scientific concepts beyond their original meaning. But we do it all the time: the discussion of uncertainty as applied to human thoughts, intentions and memories is far beyond the mathematical expression of the uncertainty principle that Heisenberg developed. (See equations here.) Nevertheless we try to extend scientific principles into other areas because it seems to ring true. We should always keep in mind that it might not be true.

The application of the principle of complementarity beyond quantum mechanics was supported by Bohr himself:


Complementarity means that nature exhibits a duality. Quantum mechanics shows this at the most basic level of nature: elementary particles exhibit a wave-particle duality. Bohr was not the first to notice that nature often exhibits a duality: night-day, life-death, male-female. This idea goes back at least to the concept of yin and yang in ancient Chinese philosophy.

The highest order of the Danish government is the Order of the Elephant, awarded to Danish royalty and sometimes to foreign heads of state. It is rarely awarded to a commoner. It was awarded to Niels Bohr in 1947. (Tycho Brahe was another Danish scientist awarded this order in 1578.) Being a commoner, Bohr did not have a coat of arms and upon receiving the order he designed his own. His coat of arms featured the symbol of yin and yang at the center, and the Latin motto contraria sunt complementa (opposites are complementary).

Here is a picture (source): 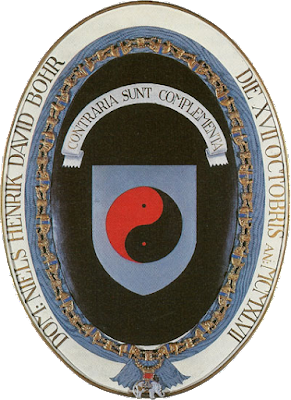 Like the theme of uncertainty, a theme of complementarity also runs through the play: friend-enemy; mentor (Bohr) and mentee (Heisenberg); skiing fast (Heisenberg) vs. skiing slow (Bohr); mathematics (Heisenberg) vs. language (Bohr); Bohr and Heisenberg working together vs. working apart.

This theme of complementarity is particularly interesting given the context of the discussion itself at Colorado College. What better example of complementarity than "Freedom and Authority"?
Posted by George Putnam at Wednesday, October 15, 2008 1 comment:

Continuing comments on the "Freedom and Authority" discussion on 10/11/08 at Colorado College about the play Copenhagen...

The discussion in my small group centered on three topics: morality, friendship and loyalty, and uncertainty.

I did not find the discussion of the first two topics interesting. There was much talk, but no enlightenment.

A theme of uncertainty runs through the play: the uncertainty of our thoughts, intentions, memories. On this theme, one woman in our discussion group said that if you have ever kept a diary at any point in your life, and then you go back to read it years later, you will find that it is not what you keep in your head as memories from that time. I have noticed this myself when reading something that I wrote years earlier. Sometimes we remember incorrectly, but more often we simply forget. And if we cannot always remember accurately things that we took the trouble to write about at the time, how much less accurate is our memory of things that we didn't bother to write about at the time?
Posted by George Putnam at Wednesday, October 15, 2008 No comments:

The discussion of the play Copenhagen, by Michael Frayn, at Parents Weekend at Colorado College this past weekend was interesting. (See also the four posts in September, before Parents Weekend, about this play. First post here.)


The course revolves around the quintessentially liberal arts questions, “What do I think and believe? And why?” “What is the balance between individual freedom and religious, social and political authority?” (source)


Originally a senior level course, it is now part of the First Year Experience program at CC.

I would guess that 150 people attended the discussion of Copenhagen. After some introductory remarks, we were split up into groups of 20 or so. We were supposed to discuss for 45 minutes in our small groups and then return to the larger group. My group talked for so long that we missed the larger group discussion at the end. I did not make any comments. There were plenty of other people who wanted to talk more than I did.

William Davis, professor of comparative literature and German, gave the introductory remarks. History professor David Torres-Rouff led the discussion in the small group I was in.

Slightly more than half of the overall group was alumni, and most of the rest were parents. In my discussion group, there was one freshman student. Prof. Torres-Rouff was the third youngest person in my discussion group (after the freshman and a 5-year alum); he was in his late 30s. There were lots of alumni from the 1960s.

One more thought on Freedom and Authority: the topic is similar to the Vermont state motto—Freedom and Unity. What is the proper balance between individual freedom and group unity?
Posted by George Putnam at Wednesday, October 15, 2008 No comments: