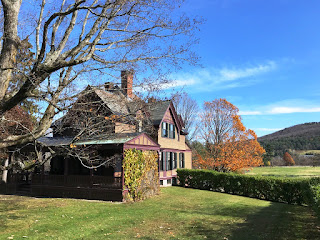 The Billings Farm and Museum in Woodstock, Vermont, is a wonderful place to visit on a nice fall day – or anytime when it is open. This is a working farm, with cows, sheep, chickens and draft horses, as well as modern tractors to work the fields that grow the crops to feed the animals. The Jersey cows raised and milked here have been winning awards since the 1893 World's Columbian Exposition in Chicago. Some of the milk from the farm goes to Grafton Village Cheese Company where it is made into three different kinds of cheddar cheese with the Billings Farm label. Nancy and I purchased some Woodstock Reserve Cheddar when we visited yesterday.

The Billings Farm and Museum is also a museum of farm life as it existed on Vermont hill farms around 1900. The indoor exhibits contain a wide variety of farm machinery and implements. I do not recall ever seeing a more complete or better preserved collection. Both Nancy and I remarked how much fun it would have been to have toured the exhibits with our fathers, and hear their stories of growing up with some of those implements on farms in Cambridge and Royalton in the 1920s and 1930s. The museum also includes exhibits about life in the home and community, including a country store and even a display about town meeting.

Frederick Billings (1823-1890) grew up in Royalton and Woodstock, becoming a lawyer before heading west in the gold rush of 1849. He made a fortune in California, and returned east to New York City in 1861. He also made money in the railroad business (Northern Pacific Railway) in the 1870s and early 1880s.

Billings loved Woodstock, and in 1869 he purchased the 270-acre farm belonging to the family of George Perkins Marsh. Billings poured resources into the farm, which eventually grew to nearly 1,000 acres and more than 100 workers. A significant part of the early success of the Billings Farm was farm manager George Aitken, whom Billings hired in 1884. The photo above is the fully restored 1890 farm house built for George Aitken and his family. The house included an office for the farm manager, a creamery in the basement for the production of butter, and an attached ice house for butter storage. Aitken was farm manager until his death in 1910.

After Billings died in 1890, the farm was carried on by his widow and daughters. The Great Depression brought hard times to the farm, but it also brought the 1934 wedding in Woodstock of Mary French, a granddaughter of Frederick Billings, to conservationist Laurance Rockefeller. They inherited the farm when Mary's mother died in 1951 and set about modernizing it. They opened the Billings Farm and Museum to the public in 1983, nearly 50 years after their wedding and nearly 100 years after George Aitken had been hired by Mary's grandfather.

Frederick Billings and the Rockefellers were influenced by the life and writings of George Perkins Marsh, mentioned above. George Perkins Marsh (1801-1882) was a brilliant scholar and diplomat who had grown up on that farm. At the time Billings purchased the farm from the Marsh family in 1869, George Perkins Marsh was serving as the United States ambassador to Italy, a post he held from 1861 until his death in 1882.

In 1864 George Perkins Marsh published the book Man and Nature about the effect of human action, especially deforestation, on the environment. This influential book helped launch the modern conservation movement. Frederick Billings saw themes in this book that resonated with his observations in the denuded gold fields of California and even in his native Vermont at the time. Billings established his model farm in Woodstock, on the farm where Marsh had grown up, to demonstrate "principles of efficiency, sustainability, and responsible land use" as espoused by Marsh. (source) Succeeding generations continued this conservationist ethic on the Marsh farm as noted above.

Today the Billings Farm and Museum is on one side of Route 12 and the Marsh - Billings - Rockefeller National Historic Park is on the other side. They are both well worth a visit.

UPDATE 11/01/17: For more about George Perkins Marsh, see this post on my other blog.

Posted by George Putnam at Saturday, October 28, 2017 No comments: