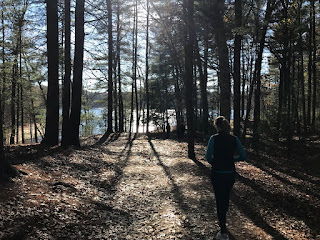 I went to the woods because I wished to live deliberately, to front only the essential facts of life, and see if I could not learn what it had to teach, and not, when I came to die, discover that I had not lived.


Henry David Thoreau wrote those words in Walden; or, Life in the Woods about living in a small cabin near Walden Pond in Concord, Mass. The photo above was taken from where his cabin was located. Walden Pond is visible through the trees.

We visited Walden Pond State Reservation over the Thanksgiving holiday. Thoreau's original cabin no longer exists, but a replica stands near the park entrance, along with a statue of Thoreau: 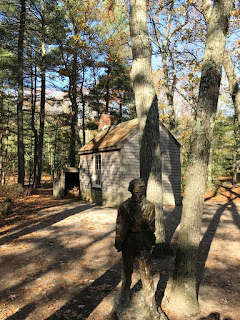 Below is a better photo of the statue: 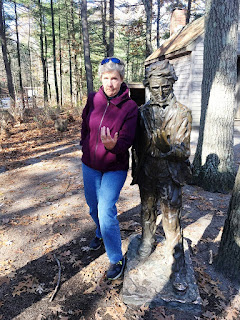 Our timing was fortunate. There is considerable interest in Henry David Thoreau this year, the 200th anniversary of his birth. The park features a new (2016) visitor center with informative exhibits, a gift shop well stocked with books, and a very new* Ken Burns documentary film. You can watch the film at the link.

*The film premiered at Boston College on November 8, 2017.

We celebrated Thanksgiving this year in Cambridge, MA instead of Cambridge, VT. There is another notable pond in Cambridge, MA – Fresh Pond, part of the municipal water system for Cambridge. The photo below is Fresh Pond at dusk, with a sliver of a new moon reflected in the water. 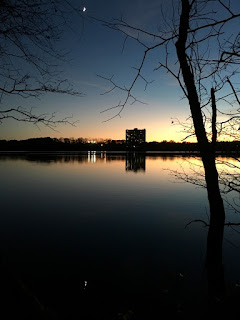 Fresh Pond and Walden Pond are about 12 miles apart. Both ponds are heavily visited by the public, but they are quite different. Walden Pond retains its rural character, while Fresh Pond is surrounded by development. One can swim and fish at Walden Pond, but not at Fresh Pond. On the other hand, no pets are allowed at Walden Pond, while dogs are numerous on the path around Fresh Pond.

In the photo below, the building is the Cambridge Water Department on the edge of Fresh Pond. The sign says "Envision Cambridge" and the bicycles are part of Hubway. 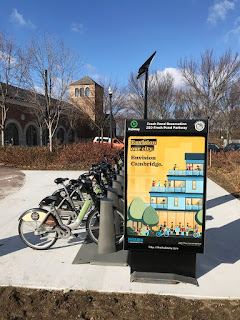 We walked around a pond every day this Thanksgiving weekend, either Fresh Pond or Walden Pond.
Posted by George Putnam at Monday, November 27, 2017 1 comment: