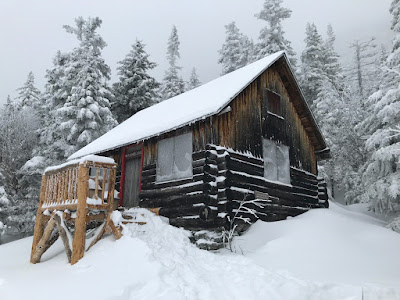 The ridgeline of Mount Mansfield extends two miles from the Chin in the north (Vermont's highest point at 4395') to the Forehead in the south (3940'). Butler Lodge is nestled in the woods south of and below the Forehead at 3030'. On a clear day, part of the ridgeline would be visible above and beyond the lodge in the photo above, but today was not a clear day.

Nancy and I snowshoed today from Stevensville to Butler Lodge via the Butler Lodge Trail on the Underhill side of Mount Mansfield. As we were leaving the parking lot, we met a party of seven or so snowshoers coming out, but otherwise we saw no one on the trail. There had been a fresh snowfall overnight of about 6", and we estimated 1.5-2.5' of snow in the woods depending on elevation. Fortunately the trail was well packed: 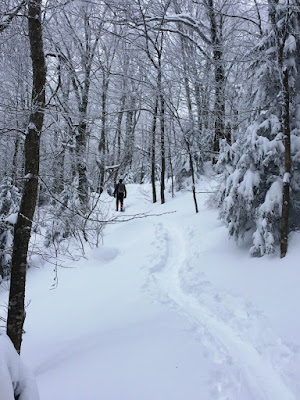 But these are not the only trails in Vermont's woods, especially in winter. The Catamount Trail is a ski trail that, like the Long Trail, runs the length of Vermont. We did not encounter the Catamount Trail on today's snowshoe hike, because it is on the other side of Mount Mansfield (the Stowe side). But about halfway to Butler Lodge, we crossed a backcountry ski trail blazed with red plastic markers: 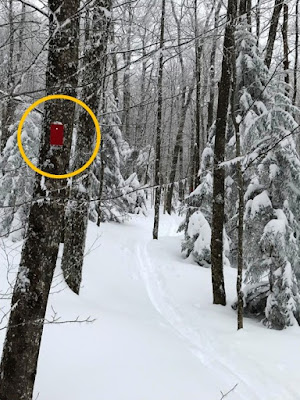 That red marker looked a lot like some of the markers we saw last month on the Madonna Vasa Trail! Indeed, the map at the Stevensville trailhead revealed an extensive network of backcountry ski trails. (But not the Madonna Vasa Trail.) On the map, the ski trail we crossed was labeled "W.B. Trail" north of the Butler Lodge Trail and "Underhill/WB" to the south.

I learned a lot from the map at the Stevensville trailhead that I didn't know before. In addition to those backcountry ski trails, I learned about the website www.trailfinder.info about trails in Vermont and New Hampshire. The main organization behind the website is the Upper Valley Trails Alliance headquartered in Norwich, Vermont, which I had not heard of before. There's a lot going on in the backcountry of Vermont!