How does the current COVID-19 pandemic compare to past pandemics? Let's take a look.

The Black Death was the worst pandemic in recorded history, resulting in 75-200 million deaths worldwide. Europe was particularly hard hit, losing 30-60% of its population. The pandemic peaked in Europe from 1347 to 1351. (Wikipedia) For this post I am using 100 million deaths and a world population of 400 million, for a death rate of 25%.

The disease of the Black Death pandemic was the plague. It is caused by a bacterium carried by fleas living on rats. Transmission is mainly by flea bites or handling infected animals, and secondarily through the air from the coughing of infected individuals.

The pandemic occurred in waves. The first wave was in early 1918 and was relatively mild. The second, deadly, wave occurred in the fall of 1918 as World War I was ending. Lesser outbreaks continued into 1920.

The photo above shows patients in an emergency hospital at Camp Funston, part of Fort Riley, Kansas, in the midst of the 1918 influenza pandemic. The photo is part of the Otis Historical Archives at the National Museum of Health and Medicine.

The influenza pandemic of 1918 is sometimes called the Spanish flu, but this is a misnomer as explained here.

The current pandemic is caused by a coronavirus, which is a different group of viruses from influenza viruses. Like the flu, however, COVID-19 is spread primarily through the air.

Here is a comparison of the worldwide deaths (click on any image to enlarge): 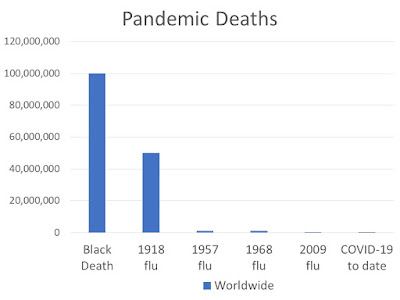 The pandemics of the last 65 years look insignificant compared to the Black Death and the 1918 flu pandemic. The disparity is even greater when considered as a percentage of world population, as shown in the following table:

[World population numbers from here (historical) and here (current). I did some rounding.]

Now let's look at just the pandemics of the last 65 years (i.e., excluding the Black Death and the 1918 flu pandemic) and include the U.S. numbers. The following graph shows total deaths, not as a percentage of population: 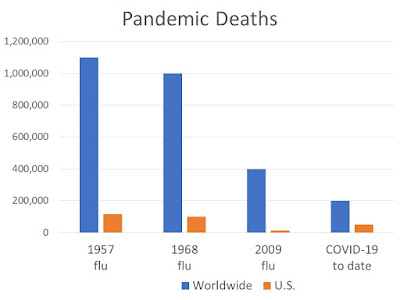 As we think about the future we should keep in mind that, like the influenza pandemic of 1918, there may be more than one wave of the current COVID-19 pandemic.

Posted by George Putnam at Saturday, April 25, 2020 No comments:

We are in a war

When I am stressed, I sometimes remind myself that at least I'm not in a war, that no one is shooting real bullets at me. I've never been in a real shooting war, but we are all in a war now. A war against a novel (new) coronavirus known as SARS-CoV-2. This is the enemy:

In unprecedented times such as these, we reach for analogies to help us understand the new reality around us. In this post I recommend two videos that offer analogies that I find helpful.

In the first video, the speaker says "this is a Dunkirk moment for our country." That's an analogy I can understand. While I have not watched the 2017 movie Dunkirk, I know the basic story of this pivotal moment in World War II.

This video is an interview with Anthony Monaco, the president of Tufts University. Dr. Monaco, a geneticist, describes the transformation of parts of the Tufts University campus into a military-style hospital to fight the war against coronavirus. The Dunkirk analogy is in the answer to the question asked by the interviewer at 9:40.

[Local readers may be interested in how I learned about this video. I reached out to Jessica Daniels to see how she was doing during this pandemic. Jessica lives in Cambridge, Massachusetts, and she is engaged in a quest to visit and blog about other Cambridges in the United States. She visited Cambridge, Vermont, last September. Click here for what she wrote about our town. It's interesting and insightful. Anyway, Jessica works at Tufts University and she told me about the video.]

The second video I recommend is about safely buying groceries and take-out food.

This video is by Dr. Jeffrey VanWingen, an MD in Michigan. I've linked to this video before, but it's worth highlighting again. As I write this, it has been watched nearly 25 million times.

Dr. VanWingen offers another useful analogy: glitter. Think of the virus as glitter, except that it is invisible. It sticks to everything and it may be anywhere. Your job is to keep it out of your house, off your person, and especially out of your respiratory system.

Other differences between real glitter and the coronavirus:
The last item is a problem, because infected people exhale the virus. (link) Person-to-person transmission through the air is thought to be the most common way the disease spreads. This is a BIG problem because an infected person may not show any symptoms. They may not know they are infected. That is why social distancing and six feet of separation are important.

Wear a cloth face mask in public. (Not an N95 mask. Those are scarce and need to be reserved for professionals.) A cloth face mask provides a small amount of protection for the wearer. More importantly it protects the people around us in case we are an asymptomatic carrier. (The State of Vermont recommends cloth face masks) (Making cloth face masks in Vermont)

It is hard to fight a war against something we can't see, but perhaps the analogies of Dunkirk and glitter will help us understand the new reality facing us.

As I write this, there have been more than 60,000 deaths worldwide (source); more than 5,000 deaths in the U.S. (source); and 17 deaths in Vermont (source). See this earlier post for comparable statistics as of March 26. Sadly the first COVID-19 death of a Cambridge resident has occurred (source).

Posted by George Putnam at Saturday, April 04, 2020 No comments: