Well over half of all college students are women. Why are fewer men than women attending college?

Inside Higher Ed recently had an article on this issue: Lost Men on Campus.

I don't normally read Inside Higher Ed, but one of the bloggers I sometimes read (Instapundit—a law professor at the University of Tennessee) wrote about this article: "the mentality revealed in this story is the problem." He also quoted a reader's favorable mention of the Boy Scouts. Read the whole blog post. He also wrote in 2005 on this subject: Where the Boys Aren't.

Instapundit's answer to the question in the first paragraph is: "because the environment has become hostile."

UPDATE 6/14/09: For an example of what Instapundit means by a hostile environment, see this post where a university professor blames men for, of all things, cheerfulness.
Posted by George Putnam at Tuesday, May 26, 2009 No comments:

All five of us climbed Belvidere Mountain on May 24, the Sunday of Memorial Day Weekend. On top of the fire tower at the summit: 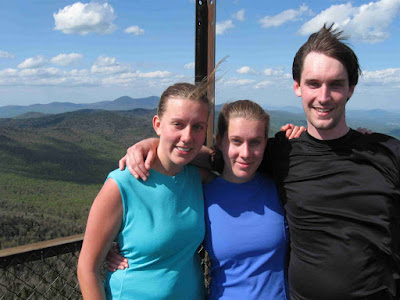 And reflected in my sunglasses: 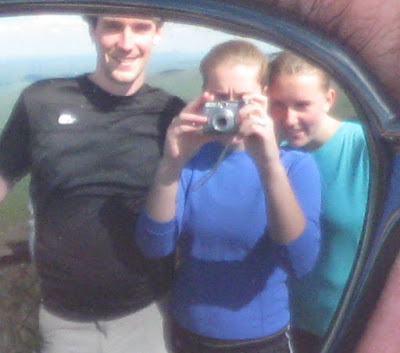 Nancy didn't climb the tower. She is on the rocks below. Note the shadow of the tower with the rest of us on top: 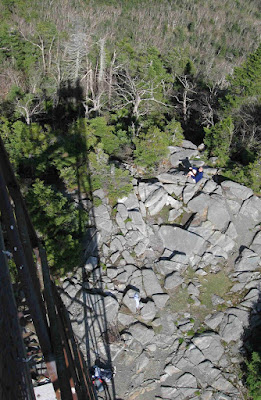 Looking out over the old asbestos mine: 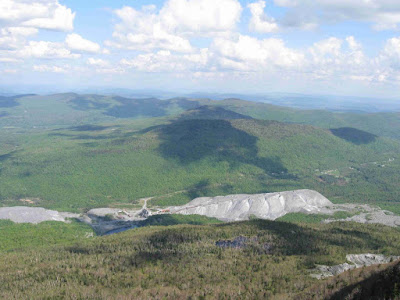 Laura took flower pictures on the way down: 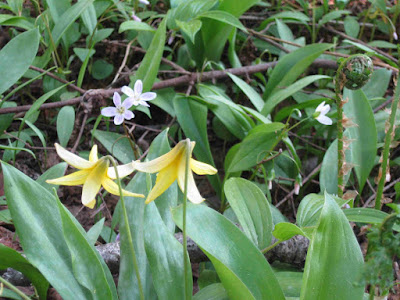 In addition to spring beauties and dogtooth violets (above) we saw red trillium, white violets, purple violets and crabapple blossoms.
Posted by George Putnam at Monday, May 25, 2009 No comments:

Wolfram|Alpha went live this weekend...check it out!

To get an idea of what Wolfram|Alpha can do, click the link for "Watch Overview Video."

Below is an example output. I entered "gdp vs. arable land". Wolfram|Alpha generated this scatter plot of all the countries in the world. If you hover over any dot (on Wolfram|Alpha not here) it will display the name of the country. Pretty cool! 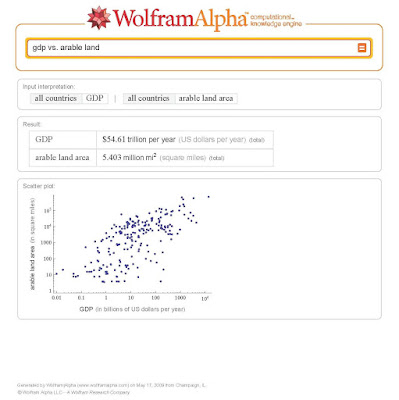 I saw the play Brighton Beach Memoirs at the Hyde Park Opera House on Friday, May 8th. Bob Giroux and Lesley Ryan had invited us. Nancy was in Maine and could not go. But I did. Many other people we know were also at this opening night performance, including the Tobins and the Duchaceks. The play was interesting and the acting was terrific. I had a wonderful time.

Brighton Beach Memoirs is a semi-autobiographical play by Neil Simon about growing up in a Jewish family in Brooklyn in 1937, as war loomed in Europe. The protagonist is a young teen-age boy, Eugene Jerome, who is just becoming interested in girls. (Neil Simon was 10 years old in 1937, so the timing is off slightly to be a true autobiography.) Brighton Beach is a neighborhood in Brooklyn, and Eugene was a beginning writer who was observing and writing about his family, hence the "memoirs" in the title of the play.

The best parts of the play were the many hilarious lines about Eugene's new interest in girls. This is not a play for children. The themes are definitely adult.

In addition to the coming-of-age theme, the play is also about the problems this extended family faced. Part of the family had lost its breadwinner, resulting in extra relatives moving into the Jerome house. The house was crowded. The extended family members did not always get along. Jobs were hard to come by, and there was a perpetual lack of money. This was, after all, during the Great Depression. And more extended family members were expected (at the end of the play) as refugees from Europe, where Jews were fleeing persecution from the Nazis.

How did this family cope with its problems? With laughter and tears. With imagination, determination and hard work. With bickering and arguing. But what struck me was that it was the family that coped with the problems. There was no mention of the government coming to the rescue. The play took place almost five years after Franklin D. Roosevelt was elected president in November 1932, but there was no mention of the New Deal. The only mentions of government were the police (who brought Eugene's father home after he had a heart attack on the subway) and the military (preparing for war). These are traditional functions of government. It is startling to realize how much our society has changed in terms of what we expect from the institutions of family and government.

This play made me think of Richard Feynman, who also grew up in a Jewish family in New York City (Queens) at about this time. Feynman was 19 in 1937, about the same age as Eugene's older brother.
Posted by George Putnam at Sunday, May 10, 2009 1 comment:

The American Form of Government

What form of government do we have in the U.S.? We often say we have a democracy, but a better answer is that we have a republic.

This video provides a good overview of different forms of government, including the difference between a democracy and a republic. It's a good video and I recommend it. It is about 10 minutes long.

Note: Scoutmaster Roger Allen brought this video to my attention, as he knew that it pertained to the Citizenship in the World merit badge that I have been a counselor for. Some time ago I created a web site for this merit badge. The requirements have changed since then, and I need to update that web site. But in the old requirements, requirement 7 was about different types of governments.
Posted by George Putnam at Sunday, May 03, 2009 No comments:

UPDATE 5/02/09: The Quest for Computable Knowledge - A Short Timeline is an interesting document found on the Wolfram|Alpha Blog. It lists many interesting milestones in the development and organization of the human body of knowledge.