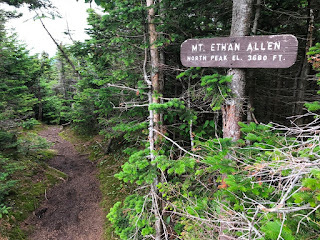 The portion of Vermont's 270-mile Long Trail that lies between the Winooski River and Lincoln Gap (about 30 miles) is known as the Monroe Skyline in honor of Will Monroe (1863-1939), a professor of botany at the University of Vermont who led the effort to build this section of the trail.

Nancy and I hiked the central part of the Monroe Skyline today, from the south side of Camel's Hump south to Appalachian Gap. Including our approach on the Forest City Trail, it was about 12 miles on the trail. The highest point on our hike, a mile south of Montclair Glen Lodge, was Mt. Ethan Allen. See photo above.

We had a nice day for hiking. It started out mostly cloudy and ended mostly sunny. Temps in the low 60s to low 70s. No rain, and not too humid or buggy.

Parts of this section of the Long Trail are rugged, even requiring hardware in one spot north of Burnt Rock Mountain called Ladder Ravine: 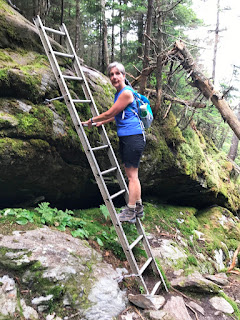 We met a fair number of through-hikers and backpackers headed north, from solo hikers to two separate groups from the Farm and Wilderness camps in Plymouth, Vermont. We met no one headed south; no one passed us and we passed no one all day. There were numerous day-hikers on Burnt Rock Mountain who came up the Hedgehog Brook Trail.

On the Long Trail north of Appalachian Gap is a lookout called Molly Stark's Balcony. Below is the view looking northwest. This was near the end of our hike. The tallest mountain in the distance, to the right, is Camel's Hump. We had started our day just this side of Camel's Hump. 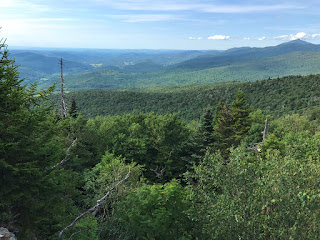 Why is there a place in Vermont named for Molly Stark? Wasn't she from New Hampshire? Yes, but her husband, General John Stark, spent time in Vermont fighting the British with assistance from Vermont's Green Mountain Boys. On the morning of the Battle of Bennington (Vermont) on August 16, 1777, General Stark is reported to have said to his men (source):

There are your enemies, the Red Coats and the Tories. They are ours, or this night Molly Stark sleeps a widow!


General Stark and his men won that day, and that victory helped set the stage for the surrender of British General John Burgoyne on October 17, 1777 at Saratoga, New York, a turning point in the American Revolution.

My Fitbit registered 40,391 steps for the day, while Nancy's registered 30,172. She used hiking poles and I did not, which seemed to affect how the Fitbits counted.

UPDATE 8/16/17: Today is Bennington Battle Day, a state holiday in Vermont. Click here for a recent discussion of the significance of the Battle of Bennington on August 16, 1777.
Posted by George Putnam at Sunday, July 23, 2017 No comments: