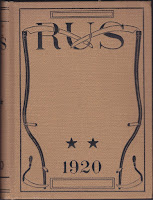 Liberty Hyde Bailey was an influential horticulturist in the late 1800s and early 1900s. He founded Cornell University's College of Agriculture and was its first dean. In 1908 President Teddy Roosevelt selected Prof. Bailey to chair a National Commission on Country Life. The report published by this commission influenced the founding of the Cooperative Extension Service in 1914, the evolution of 4-H, and the creation of the Farm Credit System in 1916.

Much of Prof. Bailey's work built on the foundation of the land grant university system—see my earlier post about Justin Smith Morrill. Cornell University is New York's land grant university. It has both a Morrill Hall and a Bailey Hall. Cornell further honors Prof. Bailey with the Liberty Hyde Bailey Leadership Society. Several northeast Farm Credit employees are members of this society, and many employees are Cornell graduates. Other employees, like me, graduated from New England land grant universities, but the influence of Cornell University on Farm Credit is strong and it began with Liberty Hyde Bailey.

I recently encountered Liberty Hyde Bailey in another context, outside of Farm Credit. A few days ago Nancy found a box in our attic that I had forgotten about. It was a box of papers that my mother had given to me about her father. One of the things in the box was a book by Prof. L. H. Bailey titled RUS. The title stands for Rural Uplook Service ("rus" is also Latin for "the country"). The goal of RUS was to "compile compact information about those persons who are now contributing through their achievements to the betterment and advancement of country life." It was basically a "who's who" of rural United States and Canada.

(For notes about Luther Putnam's farm see my earlier post on Westview Farm.)

Another item in the box was a church newsletter written by Rev. Walter H. Gould and featuring a photo of Luther Putnam—"one of our oldest members." Here is the first page of the 12-page newsletter: 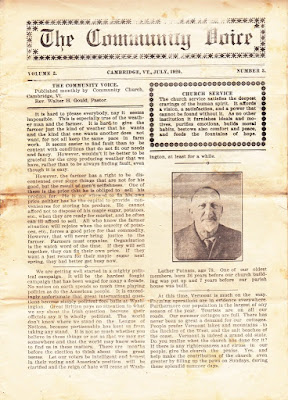 (Click on the image to enlarge.) The newsletter is also dated 1920.

The young minister (age 35) and the old farmer (age 78) clearly knew each other in 1920, the year they both appeared in RUS. The farmer lived his entire life in the adjoining towns of Cambridge and Westford. The minister had only been in Cambridge for three years and would leave within a year for other towns in Vermont. But it was enough time to establish a connection between the two families. The minister's oldest daughter, then four years old, would return in later years, after graduating from UVM, and marry one of the old farmer's grandsons. The old farmer would not live to see that, but the minister would return to Cambridge, where the newlyweds would live on the family farm, to perform the wedding ceremony.
Posted by George Putnam at Sunday, August 29, 2010 No comments:

U.S. patent #1, issued in 1790 and signed by George Washington, was granted to Samuel Hopkins for an improved method of making potash. Potash, consisting mainly of potassium carbonate, was then made from hardwood logs and was widely used in manufacturing many products including soap, glass, dyes and gunpowder. Potash was "America's first industrial chemical" and it was probably the first major agricultural product in America that was sold for money.

Until recently it was thought that Patent #1 was granted to a Samuel Hopkins from Pittsford, Vermont. In 1998 it was discovered that the real Samuel Hopkins of Patent #1 fame was from Philadelphia.

Many people still think that the Samuel Hopkins who lived in Pittsford, Vermont earned the first patent. Below is a historical marker to this effect on US-7 in Pittsford (photo taken 7/3/10): 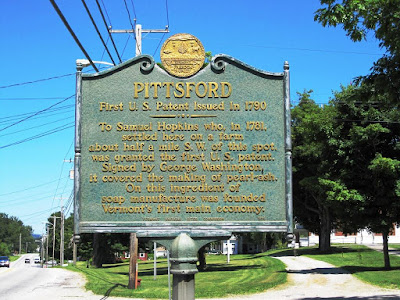 The sign mentions pearl-ash, which was a form of potash.

How did such a case of mistaken identity occur? In 1836 a fire destroyed the U.S. Patent and Trademark office. All records pertaining to the first 10,280 patents were lost. I don't know the full history of how this case of mistaken identity occurred, but the correct Samuel Hopkins was apparently discovered by someone named David Maxey. He published articles in the Jan/Apr 1998 issue of the Pennsylvania Magazine of History & Biography and the March 1998 issue of the Journal of the Patent & Trademark Office Society.

In 2002 the State of Pennsylvania erected their own historical marker to Samuel Hopkins in Philadelphia (source and more info): 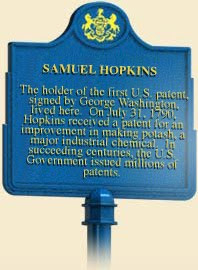 At the time of the first patent the seat of the U.S. government was in Philadelphia, and Vermont was still an independent republic—not even part of the United States yet. (The new U.S. government began operations in 1789, initially in New York. In the summer of 1790 it moved to Philadelphia for ten years while new government buildings were constructed in Washington, DC. Vermont was an independent republic for 14 years beginning in 1777, becoming the 14th state in 1791.) Taking those historical facts into account, it seems altogether reasonable that the recipient of the first U.S. patent was from Philadelphia not Vermont.

I cannot find Mr. Maxey's articles online, but an excellent online article is The First Patent, by Henry M. Paynter. Dr. Paynter was an emeritus professor of mechanical engineering at MIT who retired to Pittsford, Vermont in 1985 and died at his home there in 2002. (obituary) In his retirement, Dr. Paynter became interested in the history of the first patent. This article also describes the importance of the potash industry to colonial America and the young United States. The quote above about potash being "America's first industrial chemical" came from this article.

There are photos of the potash kettles in Pager's lilac garden and in Beth's garden in this 5/11/08 post on my work blog: The Forgotten Potash Economy.
Posted by George Putnam at Saturday, August 28, 2010 No comments: