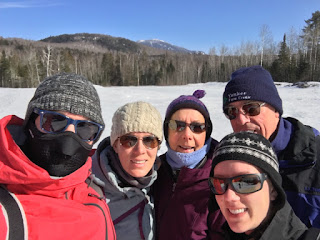 Today we hiked to Stratton Brook Hut in western Maine near Sugarloaf Mountain. It was a beautiful sunny day, if cold (about 10 F) and windy. The photo above is near the beginning of the hike and shows the Bigelow Range in the background. The photo below is the hut: 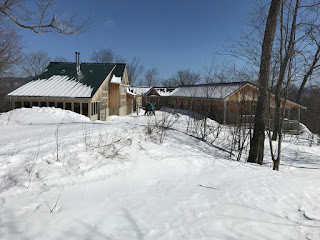 Stratton Brook Hut is one of four huts constructed in western Maine in 2008-2012 by Maine Huts and Trails. There may be more huts in the future according to Wikipedia. These are very nice huts, as shown in the photo below. Stratton Brook Hut can sleep 44 people in 10 bunkrooms. We bought lunch at the hut and it was delicious. 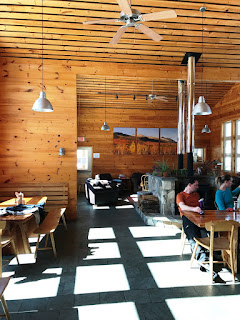 Below is the Bigelow Range from a lookout near the hut: 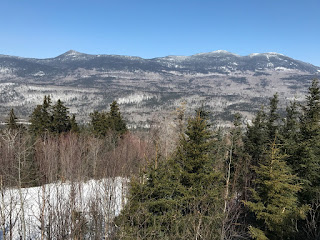 The trailhead for our hike was on ME-27 just north of Sugarloaf Mountain Resort. It was a three mile hike in to the hut on a groomed trail – see photo below: 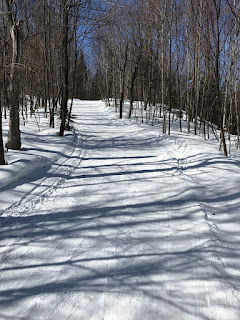 We saw cross-country skiers, snowshoers (but snowshoes weren't necessary), and fat tire bicycle riders. Motorized vehicles are not allowed except for a snowmobile for the hut crew. Western Maine received heavy snowfalls in February. There had since been warm weather which consolidated that snow, but there was still a lot of snow left – about 1.5 feet of very solid snow in the woods.

When friends and I were winter peakbagging in 1984-1992 there were no trails or huts like these in the woods! We climbed the two Bigelow peaks (Avery Peak and West Peak) on March 7, 1985 on our way home from a multi-day trip to Baxter State Park where we had climbed North Brother.