A Previous Trip to Washington 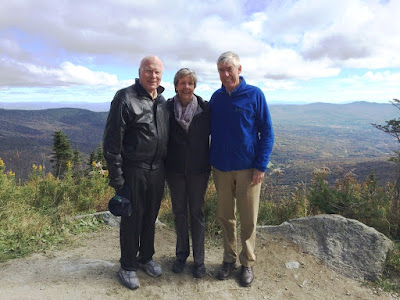 Our recent vacation in Washington, DC caused me to reminisce about a previous trip to Washington some eight years ago, especially in light of current events.

I worked for most of my career for the Farm Credit System, a creation of Congress. When I was CEO of Yankee Farm Credit, I went to Washington typically once a year with two members of the board of directors to visit with Members of Congress (or their staffers) from our territory – Vermont and parts of New Hampshire and New York.

We seldom did much sightseeing on these trips, but in 2011 we arrived in Washington early on the afternoon of July 27th with nothing scheduled until our Congressional visits the following day. We went to the Capitol Visitor Center (new in 2008). It was not busy, and we inquired at the information desk if either the House of Representatives or the Senate was in session that afternoon. Yes, they both were. We inquired if we could obtain tickets. Yes, which chamber did we want? We chose the Senate.

(The person at the information desk said: "You are supposed to obtain tickets from your representative or senator, but I just happen to have a few extras here.")

The Senate was mostly empty when we sat down in the gallery, but there was a senator speaking. Who was it? Senator Patrick Leahy of Vermont, whom we had an appointment to see the next day.

Senator Leahy was speaking in favor of a nomination that President Barack Obama had forwarded to the Senate. When he finished, the Senate proceeded to a roll call vote.

That was interesting. The Senate Chamber gradually filled as senators wandered in for the vote. It took a while, perhaps 20 minutes, as the presiding officer went through the list of senators again and again until all 100 senators had arrived and voted. No one sat down. The senators milled around visiting with each other, the men in black suits, the women in colored suits or dresses. It looked very congenial.

It was not a controversial nomination. The vote was 100 to 0.

When we met with Senator Leahy in his office the next day, we told him that we had seen him in action on the Senate floor the previous afternoon. He seemed pleased.

The Congressional Record for the Senate on July 27, 2011 details what we witnessed (PDF, 12 pages). The nomination of Mr. Mueller begins on page 1. Senator Leahy's closing remarks that we heard start on page 11 and the roll call vote is on page 12.

Mr. Mueller is scheduled to testify before two committees of the House of Representatives later this month about his investigation into Russian interference in the 2016 election and possible obstruction of justice by President Donald Trump. News reports here (NYT) and here (WSJ).

The photo at the top of this post is Senator Leahy with Nancy and me on Mount Mansfield near the top of the gondola on October 3, 2015. Background here.

My Parents in Washington My mother went to Washington with her father who was working on his Ph.D. at American University. He was a professor at Norwich University and the family was living in Northfield, Vermont. She wrote in the family history:

During the summer after my Junior year of high school he succeeded in receiving an assignment of an office in the Library of Congress for research on his doctoral thesis. He had been blind in one eye most of his life, and reading tired him, so he took me to Washington, D.C. for six weeks.


She worked mornings in the dining hall on the campus of American University to earn her room and board, and in the afternoons she read to her father at the Library of Congress.

More from the family history:

The thesis was about the German theologian Schleiermacher, one perhaps lesser known. The reading was dry at times, except that he fell deeply in love and wrote some beautiful love letters which appealed to a sixteen year old!

In 1932 the Library of Congress, now three buildings on Capitol Hill, consisted of just one building, what is now called the Thomas Jefferson Building. The Jefferson Memorial, Supreme Court, National Gallery of Art, and many of the Smithsonian museums were not yet built.

In an amusing coincidence, the Librarian of Congress at the time was Herbert Putnam, full name George Herbert Putnam. My mother would marry into a distant branch of the Putnam family.

My father visited Washington a year later. He was active in 4-H as a youth, and in 1933 he was one of four 4-H club members who were


named delegates to represent Vermont at the National 4-H Camp to be held on the mall in front of the United States Department of Agriculture buildings, Washington, D.C., June 15 to 21.


(Source: newspaper clipping. Interestingly, the clipping says my father was from Cloverdale, which was only a neighborhood and not a town – see this. He lived in the town of Cambridge.)

Those were the years of the Great Depression. When my mother visited Washington in the summer of 1932, Herbert Hoover was president, but he lost his bid for re-election to a second term that fall. By June 1933 when my father visited, Franklin Roosevelt was president and he was just finishing up his famous First 100 Days in which more than a dozen major laws were passed by Congress. What a time to be camping on the National Mall in Washington!

In an interesting twist of history, the Farm Credit Act of 1933 was enacted on June 16 while my father was in Washington. This law significantly expanded the mission and structure of the Farm Credit System, where I worked for most of my career.

My father just missed being in Washington at the same time as his future in-laws. My mother's parents were in Washington for my grandfather's graduation from American University on June 5, 1933.