In retirement my goal is to spend time traveling in both the physical world and the world of ideas, looking for adventures to blog about. This blog will continue, and here I will blog about my travel adventures in the physical world, such as the recent road trip to Florida that Nancy and I did. "The Switchel Philosopher" will be for adventures in the world of ideas, starting with thoughts about government and citizenship. 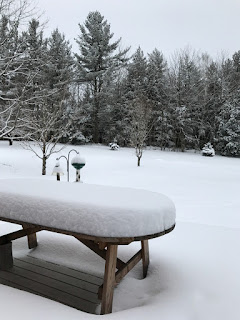 We are home again after our 3+ week road trip to Florida. It was a great trip, but it's good to be home. We arrived yesterday afternoon to about 5" of snow on the ground. We got another 3" or so overnight. The photo is from our back door this morning.

Posted by George Putnam at Tuesday, February 07, 2017 No comments: 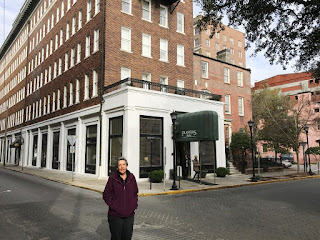 On our way home from Florida, we stayed last night at the Planters Inn (photo above). This site in Savannah, Georgia, has a rich history.

Savannah, the oldest city in Georgia, was founded in 1733 by James Oglethorpe. Savannah is known as America's first planned city, having been built around "squares" (see Oglethorpe Plan). The Planters Inn is on Reynolds Square, named for John Reynolds, colonial governor of Georgia from 1754 to 1757. The statue in Reynolds Square, however, is not of Mr. Reynolds, but of John Wesley.

John Wesley arrived in Savannah in February 1736 at the request of James Oglethorpe to head the new parish there (Church of England, of course). Mr. Wesley stayed less than two years in Savannah. He returned to England in December 1737 following a failed love affair. The reason that there is a statue of John Wesley in Reynolds Square is that back in England he founded Methodism (i.e., the Methodist church). See the Wikipedia entry for John Wesley for more info. It's an interesting story, but it is not the story of the Planters Inn.

It is thought that John Wesley's church and parsonage in Savannah were approximately where the Planters Inn is now. The original buildings were lost in a disastrous fire in 1796 that destroyed much of the city. In the early 1800s two mirror-image homes were constructed on the site, belonging to business partners Oliver Sturges and Benjamin Burroughs. The Sturges House remains today. It was purchased by the Morris Newspaper Corporation in 1971, renovated, and made into their headquarters. The Burroughs house deteriorated and was eventually demolished. The John Wesley Hotel was built in its place, and became the Planters Inn in 1984.

The photo above shows the Sturges House to the right of and adjacent to the (much larger) Planters Inn.

Howard Duchacek and Sue Wisehart told us about the Planters Inn and recommended it to us. It was a good choice!

Posted by George Putnam at Saturday, February 04, 2017 No comments: 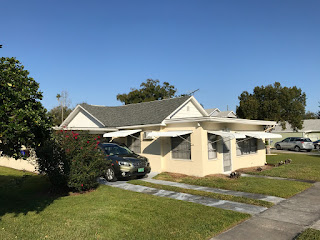 Nancy's grandparents' home at 422 Ohio Street in St. Cloud, Florida, will go on the market later this month (photo above). Note the Vermont car in the driveway. It even has winter tires on!

The other sides of the house: 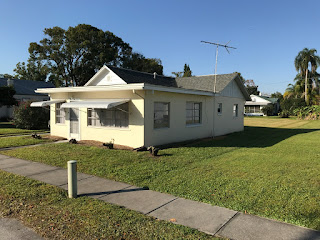 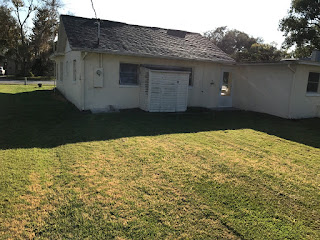 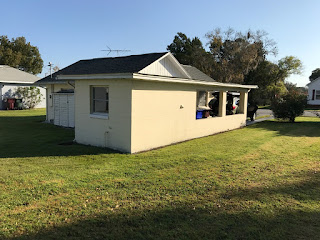 And one last view of the carport without the car: 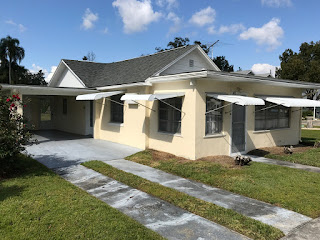 We left Florida today.
Posted by George Putnam at Friday, February 03, 2017 No comments: 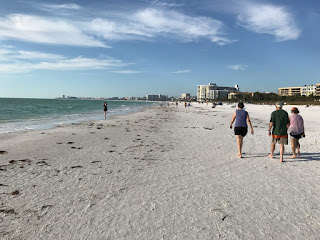 Today we visited our friends Howard Duchacek and Sue Wisehart in Siesta Key on the Gulf Coast of Florida, just south of Sarasota. We took long, delightful walks on the beach (photo above) where one of the interesting sights was a sailboat that had run aground: 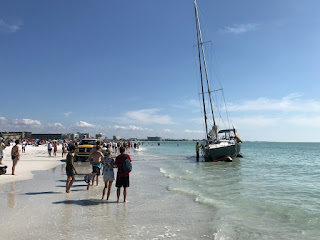 The beach on Siesta Key is said to have the "whitest and finest sand in the world." It was very pleasant to walk on. We saw people parasailing and flying lightweight seaplanes. Howard and I enjoyed swimming in the ocean, but Nancy and Sue declined the opportunity.

Siesta Key has beautiful sunsets. Howard says they often see the green flash. No green flash today, but there was a lovely sunset: 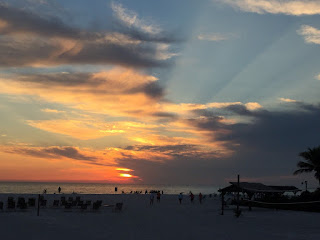 Posted by George Putnam at Thursday, February 02, 2017 No comments: