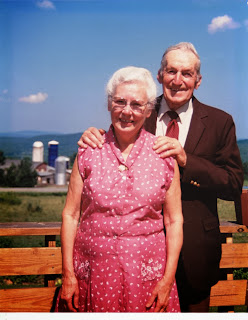 We lost my father a few days ago. The memorial service was yesterday.

My comments at the memorial service yesterday included an explanation of the origin of the name "Pager" (rhymes with logger), the story of how my parents met, and the story of "Put's Palace." Rebecca's comments started out with a story about the famous breakfasts with grandchildren.

The photo above was taken in 1990 at Put's Palace. I wasn't blogging in 1999 when my mother died, but earlier this morning I put up a blog post about her:

Following are some of my favorite posts on the blog about Pager, newest on top: The photo above was taken at Christmas 1978.
Posted by George Putnam at Sunday, December 29, 2013 No comments: 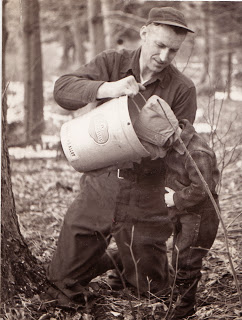 Above is the photo of Pager and Beth that I talked about. For more information about Boots, including photos, see this earlier blog post:

A Man and His Horse 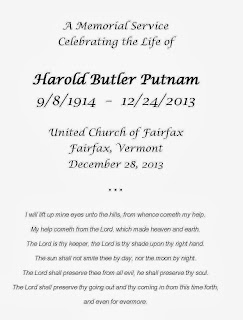 Click here for the full program from Pager's Memorial Service

Rev. Elizabeth Griffin is the retired minister of the United Church of Fairfax.

Rev. Robert Boutwell is also a retired minister. Florence Boutwell is Rev. Boutwell's wife. Her harp was made by their son, Bruce Boutwell. The Boutwells and the Putnams have been good friends since Rev. Boutwell was the minister in Cambridge and Jeffersonville in the 1960s.

Lorraine Wood is from Fairfax.

All of the above also did Grandma's memorial service at the United Church of Fairfax on July 26, 1999. 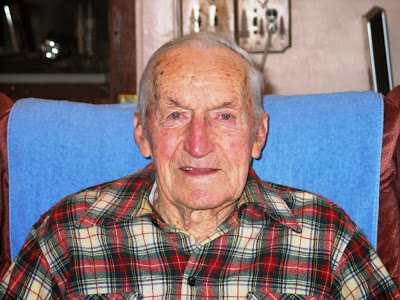 Harold Butler Putnam, 99, of Cambridge, Vermont, passed away on Tuesday, December 24, 2013 with family by his side. He was born on September 8, 1914 in the farmhouse at the Putnam Family Farm in Cambridge. His parents were the late J. Kinsley Putnam and Mabelle (Butler) Putnam.

Traveling by horse and buggy, Harold attended and graduated from Cambridge High School in Jeffersonville as the class Valedictorian in 1931. He attended the Vermont School of Agriculture, now Vermont Technical College, graduating in 1932. Following graduation he had a job with the Agricultural Conservation Program for a few years. Many years the farm hosted sugar-on-snow parties for the ACP staff.

On June 16, 1946 Harold married Lois Gould and together they ran the farm and raised four children. They were married for 53 years.

Harold was a lifelong dairy farmer, the 4th generation of Putnams on his dairy farm. He was innovative for his time, embracing change and adopting new technology. Electricity came to the farm in 1941. Harold was instrumental in getting it to this area by helping to secure right-of-ways from multiple landowners. Before baled hay he installed in his barn a hay dryer for drying hay faster. He later built a milking parlor and converted his tie stall barn to loose housing, both very uncommon at that time. Many years later he built a new modern design barn with a larger milking parlor and continued the loose housing concept for the cows.

Before the era of home freezers, he was a founding member and eventually President of Cambridge Cooperative Lockers, Inc., a village store that housed freezer space for food locker rental to community members. He was a trustee of the Cambridge Cemetery Association at the Mountain View Cemetery in Cambridge for 50 years. He was on the board of directors for Richmond Cooperative Association, Inc., a milk marketing co-op. He was active in many other farm organizations, including the Farm Bureau Co-op (a maple syrup co-op) and the United Farmers Cooperative Creamery Association. He was a deacon at the Cambridge United Church for many years. As a youth Harold was very active in the local 4-H and as an adult he was a 4-H leader for the children in the area.

Before the advent of the modern bulk tanks, milk was stored and kept cool in milk cans bathed in cool spring water. In 1950 Harold purchased a local milk route and picked up milk cans from the coolers at area farms for several years. For many years, he also drove a station wagon school bus to pick up school children from some of the back roads around Cambridge.

Maple sugaring was always a large part of Harold’s annual adventures. He witnessed many changes as he began the early years with buckets and gathering sap by horse and sled. Over the years this evolved through experimental trials using plastic tubing to collect the sap and then progressed to using vacuum to help increase sap yields. He then was able to witness the building of the 5th sugarhouse on the farm with the latest hi-tech tools for collecting sap and making syrup.

One of Harold’s hobbies was the growing and preservation of an old Vermont heritage flint corn. He grew and harvested this special variety for many years, marketing his corn meal from “Pager’s Gristmill” to local residents and area food establishments.

He was considered a local historian and often sought after by those with questions of how things used to be. He was instrumental in helping to establish the Cambridge Historical Society.

The family wishes to express their thanks to Lamoille Home Health & Hospice, Franklin County Rehab Center, and the many caregivers who helped with Harold’s care in recent years. Special thanks to Nancy Knapp, Theresa Wilcox, Patty Wells, Mary Skog, Sue McAdoo, Lorinda Smith, Betsy MaGee and the many volunteers for their caring devotion to Harold’s care. 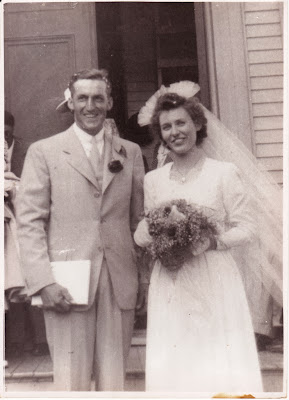 I didn't start blogging until 2007 and so there isn't much on the blog about Mother. Above is a favorite wedding photo taken on June 16, 1946 at the Cambridge Community Church.

Later today I will publish several posts about Pager which will include information about Mother, including how they met. Following are older posts on the blog related to Mother:

What is a boy?
Clayton Burnham
Rural Uplook Service (about both the Gould and Putnam families)