Brian came home for the weekend to help celebrate my birthday, and we went shooting today at the Sportsman's Club of Franklin County: 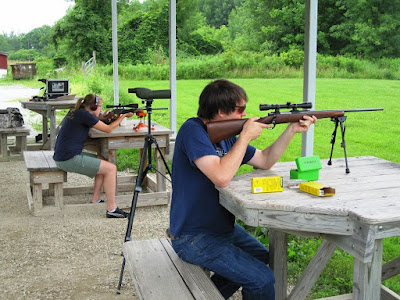 Yup, that's Emily in the background. After many years on archery ranges, I think this was her first time on a rifle range.

Nancy went, too. Here's a video of a milk jug that she shot: 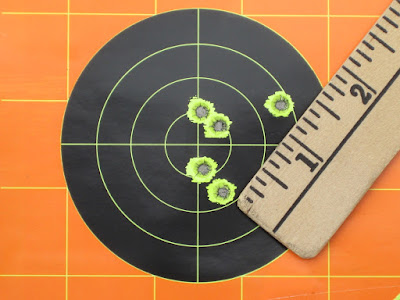 Pictures and video taken with my new camera, a birthday present. It's pretty cool!
Posted by George Putnam at Sunday, June 27, 2010 1 comment:

The G-20 Toronto Summit starts today. President Obama will argue for increased government spending (financed by debt) to stimulate the global economy, a distinctly Keynesian idea. The European countries will argue for restraint. It looks to be interesting.

The Economist recently published a special report on debt* and a related column on world debt. The column has a cool interactive graphic that shows debt for the major developed countries broken down by sector: government, household, nonfinancial business and financial business. Highly recommended reading.

*The special report has multiple parts. This link takes you to the first part. At that link, see the sidebar "In this special report" for links to the other parts.

Here's a quote that captures the main theme: "Borrowing has been the answer to all economic troubles in the past 25 years. Now debt itself has become the problem."

Like Keynes, The Economist is from England, but that seems to be about all they have in common. On our side of the pond, the Wall Street Journal also has an editorial today on this topic: The Keynesian Dead End.

Previous posts on this general topic: Fear the Boom and Bust (about Keynes and Hayek) and Greece's Financial Problems.
Posted by George Putnam at Saturday, June 26, 2010 No comments:

Herman Wouk wrote the best historical novels ever about World War II: The Winds of War and War and Remembrance. They are exciting and gripping stories, yet factual and complete. Highly recommended. These two books were also made into two minseries, available on DVD.

It turns out that while writing those books Herman Wouk had several conversations with one of my heroes: Richard Feynman. I didn't know that before, but learned it from a new nonfiction book that Herman Wouk just published: The Language God Talks: On Science and Religion. The title of the book comes from Wouk's first meeting with Feynman: "...[Feynman] said as we were parting, 'Do you know calculus?' I admitted that I didn't. 'You had better learn it,' he said. 'It's the language God talks.' "

Wouk and Feynman were contemporaries, both born in New York City—Wouk in 1915 and Feynman in 1918. Both of their families were Jewish, and from the same city in Russia. Yet they did not meet until mid-life. The Language God Talks is dedicated: "To the memory of our fathers, Abraham Isaac Wouk and Melville Feynman, who emigrated from Minsk and gave us our lives in America."

Feynman turned his back on religion at about age ten. Wouk embraced religion in his 20s. The book is a "debate" that Wouk has with his good friend Feynman about science and religion. Feynman must have made quite an impression on Herman Wouk, because Feynman has been dead for 22 years, and Wouk is still debating with him.

Feyman once said in an interview: "The stage is too big for the drama." Meaning: the universe is too big a stage for human drama to be anything special. Wouk wrote The Language God Talks to dispute this statement.

Wouk never did learn calculus (although he tried), and he quotes a Jewish microbiologist who is also a Torah scholar as describing calculus as "His [God's] other language" (my emphasis). Wouk ends the debate with the word teiku (the question stands), and these words: "...forgive me, friend Nobel genius, you're as ignorant of religion as I am of calculus."

Even though Herman Wouk may be ignorant of calculus, The Language God Talks contains a good overview of science. For religion and the "struggle for good and evil" (Feynman's words for the human drama), Mr. Wouk draws on his World War II novels with their underlying theme of the Holocaust. How could a good and gracious God allow the Germans, an advanced people, to do such evil?

Herman Wouk's answer was in War and Remembrance, in a sermon by his character Aaron Jastrow in the Theresienstadt ghetto. The title of the sermon is "Heroes of the Iliad," but Jastrow (and Wouk) find the answer not in the Iliad but in the Book of Job. The sermon is reprinted and explained in The Language God Talks.

One additional interesting connection that I learned from The Language God Talks is that another person whom Herman Wouk talked to when he was writing his World War II novels was Dr. Raul Hilberg, a professor of political science at UVM from 1955 to 1991. I had not heard of Dr. Hilberg, but according to Wikipedia, he was "widely considered to be the world's preeminent Holocaust scholar." Mr. Wouk visited Dr. Hilberg at UVM and spoke at his retirement party in 1991. Dr. Hilberg lived in Williston until his death in 2007.

You can read the first few pages of The Language God Talks here:

Is God a mathematician?
Posted by George Putnam at Sunday, June 13, 2010 No comments:

Snow Crash by Neal Stephenson is a science fiction novel about viruses. It's both deep and funny, the ironic humor starting with a main character named Hiro Protagonist.

Themes include computer viruses, biological viruses and viral ideas, all interconnected from ancient Sumerian mythology to a futuristic virtual reality called the Metaverse. Language is a key theme, beginning with the Biblical story of Babel (Genesis 11:1-9) and continuing to the modern concepts of DNA (the language of biology) and the binary language of digital computers.

The book is also full of thrilling action and unforgettable characters, such as Y.T. (Yours Truly), a 15-year old girl with a high-tech skateboard and Attitude.

Neal Stephenson is both an entertaining author and a deep thinker. Over on my work blog, I have mentioned another book by Neal Stephenson that is about a near future world where nanotechnology is ubiquitous: The Diamond Age. His magnum opus is Cryptonomicon, which I have also read, but not yet blogged about. All highly recommended.

Snow Crash was published in 1992, before the Internet and World Wide Web became widely popular. (The first popular web browser, Mosaic, was released in 1993.) Note that Neal Stephenson is apparently a friend of Jaron Lanier, whom I wrote about last month: You Are Not a Gadget (see the Update).
Posted by George Putnam at Friday, June 04, 2010 No comments: