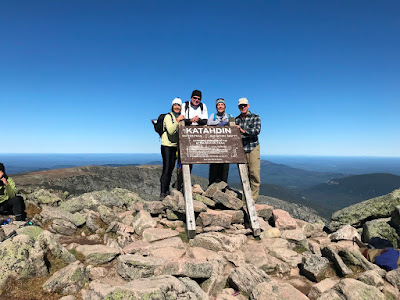 Mount Katahdin is the highest mountain in Maine and the northern terminus of the Appalachian Trail. We climbed it on Monday, September 24. What beautiful weather! It was clear with little or no wind and the temperature was in the 50s. There aren't many days like that on Mount Katahdin, which sees weather nearly as severe as Mount Washington.

The photo above shows the sign on the summit. A few feet from that sign is the cairn in the photo below: 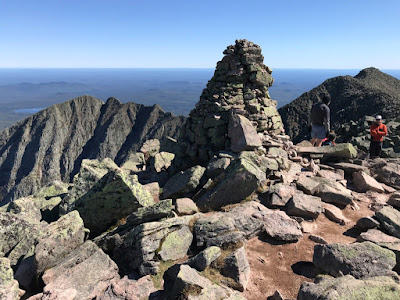 The highest point on Mount Katahdin is Baxter Peak (5267') which is where the sign and cairn are. In the photo above, the peak behind and to the right of the cairn is South Peak (5240'), 0.3 miles away. To the left of the cairn is Pamola Peak (4902'), 0.8 miles beyond South Peak. The narrow, serrated ridge to Pamola Peak is the famous Knife Edge.

We continued our hike from Baxter Peak to South Peak. The photo below was taken shortly after leaving Baxter Peak and shows South Peak at the top right (above the horizon) and Pamola Peak to the left (below the horizon). Note the sheer drop-off a few feet in front of Nancy: 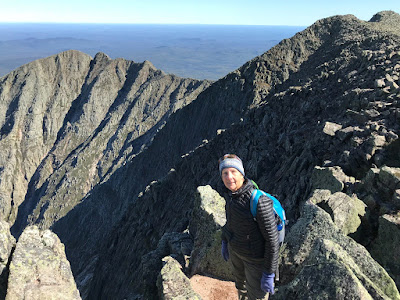 Below is Nancy on South Peak with the Knife Edge and Pamola Peak in the background: 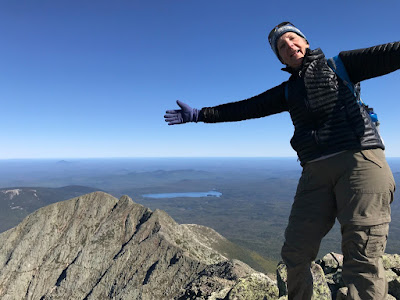 Mount Katahdin is in Baxter State Park. We drove to the park on Sunday, September 23, and parked at Roaring Brook Campground (the end of the road). From there we hiked with overnight packs 3.3 miles to Chimney Pond Campground, accessible only by trail, where we stayed two nights in a lean-to. We climbed Mount Katahdin with day packs on Monday, September 24, starting from and returning to Chimney Pond.

The photo below, taken on South Peak, shows Chimney Pond at the foot of the ridge leading up to Pamola Peak. The elevation of the pond is 2910', some 2330' below us. 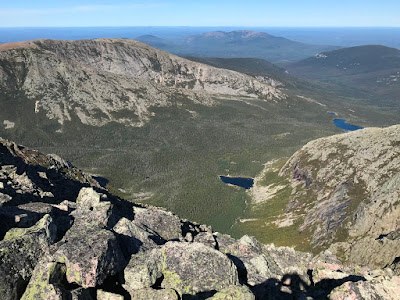 We last climbed Mount Katahdin in August 2000. On that trip, Brian and I hiked across the Knife Edge to Pamola Peak and down the Dudley Trail to Chimney Pond. But the Dudley Trail was closed because of a rock slide in the winter of 2016. Nancy and I returned from South Peak to Chimney Pond via the Saddle Trail, the same way we had come up.

Below are two photos taken from Chimney Pond on consecutive mornings, looking up at (from left to right) Pamola Peak, the Knife Edge, South Peak, and Baxter Peak. This photo was taken at 9:33 AM on Monday, September 24, the day we climbed the mountain: This photo was taken at 9:49 AM the following day, Tuesday, September 25: 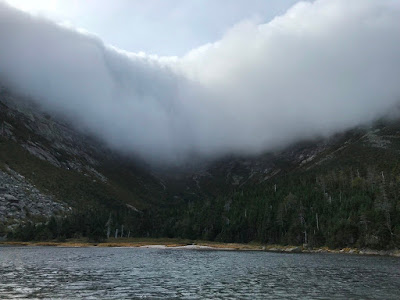 It was windy that Tuesday with 40 mph gusts at the ranger station at Chimney Pond. A storm system was moving in. We hiked out before the rain started.

Below is a closer view of the sign in the photo at the top of this post: 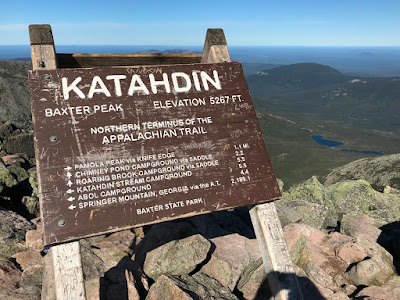 It says: "Katahdin, Baxter Peak, Elevation 5267 ft., Northern Terminus of the Appalachian Trail." There are several mileages listed, the last one is: "Springer Mountain, Georgia via the A.T. 2,189.1 mi." When we reached this sign at about 12:30 PM on September 24, there were perhaps 30 people there including several who were celebrating finishing the Appalachian Trail. What a perfect day weather-wise to celebrate that accomplishment!

Posted by George Putnam at Wednesday, September 26, 2018 No comments: 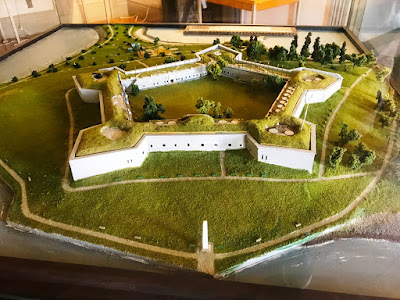 Castle Island in Boston Harbor is one of the oldest continuously fortified sites in the United States. English colonists settled in Boston in 1630 and the first fortifications were built on the island in 1634.

There have been eight forts on Castle Island, with various names. The current fort, built between 1833 and 1851, is Fort Independence. The photo above shows a scale model on display inside the fort, now part of the Massachusetts state park system.

We toured Castle Island and Fort Independence today. Below is the view of Boston from the top of the fort: 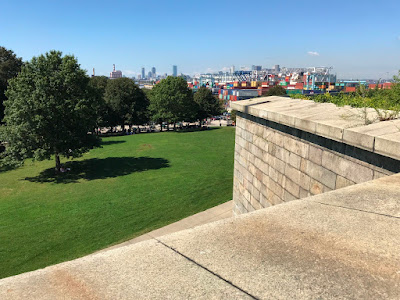 And below is the view from the other side of the fort, looking out over Boston Harbor. The largest island is Spectacle Island. 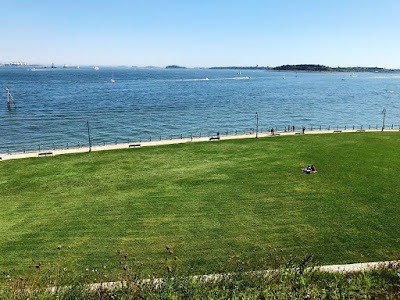 One of the interesting displays at Fort Independence is a large collection of flags. Below is the only official United States flag to have more than 13 stripes. It had 15 stars and 15 stripes, recognizing two additions to the original Thirteen Colonies: Vermont (the 14th state) and Kentucky (the 15th state). After this flag, stars continued to be added for new states but the number of stripes reverted to 13. 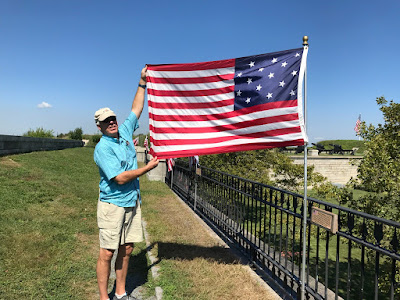 The flag with 15 stars and 15 stripes was known as the "Star-Spangled Banner." It was the flag in use at the time of the War of 1812. This is the version of the United States flag that flew over Fort McHenry in Baltimore Harbor during the British bombardment on the night of September 13-14, 1814, and inspired Francis Scott Key to write what is now our national anthem.

None of the various forts on Castle Island saw hostile action except for a minor incident early in the American Revolution when it was still in British hands. When the British evacuated Boston in March 1776, they "destroyed the island's fortifications which were repaired shortly thereafter by troops under Lt. Colonel Paul Revere."

The quotes in the two preceding paragraphs are from the brochure for Castle Island and Fort Independence published by the Castle Island Association which we picked up on our tour today.

Castle Island was an island for most of its history, but it was connected to the mainland in 1928. Much of current day Boston is built on land that was created by filling in surrounding tidal areas. Activity continues today to maintain land and water geography as desired by humans. Below is a dredging operation that was taking place next to Castle Island: Logan Airport is directly across the water from Castle Island, and it is also partially built on landfill. Below is a photo of Logan Airport from the top of the fort, with a plane coming in for a landing. Planes were taking off and landing all the time. 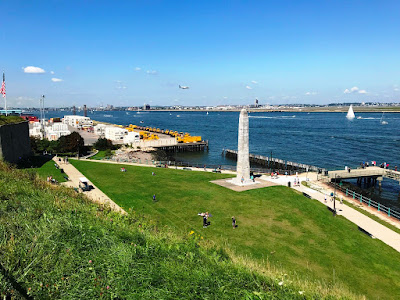 The obelisk in the photo above, also visible in the scale model at the top of this post, commemorates Donald McKay, who designed and built the fastest clipper ships in the world in the mid 1800s. The names of his ships are engraved on the monument.

Posted by George Putnam at Sunday, September 16, 2018 No comments: 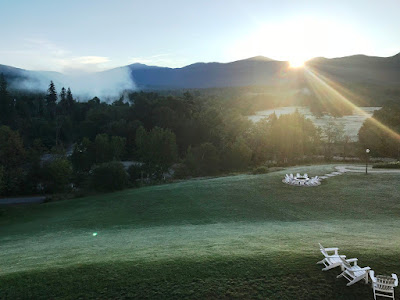 Nancy and I spent the weekend in Bretton Woods, New Hampshire. It was tough duty, but someone had to do it.

Today we hiked Mount Tom (4051') and Mount Field (4331'), starting from the Appalachian Mountain Club's Highland Center Lodge in Crawford Notch. This is a popular hike but it is mostly wooded, with limited views. Below was the view from a cleared lookout on Mount Field: 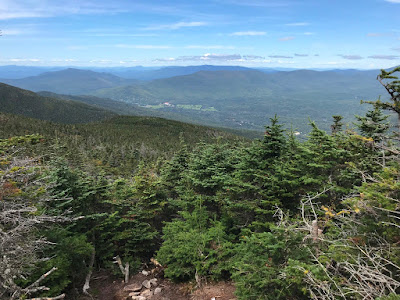 The Mount Washington Hotel was the site of the famous Bretton Woods Conference in 1944. This conference established the international monetary system that was implemented following World War II. Below is the "Gold Room" where the agreements were signed: 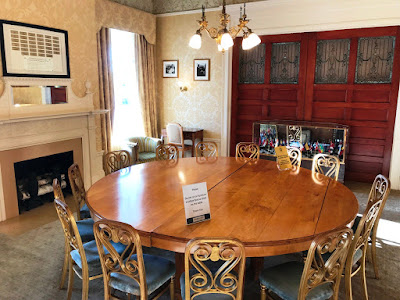 There are many recreational opportunities in the Bretton Woods area. Yesterday we did the Bretton Woods Canopy Tour, which includes nine zip lines, two sky bridges, and three rappels. Below is a 10 second video of Nancy ziplining:


The photo at the top of this post was taken at sunrise today from the back porch of the Mount Washington Hotel. The sun is rising between Mount Washington and Mount Monroe. It was cold this morning; there was a frost.

The photo below was taken five minutes after sunrise, looking back at the porch from where I had taken the sunrise photo at the top of this post: 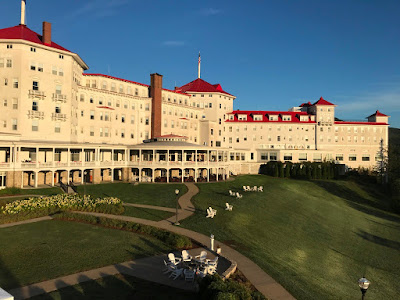 Posted by George Putnam at Sunday, September 09, 2018 No comments: