Emily presented her senior thesis today at Middlebury College: "Investigating the effects of the gcrR gene product on Streptococcus mutans biofilm architecture." Mom and I attended, along with about 40 other people. Emily did a great job! She even had her own cheering section (her lab partners) who stood up at the end with signs that spelled out E-M-I-L-Y and included this: 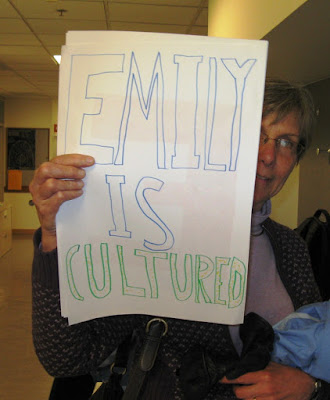 Here is a 5,000X scanning electron microscope photo of some of those Streptococcus mutans that Emily cultured: 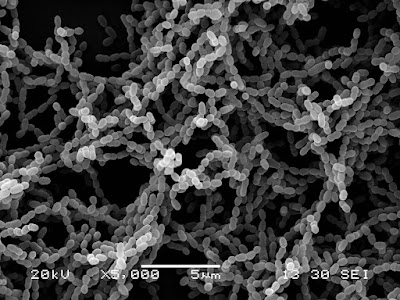 Streptococcus mutans is a bacteria involved in tooth decay. Individual colonies on your teeth grow into a biofilm. Emily's research looked at a gene involved in the formation of the biofilm. I'll leave further explanation to Emily in the comments if she wishes. Emily's advisor is Dr. Grace Spatafora, who has done considerable research on S. mutans.

We are having a rare late spring snow storm. Here is our back deck this morning. There is 12 inches of snow on the ground, and it is still snowing lightly. It is wet, heavy snow. The temperature is 31 degrees F. 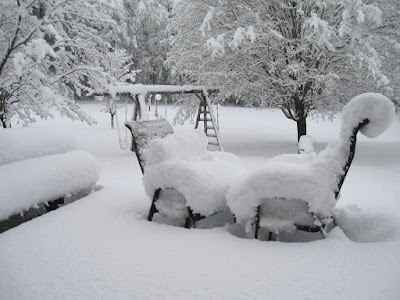 Two other late spring snow storms stand out in my memory.

One snowstorm was April 16-17, 1983, and I camped out in it. Here is the entry from my hiking journal: "Sterling Mtn., G alone, overnight. On snowshoes. Up LT. Stayed at GMC lean-to. 16" snow overnight. Down lift line. After mountain closed for skiing."

The other snowstorm was in May, on Mother's Day Weekend, sometime in the 1990s. We were in Ottawa visiting friends that weekend. While I didn't camp out in this snowstorm, one of my co-workers did. We drove home from Ottawa on Sunday through a very snowy northern New York. I later found out that one of my co-workers who lives in that part of northern New York was on a Boy Scout camporee that weekend just across the border in southern Quebec. When she woke up Sunday morning in her tent, she wondered why it was so quiet. It was because everything was covered in snow!

UPDATE 5/10/10: Nancy and I were in Maine for a long weekend, so we missed it, but there was snow on the ground at our house for Mother's Day (yesterday)! When we got home this afternoon, there was just a trace of snow in the shadows. It was completely gone within an hour. Our neighbor said there was snow on the ground for about 24 hours, from late Saturday afternoon to late Sunday afternoon. No significant accumulation, just enough to make the ground white. There was no snow where we were in Maine (Orono). Just a cold rain.
Posted by George Putnam at Wednesday, April 28, 2010 No comments:

I had the pleasure of speaking to the Student Investment Committee at Middlebury College on April 14. I gave a talk titled the 5 C's of Credit, but I also talked about Yankee Farm Credit, the Farm Credit System, GSEs, mathematical risk models and employment opportunities in Farm Credit. The talk was at the invitation of Dr. Scott Pardee, the faculty advisor of the SIC. And it all happened because of Congcong.

Last Christmas Congcong was telling me about a paper that she had written for an economics class. The paper was about how over-reliance on mathematical models had contributed to the financial crisis of 2008. That is a topic that interests me. Indeed, I had blogged about it last September, and I had mentioned one of Congcong's references in this post (the article by Felix Salmon in Wired Magazine).

Well, one thing led to another. I contacted Congcong's professor (Dr. Pardee) out of curiosity, and it eventually led to an invitation to give this talk. There were about 25 students at the talk. Before the talk, we went out to dinner at Fire & Ice. There were two professors (Dr. Pardee and Dr. Steve Pecsok) and I think nine students at dinner, plus me. The entire evening was a lot of fun. Thank you, Congcong! (And thank you, Dr. Pardee.) 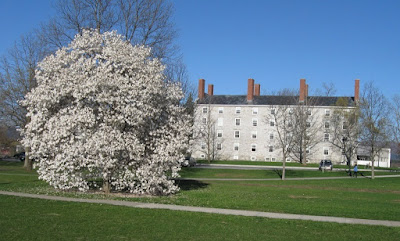 The photo is an apple tree in full bloom in front of Painter Hall, a few hours before my talk.
Posted by George Putnam at Monday, April 19, 2010 No comments:

Among Weathercasters, Doubt on Warming
Posted by George Putnam at Thursday, April 01, 2010 No comments: