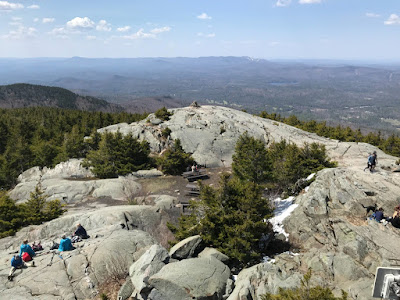 Mount Kearsarge in New Hampshire is a popular hiking destination with an open summit and easy access from two state parks. From the south, the summit can be reached from Rollins State Park by the Lincoln and Rollins Trails, each approximately 1/2 mile. Access from Winslow State Park northwest of the mountain is via the Winslow Trail (1.1 miles) and the Barlow Trail (1.7 miles). Today we hiked up the Winslow Trail and down the Barlow Trail. (trail map)
There is a communications tower and a fire tower on the summit. The fire tower is operated by the NH Division of Forests and Lands and is generally open to the public when staffed. It was staffed today; indeed, we are having a dry spring this year and there are forest fire warnings across the northeast. But the top of the tower was closed because of COVID. The photo above was taken from the tower stairs just below the top. The view is looking south. Visible are the summit cairn and picnic tables in a sheltered spot.
The photo below is also from the fire tower, looking down at Nancy, a communications antenna, and the glacial striations in the exposed granite: 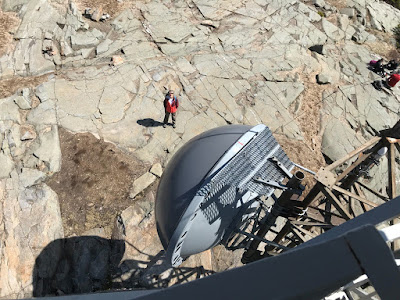 Mount Kearsarge is 2937' high. From Wikipedia:

The name of the mountain evolved from a 1652 rendering of the native Pennacook tribal name for the mountain, Carasarga, which it is surmised means "notch-pointed-mountain of pines".

The bare summit is the result of a 1796 forest fire.
A famous Civil War ship was named Kearsarge. The USS Kearsarge was built at the Portsmouth Navy Yard in Kittery, Maine, in 1861, and in 1864 it defeated the CSS Alabama off the coast of France in the Battle of Cherbourg.
The commander of the USS Kearsarge was Captain John Winslow, later promoted to admiral. Following the Civil War a summer hotel known as the Winslow House was erected in his honor on the northwest slope of Mount Kearsarge. The hotel was abandoned and burned long ago, but the foundation is visible in the picnic area for Winslow State Park, which was named for the hotel.
Mount Kearsarge is the highest point on the Sunapee Ragged Kearsarge Greenway, a 75-mile trail that circles Lake Sunapee. The Lincoln and Barlow Trails are part of the SRK Greenway.
The photo below is looking north from the Barlow Trail: 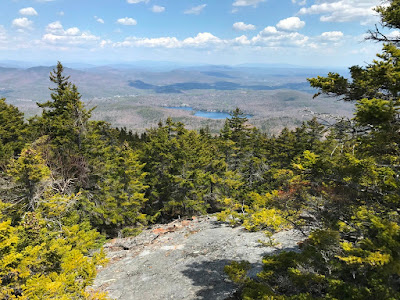 The lake is Bradley Lake in the town of Andover. Although it didn't come out in the photo, we could just barely see on the horizon the snow-covered cone of Mount Washington.
More information about Mount Kearsarge can be found on the websites for Winslow State Park and Rollins State Park.
There are actually two mountains in New Hampshire named Kearsarge, and there is some dispute as to which mountain the 1861 USS Kearsarge was named for. We climbed Mt. Kearsarge in Merrimack County near Warner. The other mountain is located farther north in Carroll County near North Conway and is known as Kearsarge North.
This interesting New York Times article dated February 18, 1894 discussed the naming dispute and an alternate theory about the origin of the name "Kearsarge":
HEZEKIAH SARGENT'S MOUNT / ORIGIN OF THE NAME OF THE FAMOUS OLD KEARSARGE. Not an Indian Word, but Derived from the Name of the Owner of One of New Hampshire's Granite Hills – Two Kearsarge Mountains for Both of Which the Honor of Naming the Destroyer of the Alabama Is Claimed
Found via the Bartlett (NH) Historical Society here. If the NYT article is behind a paywall, the Bartlett Historical Society saved a copy here.
Posted by George Putnam at Saturday, April 24, 2021 No comments: