Last summer on Independence Day I wrote about the idea of SLOW Government:

Lots of exciting things have happened since then! At the end of that post are updates that describe two subsequent developments by other Vermonters: Biddle Duke of Stowe and Susan Clark of Middlesex.

Today on Presidents' Day I write about another development.

It will be a joint presentation with Susan Clark, mentioned above. Susan is co-author of Slow Democracy: Rediscovering Community, Bringing Decision Making Back Home. This book, published in September 2012, is a wonderful exposition of what I mean by the "L is for local" aspect of SLOW Government.

Susan and I did not know each other until last month. We were introduced by the organizers of the Slow Living Summit at the suggestion of the publishers of Susan's book.

Governments derive their legitimacy from the consent of the governed. Public approval of government has fallen to dangerous lows. Susan and I independently had the thought that the philosophy of "slow" contains ideas that can help turn around this troubling trend. We are now working on a joint presentation about those ideas for next summer's Slow Living Summit.

Many thanks for the feedback from people who read my July 4th post on the idea of SLOW Government. I have revised the language in that post from time to time based on that feedback. The original idea remains unchanged, but hopefully the explanation is more lucid. Click here to read the explanation of SLOW Government. Continued feedback is welcome.

And with this update on SLOW Government, I wish you a happy Presidents' Day!
Posted by George Putnam at Monday, February 18, 2013 No comments:

Last Sunday was one of the best days of the winter! It was sunny and, while it started out cold, it warmed up to the mid 20s (F).

We snowshoed the Long Trail south from the Plot Road to the Hogback Road, about four miles. There were ten people in our group. We stopped at Roundtop Shelter to enjoy a little hot chocolate and peppermint schnapps: 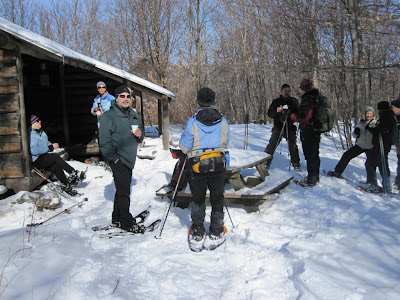 Elevation at the shelter is 1650'. This was nearly the highest point on the hike.

We found a number of pretty ice formations: 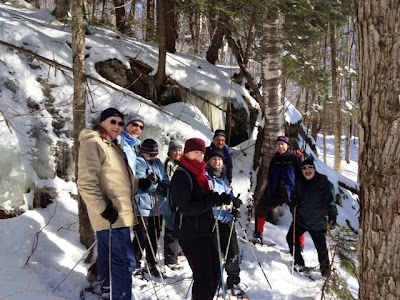 Here's most of the crew at Prospect Rock: 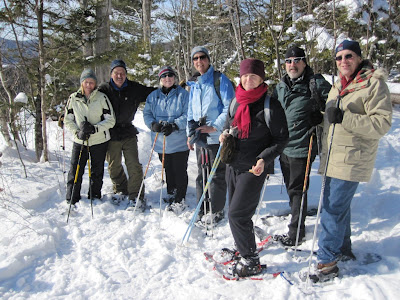 Almost at the end of the hike, this view is looking steeply downhill at the Hogback Road and the Lamoille River: 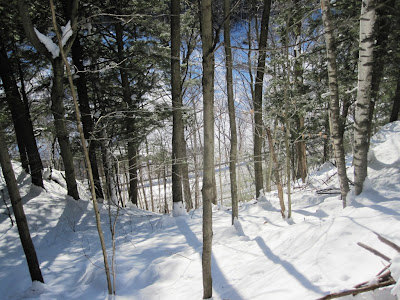 We saw many deer tracks throughout the day but especially between Prospect Rock and the Hogback Road. Didn't see any deer, though.
Posted by George Putnam at Sunday, February 17, 2013 No comments: