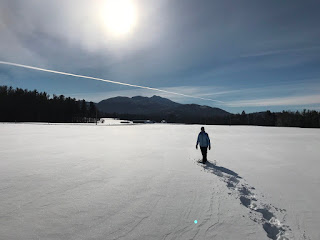 Backcountry recreation is growing in popularity in my town of Cambridge, Vermont, and in northern New England generally. By "backcountry" I mean off-road, not necessarily deep wilderness. The photo above was taken yesterday in a field at the West Farm in Cambridge, owned by the Brewster Uplands Conservation Trust, which in turn is owned by the Vermont Land Trust. The farm property includes seven miles of multi-use trails open to the public. Mount Mansfield, Vermont's highest mountain, is in the background.

Smugglers' Notch Resort is a four-season resort, and the scenic road through Smugglers' Notch is popular in spring and summer and especially during fall foliage season. Other summer backcountry recreation in Cambridge includes hiking on a wide variety of trails, bicycling of all kinds, and paddling on the Lamoille River. All of these activities, in all seasons, have increased in recent years.

I have been interested and a little surprised to learn about so many organizations that exist to support backcountry recreation all across Vermont and northern New England. In addition to the organizations linked above, here are a few more that I recently came across:
No doubt there are many more, but this gives you an idea of the breadth and depth of organizations out there.

It should not be surprising that Vermont is a leader in backcountry recreation. The concept of long distance hiking has deep roots in Vermont, with the creation of the Green Mountain Club and the Long Trail in 1910, which in turn inspired the Appalachian Trail. Regular readers of this blog may recall that Nancy and I spent several days on the Long Trail in 2017 (details here).

In fact the concept of long distance hiking in Vermont goes back nearly a century before the creation of the Long Trail to one Alden Partridge (1785-1854). The link is to an article about Partridge by Vermont historian Mark Bushnell. Partridge was a native of Norwich, Vermont. He attended nearby Dartmouth College before transferring to West Point. In 1819 he founded what is now Norwich University, the oldest private military academy in the United States. The school was originally in Norwich, hence the name, but it has been in Northfield since 1866. Partridge's backcountry hiking exploits were legendary, as described in Mark Bushnell's fascinating article which includes an account of a bushwhack ascent of Mount Mansfield in 1818, the year before Partridge founded Norwich University.

Today the town of Norwich (about the size of Cambridge) is still making news, as noted in this New York Times article last month: A Tiny Vermont Town Is a Big Cradle of Olympians (subscription probably required, sorry). But that's merely the Olympics. In this post I am interested, like Norwich's native son Alden Partridge, in backcountry – and I am proud to say that Cambridge is the home of Backcountry magazine.

So, I am part of Cambridge town government. What are the implications here for government? That is a topic for my other blog, The Switchel Philosopher.

Posted by George Putnam at Monday, January 08, 2018 No comments: 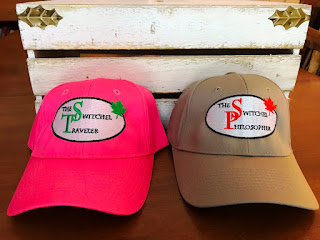 Today I am renaming this blog to "The Switchel Traveler."

Henceforth my two blogs are:
"The Switchel Philosopher" is for adventures in the world of ideas. The tag line is:

What is a proper relationship between a free people and their government?


"The Switchel Traveler" is for travel adventures in the physical world. The tag line is:

There are more things in heaven and Earth, Horatio, than are dreamt of in your philosophy.

Switchel is a non-alcoholic beverage dating back to Colonial times. My mother made switchel for our family when I was growing up on the farm, and we drank a lot of it in the hayfield.

The main ingredients in switchel are sugar, vinegar, ginger and water. The sweet and sour of sugar and vinegar are the yin and yang of switchel. In my part of the world (Vermont), the sugar is usually maple syrup and the vinegar is almost always apple cider vinegar. But variations are allowed. Honey and pomegranate vinegar are also good. Sometimes additional ingredients are added such as lemon juice (or even rum!). Today, commercial versions of switchel are available, for example Vermont Switchel and Up Mountain Switchel.

Oh, another thing about switchel. The ginger tends to settle out, so you have to shake it before drinking. Sometimes life is like that, too.

"The Switchel Philosopher" is my most recent blog. I started it in February 2017, after retiring in December 2016. It is about adventures in the world of ideas, including government and citizenship. Being elected to the town selectboard in March 2017 has contributed to some of the themes on this blog.

"The Switchel Traveler" – this blog – is an older blog and has had two previous names. I started the blog in 2007 as "George's Home Blog" to distinguish it from my "work blog" which I also started in 2007. After retiring, the work/home distinction was not applicable any more, and I renamed this blog to "George's Other Blog" to distinguish it from "The Switchel Philosopher." Today I am renaming it again, this time to "The Switchel Traveler" to more clearly indicate how my two personal blogs complement each other.

Post retirement, my two personal blogs have different and distinctive themes:
Prior to retirement, I blogged about both themes on both my "work blog" and my "home blog." Examples of both themes on my "work blog" included Trip to China and Values. My "home blog" has always included travel adventures. Prior to retirement it also included adventures in the world of ideas, some of which are captured by the labels culture, money, reality and slow.

There are also some earlier adventures in the world of ideas on "George's VAFPDB Blog." I published ten posts there in 2012-13 before resigning from the Vermont Agricultural and Forest Products Development Board.

Posted by George Putnam at Monday, January 01, 2018 No comments: