The following graphs show the state of COVID-19 in Vermont during this period: 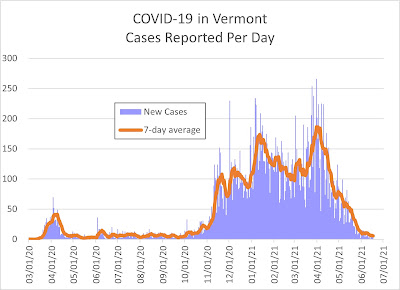 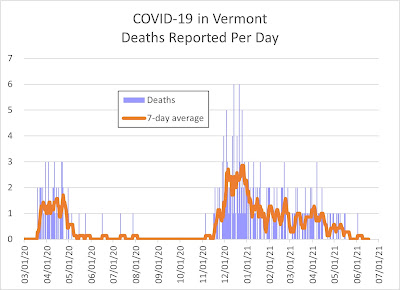 The 7-day average of new cases per day has been below 15 since May 29 and is trending toward zero. There has been only one death attributed to COVID-19 since May 16.

I published these graphs at the end of May last year (link). At the time, COVID-19 was fading away. In fact, the pandemic in Vermont was minimal all last summer. It came roaring back last fall, worse than the initial wave, as shown in the graphs above.

Why do we think this year will be different? Why are we not concerned about another wave in the fall? Because of the vaccines.

In December 2020 the U.S. Food and Drug Administration approved COVID-19 vaccines developed by Pfizer and Moderna. The FDA approved a third vaccine by Johnson & Johnson in February 2021. (Links are to the FDA approvals.)

The single-dose Johnson & Johnson vaccine has not been a significant factor, partly because of production problems and partly because of concerns about side-effects. The Pfizer and Moderna vaccines, which require two doses spaced three or four weeks apart, have been widely used and are highly effective. The Pfizer and Moderna vaccines are a revolutionary new technology called mRNA vaccines.

Supplies of the Pfizer and Moderna vaccines were initially limited, but soon ramped up. Oldest people generally received the vaccine first in Vermont. The first doses were administered before the end of December 2020. Nancy and I received our two doses in March 2021. Starting April 19, all Vermonters age 16 and older could register for a vaccine (link). Walk-in clinics, with no registration required, opened soon thereafter.

Governor Phil Scott had stated that the lockdown would end when 80% of eligible Vermonters had received at least one dose of any of the three vaccines. He announced on June 14 that this threshold had been reached (link). This news in Vermont made the front page of the Wall Street Journal on June 15 (link) with a dateline of Fairfax, a town adjacent to my town of Cambridge.