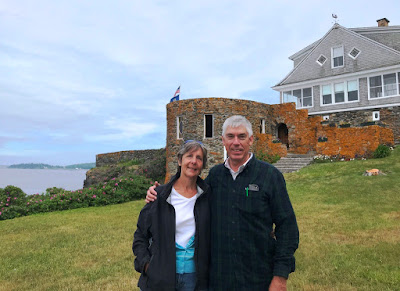 Robert Peary built an unusual home on Eagle Island in Casco Bay off the coast of Maine in 1904. The house was built to resemble a ship. The two photos below show the house from the front (bow) and the rear (stern): 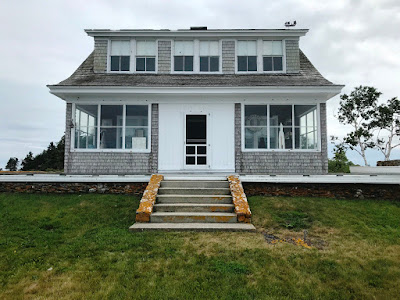 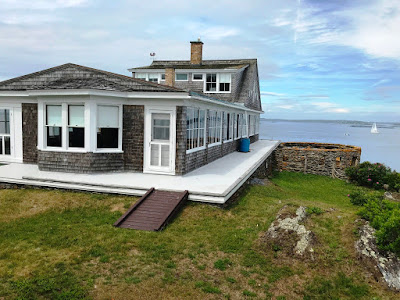 Inside the house is a unique three-sided fireplace, each side constructed with a different kind of stones found on the island: 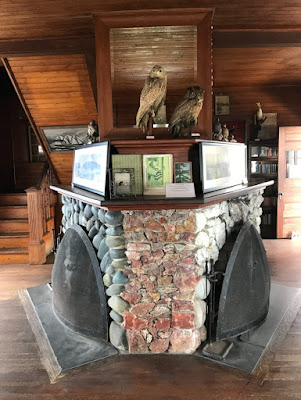 Robert Peary (1856-1920) was an explorer who won renown for his Arctic expeditions, especially his 1909 expedition which was widely credited as the first to reach the North Pole. While he was an officer in the U.S. Navy for 30 years (1881-1911), retiring with the rank of rear admiral, his Arctic expeditions were privately financed and undertaken while on leave from the Navy.

Peary fell in love with Eagle Island while exploring the coast of Maine as a student at nearby Bowdoin College, from which he graduated in 1877 with a degree in civil engineering. He was also an accomplished surveyor and taxidermist. The house on Eagle Island contains many examples of his taxidermy work, some of which are visible on the fireplace mantel above.

In addition to the main house on Eagle Island, Peary also built the caretaker's cottage shown in the photo below: 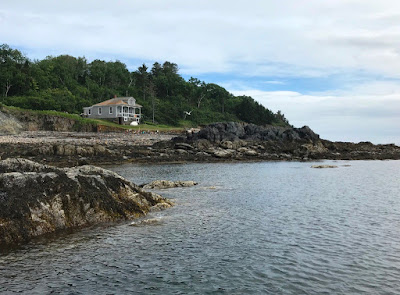 Eagle Island remained in the Peary family until 1967 when they donated it to the State of Maine for a state park. See Eagle Island State Historic Site and Friends of Peary's Eagle Island.

The island is accessible only by boat. While commercial transportation is available, we visited today via the private boat of our friends Pam and David: 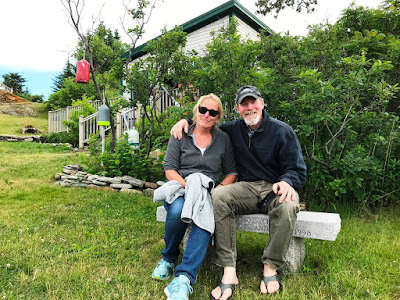 The building behind Pam and David is the Welcome Center, built in 2014. It is the first building one encounters after walking off the dock. Here visitors can watch the 10-minute film "Admiral Robert E. Peary – A Man and His Island" and pick up an audio wand for a free self-guided tour of the Peary home, now called the Peary Museum and containing many interesting artifacts and displays. There are also gardens and walking trails on the 17-acre island.

Robert Peary's study and library is the round stone structure behind Nancy and me in the photo at the top of this post. Visible in three of the photos above is the wind vane on top of the Peary house. It is in the shape of the Roosevelt, Peary's arctic ship, named for his friend President Theodore Roosevelt.

The granite bench on which Pam and David are sitting says:


That was Pam's uncle. 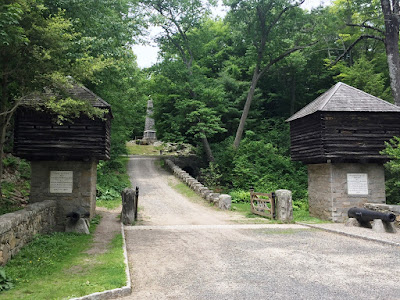 In the middle of the American Revolutionary War, a portion of the Continental Army spent the winter of 1778-79 at three camps in southwestern Connecticut. The main camp in Redding is remembered today as Putnam Memorial State Park, so named because the troops were under the command of Major General Israel Putnam.

The park's nickname is "Connecticut's Valley Forge." Why this nickname?

The previous winter (1777-78) the Continental Army under General George Washington had encamped at Valley Forge in Pennsylvania. It was a difficult winter for the army and a significant event in the national memory:

Few places evoke the spirit of patriotism and independence, represent individual and collective sacrifice, or demonstrate the resolve, tenacity and determination of the people of the United States to be free as does Valley Forge.

While the Connecticut encampments were smaller than Valley Forge, about 3,000 men as compared to 12,000 men, the winter conditions and lack of supplies were equally challenging.

Israel Putnam (1718-1790) was born and raised in Massachusetts, but he lived his adult life in Connecticut. He was a successful farmer and tavern keeper. At the relatively old age of 37 he volunteered for military service in the French and Indian War (1754-63) and achieved renown as a military leader. The Continental Congress appointed Putnam one of four major generals under General George Washington in the American Revolutionary War (1775-83), and for much of the war he was Washington's second in command.

Many of the displays at Putnam Memorial State Park are about Major General Israel Putnam – understandably so, since he was from Connecticut. Israel Putnam was a character, and there are many stories about him. Following are two that are told at the park.

On April 20, 1775, Israel Putnam was plowing a field on his farm in northeastern Connecticut when a messenger on horseback delivered the electrifying news of the Battles of Lexington and Concord the day before – "the shot heard round the world." Putnam unhitched his horse from the plow, leaving the plow in the field, and rode away to volunteer his services in the war that he knew had now begun. He was 57 years old. He rode 80 miles to Cambridge, Massachusetts, arriving the next day. Two months later, on June 17, he was one of the commanders of the colonial forces at the Battle of Bunker Hill. The "Putnam Plow" is now in the visitors center at the park: 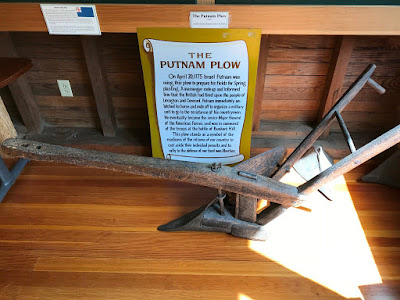 Later in the war, during the winter of "Connecticut's Valley Forge," Putnam was pursued by the British in Greenwich, Connecticut. He barely escaped on his horse by riding down a steep hillside where the British chose not to follow. They shot at him but hit only his hat. He was then 61 years old. It is unclear if he actually rode down stone steps on that winter day in February 1779, but that is how the story was told – as depicted by this statue by Anna Hyatt Huntington near the park entrance: 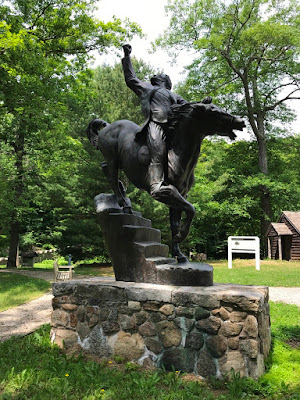 Israel Putnam's military career ended in December 1779 when he suffered a debilitating stroke. 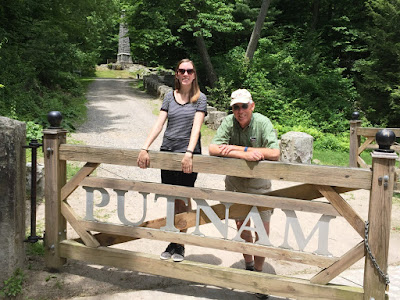 We visited Putnam Memorial State Park today. Are we related to Israel Putnam? Same family tree, but not direct descendants.
Posted by George Putnam at Saturday, June 09, 2018 No comments: