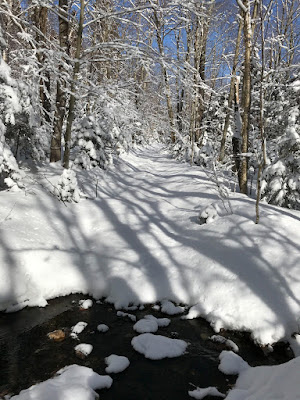 Today we snowshoed a section of the Madonna Vasa Trail. It was a beautiful day! 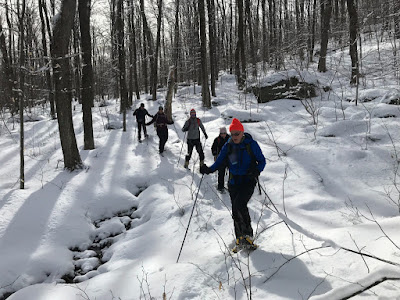 Our party of six snowshoed from Smugglers Notch Ski Area to Iron Gate Road, a distance of perhaps five miles. There was about a foot of snow on the ground in most places, less here than on our hike a few days ago on Laraway Mountain. A fresh snowfall of 2" overnight made for pleasant snowshoeing. When we started it was clear and sunny, about 20 degrees F. By the time we finished, it had become cloudy and warmed up to 30 degrees F.

We saw several old cellar holes, signs of civilization past: 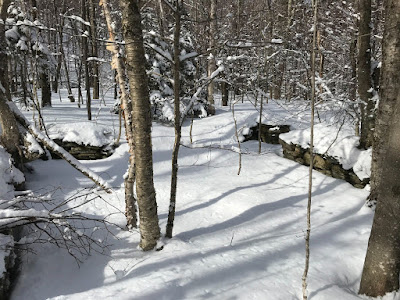 And we saw signs of civilization present: a logging operation and three maple sugaring operations. The photo below is a typical pipeline system for collecting sap from sugar maple trees: 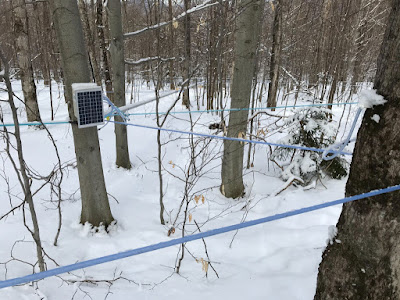 The box on the tree in the photo above is a solar powered Tap Track wireless vacuum monitoring system. Maple sap pipelines are on vacuum, and they work best when there are no leaks. The Tap Track system helps the sugarbush operator identify the location of leaks.

The Madonna Vasa Trail was built in the early 1960s for cross-country skiing. The full trail extended about 14 miles along the side of Mount Mansfield, Vermont's highest mountain, from Smugglers Notch Ski Area in Cambridge to Mountain Road in Underhill (the road to Underhill State Park). There were cross-country ski races on the Madonna Vasa Trail in most years 1967-1975, as snow conditions permitted, but use of the trail declined after that.

Nevertheless, we found several kinds of trail markers in the woods. The tree below had three kinds of markers: rectangular metal, faded plastic diamond, and newer plastic diamond. 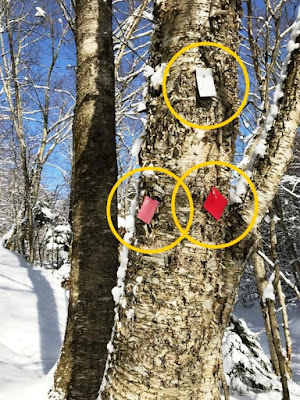 The tree below had a plastic diamond indicating that the trail turned right, plus a plastic circle: 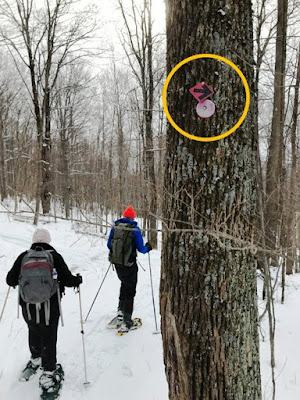 We also saw round metal markers: 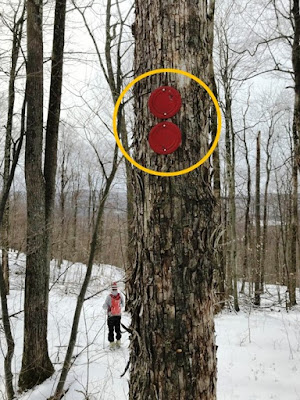 The Madonna Vasa Trail was named after Madonna Mountain (one of the mountains in Smugglers Notch Ski Area) and the Vasaloppet – a famous cross-country ski race in Sweden inspired by a legendary ski run in 1520 by Gustav Vasa, later King Gustav I and considered the founder of modern Sweden. "Vasaloppet" is Swedish for "Vasa race."

Thanks to Joel Page for organizing today's adventure. Most of us on today's outing had snowshoed a portion of today's trek in 2012, also led by Joel.
Posted by George Putnam at Saturday, February 17, 2018 No comments: 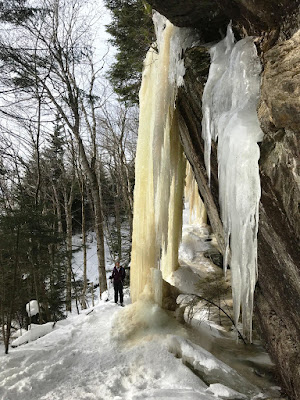 The Long Trail on Laraway Mountain goes under south-facing cliffs which form impressive ice columns in the winter! 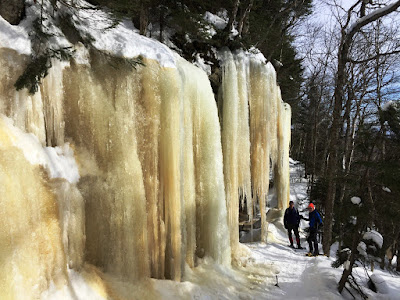 Just above those cliffs is a lookout. The mountains on the horizon to the right of the tree in the second photo below are Whiteface, Madonna and Mount Mansfield. 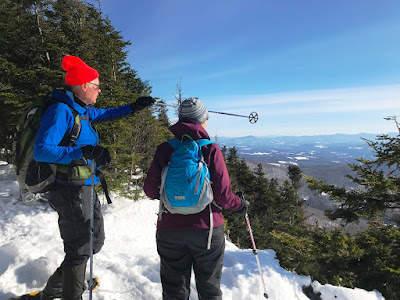 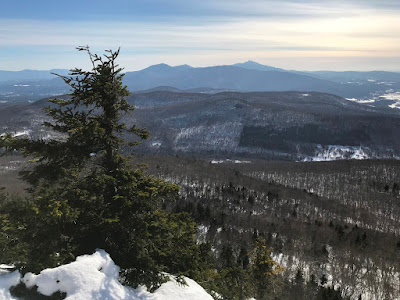 Laraway Mountain is in Waterville, Vermont. Today Joel, Nancy and I snowshoed the Long Trail from Codding Hollow to the lookout on Laraway Mountain, about two miles each way. It was a sunny day with light winds and temps in the low 20s. There was about two feet of snow in the woods, much more than at home, but we did not have to break trail. The trail was well packed, although we saw no one.

At the lookout we saw a dozen or so ravens having fun in the sky. (I took photos, but failed to get a good one.) We could see Lake Champlain and the Adirondack Mountains of New York on the far side of the lake. It was a beautiful day.

Below is another photo of the ice formations on our way down from the lookout: 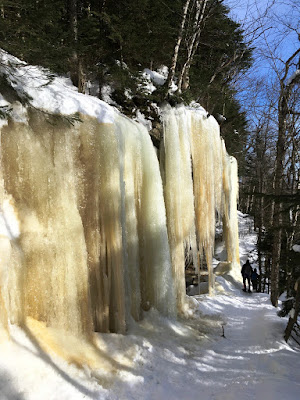 The best day in winter is better than the best day in summer! (I've said that before.)
Posted by George Putnam at Tuesday, February 13, 2018 No comments: