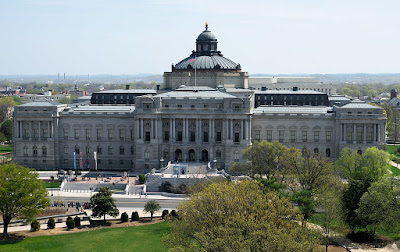 The Library of Congress is one of the treasures of Washington. Congress established a library for itself in 1800 when the federal government moved from Philadelphia to Washington. The initial collection was housed in the Capitol, and was mostly lost when the British burned the Capitol in August 1814 during the War of 1812. Congress restocked the collection by purchasing the much larger personal library of Thomas Jefferson, then in his 70s and retired from public service.

Construction of a separate and permanent home for the Library of Congress began in 1890 and the building (pictured above) opened to the public in 1897. The building was named the Thomas Jefferson Building in 1980.

The exterior architecture of the central section was inspired by the Palais Garnier in Paris. The interior is richly decorated with paintings, mosaics, sculptures, and other works of art. Below is one of the marble staircases in the Great Hall. A bust of Thomas Jefferson is below the staircase. The statue on the newel post is a woman holding a torch of electric light – it was the first public building in Washington to be built with electricity installed. 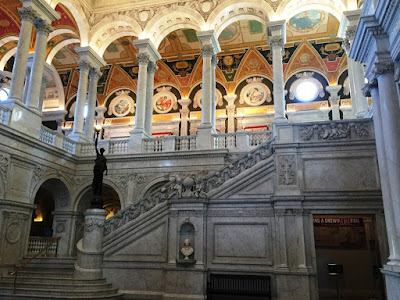 Below is a portion of the upstairs of the Great Hall. 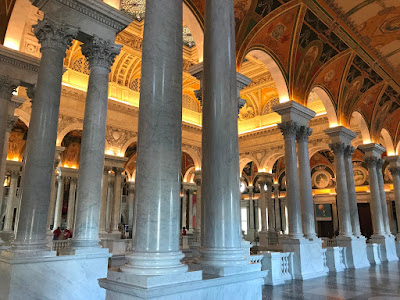 One of the most beautiful rooms in the Thomas Jefferson Building is the Main Reading Room, available to researchers, pictured below. 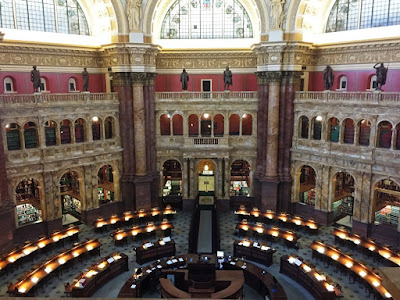 Outside the viewing gallery for the Main Reading Room is a mosaic of Minerva, the Roman goddess of learning and wisdom. Her attention is directed at a scroll listing various fields of knowledge. Minerva is also the goddess of strategic warfare. Her helmet and shield are laid on the ground, but she is holding a long, pointy spear just in case. (More info here, scroll down.) 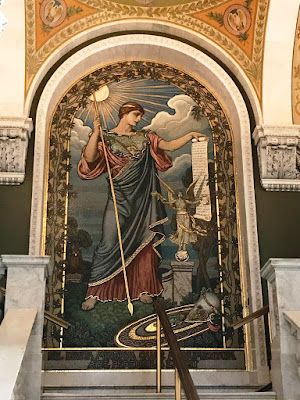 One of the excellent permanent exhibits in the Thomas Jefferson Building is Exploring the Early Americas. This exhibit explores the indigenous cultures that existed prior to the arrival of Europeans, and the profound changes wrought by the meeting of European and American cultures. This exhibit includes the only known copy of the 1507 world map by Martin Waldseemüller, the first known map to use the word America.

Another popular exhibit is the Gutenberg Bible.

This year is the 100th anniversary of passage in Congress of the 19th Amendment giving women the right to vote. The Library of Congress has a special exhibit titled Shall Not Be Denied: Women Fight for the Vote, but the exhibit was not open when we were there. We left Washington on June 3 and the exhibit opened on June 4, the 100th anniversary of approval by the Senate. The House of Representatives had approved it on May 21, 1919. The 19th Amendment was ratified by the required number of states on August 18, 1920. This special exhibit will run until September 2020.

Subsequent to opening of the Thomas Jefferson Building in 1897, two additional buildings for the Library of Congress were built on adjacent blocks: the John Adams Building (1939) and the James Madison Building (1980). But the Library of Congress is the largest library in the world, and even these three buildings are not sufficient to hold all its collections. Additional storage is at Fort Meade in Maryland.

The Library of Congress is a leader in digitizing library resources including manuscripts, maps, and photographs. Online researchers can start here: Digital Collections.

Credit for the photo at the top of this post: Architect of the Capitol.