Getting around in Washington 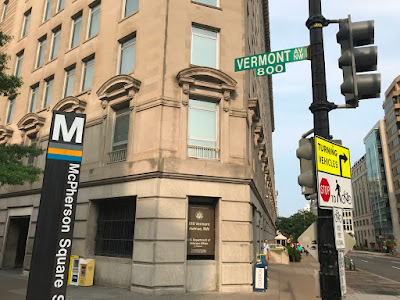 How did we get around in Washington? Mostly by walking. Washington is a great city for walking. It is mainly flat, sidewalks are wide, and around much of the National Mall one has a choice of walking on pavement, gravel, or grass.

Walking was enjoyable. The architecture and landscapes are interesting everywhere one turns. And there are no skyscrapers. The "feel" of the city for a pedestrian is much more enjoyable than a city with tall skyscrapers.

Distances are considerable, however. There is a lot of walking to be done. Consider the triangle formed by the Capitol Building, the Washington Monument, and the White House:
For longer distances, the Metro worked well. We took the Metro between Ronald Reagan Washington National Airport and our hotel, and on other occasions when we were traveling far from our hotel. The photo above shows a sign for the McPherson Square Metro Station near the White House.

Sometimes we rode the free "Circulator" bus which has several routes that are useful for tourists.

Electric scooters have become popular in recent years in some cities. There were many scooters of various brands in Washington. We tried them out on a Sunday morning when there were fewer people out and about. (There are countless school groups in Washington at this time of year.) We rode scooters from near our hotel to the Lincoln Memorial, stopping for pictures: 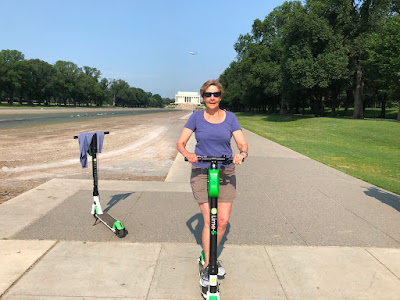 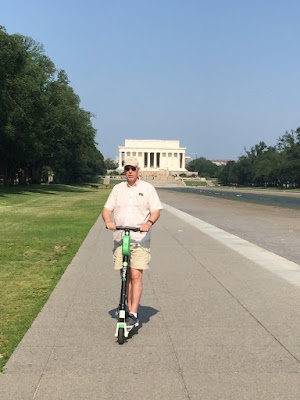 In the photos above, the Reflecting Pool between the Lincoln Memorial and the World War II Memorial was dry. We did not learn why.

We flew from Vermont to Washington. At no time after leaving Vermont were we in a car. We did not rent a car (parking rates at the hotel were high), nor did we ever take a taxi or Uber. Plenty of other people, however, were on the roads which were congested with cars and tour buses.

For us, walking – with occasional use of public transit and one time on electric scooters just for fun – was perfectly satisfactory for getting around in Washington as a tourist at this time of year.