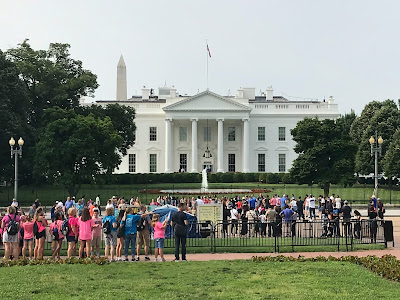 The White House, where the president and family live, is the seat of the executive branch of the federal government (Article Two of the Constitution). The photo above, taken from Lafayette Square, shows the North Portico. The White House lies directly north of the Washington Monument, which is visible behind the White House.

Construction on the original White House, in the same location as the current building but much smaller, began in 1792 and was ready for occupancy by President John Adams in the fall of 1800 when the federal government moved from Philadelphia to the new city of Washington. Every president except George Washington has lived in the White House.

During the War of 1812, which took place during the presidency of James Madison, the British invaded Washington in August 1814 and burned many buildings including the Capitol and the White House. Reconstruction began the next year, and the building has been expanded at various times over the years.

The photo above shows the center section of the White House, the Executive Residence. Not shown in the photo are the East and West Wings which house offices. The Oval Office is in the West Wing. Additional executive offices are in the Eisenhower Executive Office Building located just west of the White House.