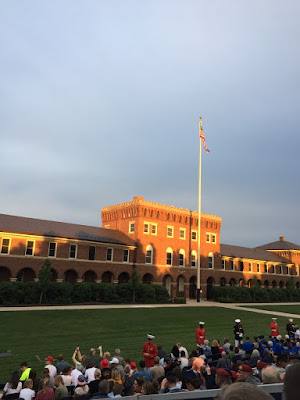 The Evening Parade at Marine Barracks in Washington, DC is a wonderful performance to see. The parade is on Friday evenings in the summer. The photo above shows the parade ground as the sun was setting, about a half hour before the parade began. Marine Barracks, also known as "8th and I" because it is located at 8th and I Streets in the southeast quadrant of Washington, is the oldest post in the Marine Corps, having been established in 1801.

The Evening Parade involved three components:
These units perform many ceremonial functions throughout the year including performances for the President of the United States and guests, and burial ceremonies at Arlington National Cemetery.

The photo below shows the color guard marching in front of the stands: 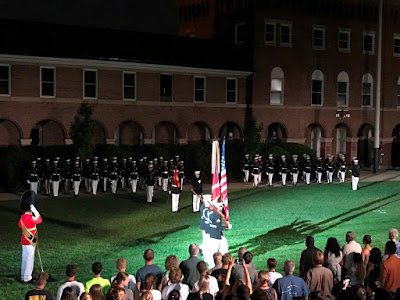 All units are on the field in the photo below. Band members are in red and white, while the ceremonial marchers are in blue and white. The two bands are marching together here, but sometimes they marched separately or through each other. 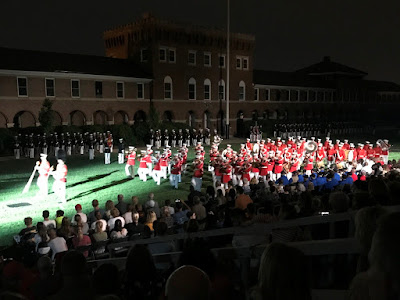 Another photo of all units on the field, mostly playing in place this time: 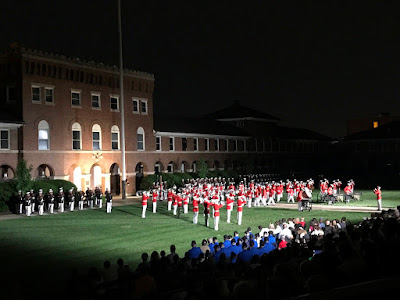 
The photo below shows the ceremonial marchers in front of the stands. 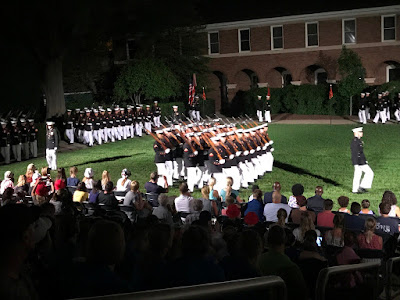 Alas, I do not have any photos of the Silent Drill Platoon's precision drills with M1 Garand rifles with fixed bayonets. That occurred too far away from us for good photos. It was spectacular, but we should have brought binoculars for better viewing.

The flag flying above the parade ground was the Star-Spangled Banner, which was the flag flown when the post was established in 1801. The Star-Spangled Banner was the only version of the United States flag to have more than 13 stripes. It had 15 stars and 15 stripes, recognizing the 14th and 15th states, Vermont and Kentucky, and was in use from 1795 to 1818. Subsequent flags reverted to 13 stripes recognizing the original Thirteen Colonies, and added one star for each new state.

The flag was lowered at the end of the performance: 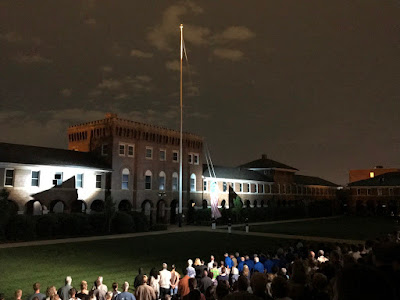 As noted in earlier posts, the British invaded Washington in August 1814, the month before the Battle of Baltimore, and burned many buildings including the Capitol and the White House. For some reason, the British spared Marine Barracks including the Commandant's House, still standing at the end of the parade ground as shown in the photo below taken before the evening's festivities began. 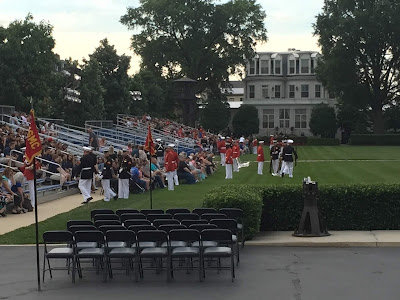 One of the fun aspects of the Evening Parade at Marine Barracks was that before the parade, the Marines visited with the spectators in the stands. They were impressive young men and women, and they enjoyed visiting with the spectators, especially the many veterans present.