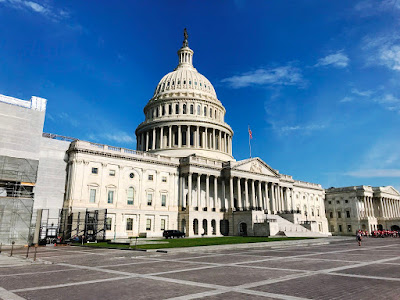 The Capitol is the home of the legislative branch of the federal government (Article One of the Constitution). The photo above shows the east side of the Capitol. The Senate is in the north wing (to the right in the photo) and the House of Representatives is in the south wing. Exterior restoration work has been completed in recent years on the central dome and the Senate wing, and is currently underway on the House wing (hence the scaffolding). The Capitol lies directly east of the Washington Monument.

Construction on the original Capitol, in the same location as the current building but much smaller, began in 1793 and was completed in stages. Congress began using the building in the fall of 1800, but a House wing was not completed until 1811. That was just in time for the War of 1812. In August 1814 the British invaded Washington and burned the Capitol. Reconstruction began the next year. Major additions were made to the Capitol in the 1850s and the 1950s. The underground Visitor Center was completed in 2008.

The statue on top of the Capitol dome is the Statue of Freedom. In the Visitor Center is the full-size plaster model that was used to cast the bronze statue. 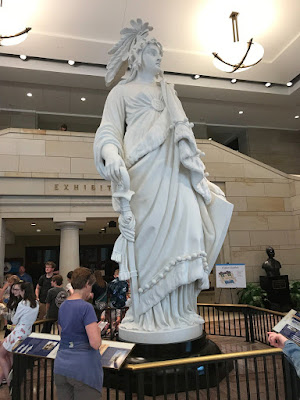 Below is the painting in the eye of the Rotunda: The Apotheosis of Washington. 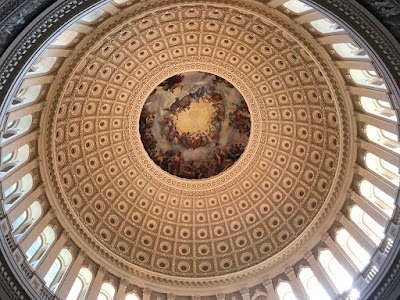 Pictured below is one of Vermont's statues, Ethan Allen, in the National Statuary Hall. Our tour did not take us by the other Vermont statue, Jacob Collamer. 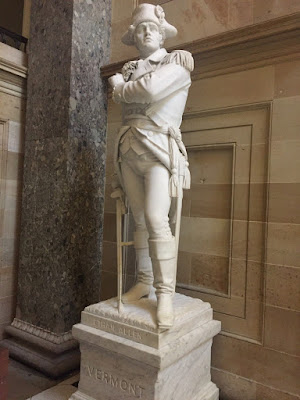 The photo below shows the National Statuary Hall. The House of Representatives met in this room from 1819 to 1857. The statue of Ethan Allen is the statue facing left. 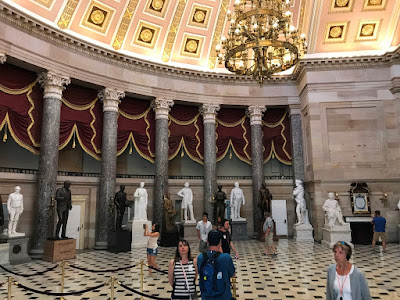 In addition to the standard tour, visitors should inquire in the Visitor Center about special tours offered that day. We had no trouble signing up for two such tours on the day of our visit. These tours tend to be smaller and quieter, and they take you to places in the Capitol that are not on the standard tour.

One of our special tours took us to the Old Senate Chamber. Now used only for special occasions, this room was used by the Senate 1819-1859 and by the Supreme Court 1860-1935. In the photo below, the book marks the desk of Senator Charles Sumner of Massachusetts, where in 1856 Sumner was beaten with a cane almost to death by Representative Preston Brooks of South Carolina. Tensions ran high in the years leading up to the Civil War. 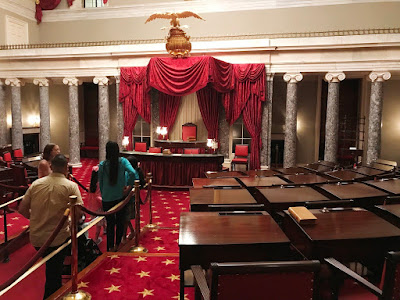 The other special tour took us to the Brumidi Corridors in the Senate wing. These corridors are part of the 1850s expansion of the Capitol. Constantino Brumidi led a team of artists in decorating these corridors with elaborate scenes of American landscapes, flora, fauna, and people. Brumidi used a technique called trompe l'oeil (fool the eye) to make the scenes appear three-dimensional rather than flat. 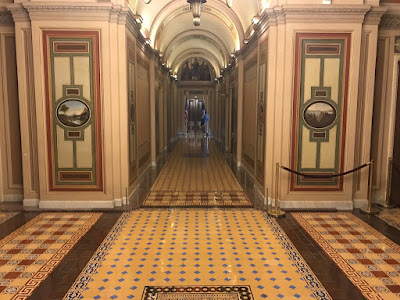 Brumidi also painted The Apotheosis of Washington in the canopy over the Rotunda. Brumidi has been called "the Michelangelo of the Capitol."

Below is a plaque that we walked by on one of our tours: 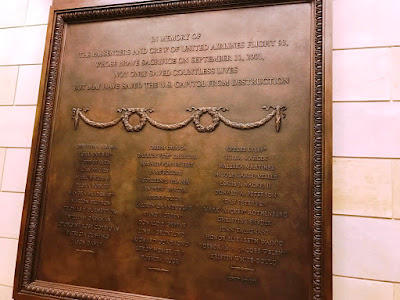 
In memory of the passengers and crew of United Airlines Flight 93, whose brave sacrifice on September 11, 2001, not only saved countless lives but may have saved the U.S. Capitol from destruction.


Washington, DC Trip: Click here for the introductory post about our trip to Washington which lists all of the posts in this series.