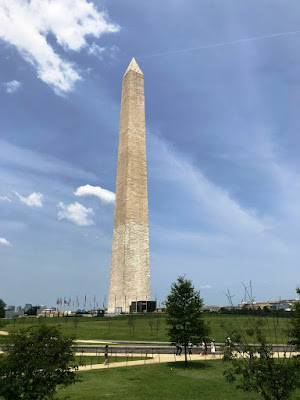 We recently returned from a trip to Washington, DC. There is so much to see and do in Washington! We didn't begin to see everything, and the following posts cover only a portion of what we did see. The emphasis in these posts is on history, architecture, and art. We also saw three live performances: a military band and parade, a symphony, and a Shakespeare play.
Following is a brief history of the founding of Washington.

It took a few years after the American Revolution ended in 1783 for the Thirteen Colonies to develop an effective national government. The Constitution of the United States was drafted in 1787 and ratified in 1788. The first president and the first members of Congress elected under the new Constitution took office in 1789 in New York City, the seat of national government at the time.

The Constitution authorized a "District (not exceeding ten miles square) as may, by cession of particular States, and the acceptance of Congress, become the Seat of the Government of the United States" – but it left the details up to Congress.

Congress passed the Residence Act in 1790 which said that the national capital would be created on the Potomac River, and that the federal government would temporarily move to Philadelphia for the decade 1790-1800 while the new capital was being built. This led to the creation of a new federal city, Washington, in a new federal district, Columbia. The federal government moved to Washington from Philadelphia in the fall of 1800.

The District of Columbia was originally ten miles square (100 square miles), oriented like a diamond, on land along both sides of the Potomac River donated by the states of Maryland and Virginia. In 1846 the federal government returned to Virginia the portion of the district on the west side of the Potomac River, leaving 68 square miles shown in this satellite photo (source): 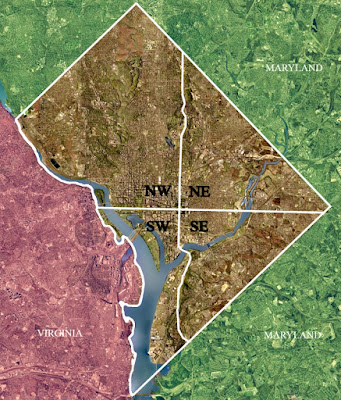 The city and district are divided into four quadrants centered on the Capitol Building. Our hotel was in the southwest quadrant, within walking distance of District Wharf where there is much new development (still ongoing) along the Potomac River. We had several good meals in the Wharf area.

The photo at the top of this post is the Washington Monument, 555 feet tall. Construction began in 1848, but was interrupted by funding issues and the Civil War. (Notice the change in color of the marble where construction was halted for 25 years. When construction resumed, a different kind of marble was used.) The monument was opened to the public in 1888. In recent years the monument has been temporarily closed numerous times for repairs and renovations. It was closed when we were there, reopening in August 2019.

We were in Washington from May 28 to June 3. The photo above was taken before noon on June 1, and the flags around the base of the Washington Monument were at full-staff. When we went by the monument again on June 2, the flags were at half-staff to honor the victims of a tragic shooting at the Virginia Beach Municipal Center in Virginia Beach, Virginia, on May 31: 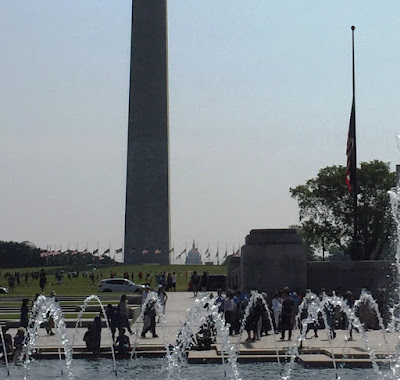