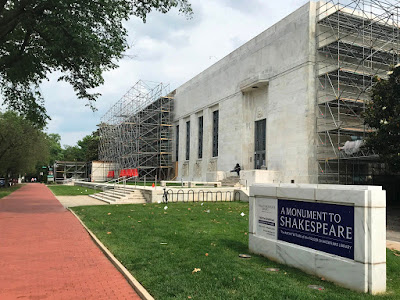 The Folger Shakespeare Library is a wonderful institution in Washington that I did not know about before this trip. It contains the world's largest collection of Shakespeare materials, as well as major collections of other rare Renaissance books, manuscripts, and works of art. Scholars from all over the world come here to study original materials.

The library was built by Henry and Emily Folger in 1930-32 as a gift to the people of the United States. Henry Folger was president and chairman of the board of Standard Oil of New York (later Mobil Oil). He and his wife lived simply, had no children, and spent their spare time and money collecting Shakespeare materials around the world. Emily was a Shakespeare scholar.

The photo above shows scaffolding around much of the building as it undergoes a $69 million renovation. Starting early next year, the library will be closed to the public for two years, although it will remain open to researchers.

The library was built on Capitol Hill next to the Library of Congress. In the year that the library was completed, construction began on the Supreme Court building nearby. The Folger building is unique. On the outside, the modernized classical architecture is harmonious with other government buildings in Washington. Inside, the style is English Renaissance. The photo below shows the Great Hall. 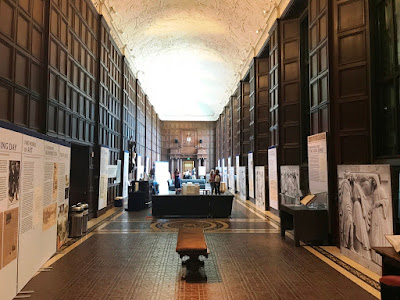 The building includes a 260-seat Elizabethan Theatre, shown below, where we saw a delightful production of Love's Labor's Lost. (And before the show, we had a nice dinner at the nearby Sonoma Restaurant and Wine Bar.) 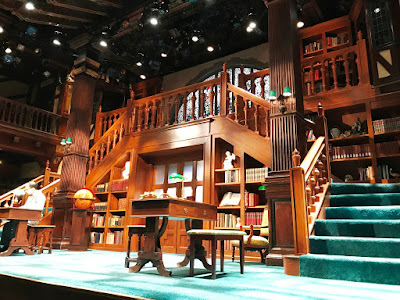 Click here for more information about the Folger building and grounds, including a virtual tour of the Great Hall, Reading Room, and Elizabethan Theatre. The Reading Room was not open to the public at the time of our visit.

There was a close relationship between the Folgers and the Librarian of Congress at the time, Herbert Putnam. His daughter Brenda Putnam was a noted sculptor who created a statue of Puck, from A Midsummer Night's Dream, for the fountain in the west garden. The original 1932 marble statue, damaged by weather and vandalism, was restored and moved inside in 2001. It was used to cast an aluminum replica for the outdoors fountain, shown below. 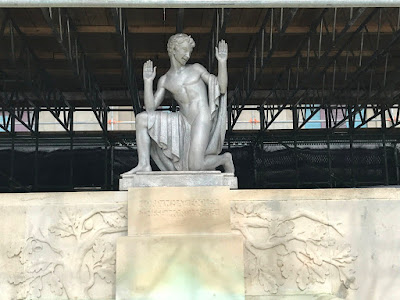 (Click here for a photo via Wikipedia that shows the full garden and fountain, without scaffolding.)

The inscription below the statue says: "Lord, what fooles these mortals be!" (Act III, Scene II, line 115)