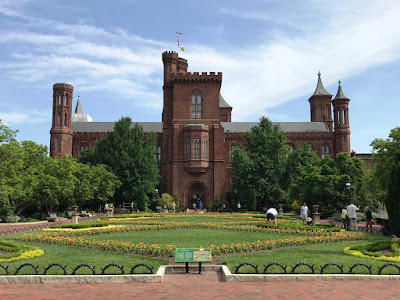 The Smithsonian Institution is one of the treasures of Washington. It is huge, consisting of "19 world-class museums, galleries, gardens, and a zoo," the majority on or near the National Mall. The photo above shows the headquarters, the Smithsonian Castle. In the foreground is the Enid A. Haupt Garden, one of many beautiful Smithsonian Gardens.

British scientist James Smithson bequeathed his estate "to the United States of America, to found at Washington, under the name of the Smithsonian Institution, an Establishment for the increase & diffusion of knowledge." Smithson died in 1829; in 1846 President James Polk signed legislation establishing the Smithsonian Institution. Construction of the Castle began in 1847 and was completed in 1855.

We visited the Castle and four Smithsonian museums plus the National Gallery of Art (not part of the Smithsonian). We saw only a fraction of each museum, and could have spent hours more in each. To keep this post to a reasonable length, I'll mention only one item from each museum.

National Museum of the American Indian 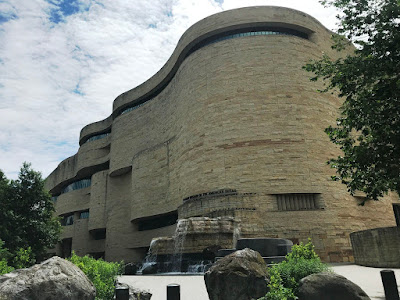 At the time of European contact with the Americas, the greatest empire in the Americas was the Inka Empire. It started around 1200 AD and grew rapidly until by the early 1500s it stretched along the Andes Mountains of western South America from Columbia to southern Chile. The Great Inka Road: Engineering an Empire is a special exhibit at the National Museum of the American Indian that tells the story of this empire and the remarkable road system that connected its far-flung regions to the capital of Cusco (in present day Peru). The Great Inka Road or Qhapaq Ñan included some 20,000 miles of roads.


A vast complex of roads, bridges, and other structures, the Qhapaq Ñan was the largest construction in the Western Hemisphere when Inka power was at its height.


Suspension bridges were made of grass. Watch a 3-minute video, narrated by a professor of civil engineering at the Massachusetts Institute of Technology, about the annual rebuilding of the last surviving suspension bridge of this type: Weaving the Bridge at Q’eswachaka. More info here (scroll down).

The Inka were a mountain people. Although their empire extended along the west coast of South America for nearly 4,000 miles, they apparently never took to the sea. 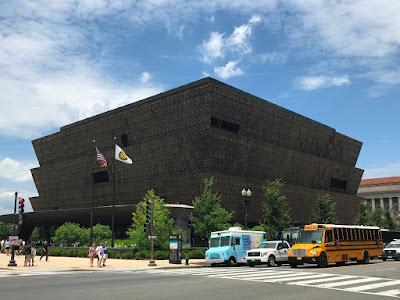 The National Museum of African American History and Culture is the newest Smithsonian museum, established by Congress in 2003. Groundbreaking was in 2012 and the museum opened to the public in 2016. President Barack Obama spoke at both ceremonies.

Below ground are three levels of History Galleries that tell the story of African Americans from the transatlantic slave trade to today: 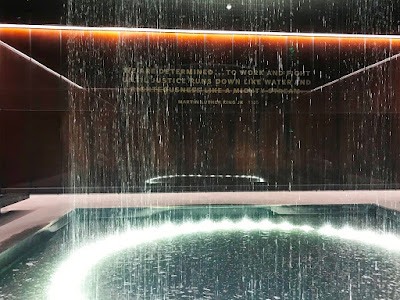 The History Galleries conclude with a Contemplative Court (shown above) and this quote from Martin Luther King, Jr.:


We are determined … to work and fight until justice runs down like water and righteousness like a mighty stream.


The phrase "until justice runs down like water and righteousness like a mighty stream" is adapted from Amos 5:24 in the Bible. 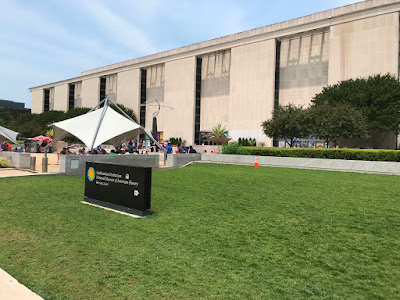 Perhaps the premier exhibit at the National Museum of American History is The Star-Spangled Banner, which showcases the actual (very large) flag that flew over Fort McHenry during the Battle of Baltimore in September 1814 and which inspired our national anthem. I have already written about the Star-Spangled Banner in my earlier post Evening Parade at Marine Barracks, so I will write here about a different exhibit.

The first automobile trip across the United States was completed in 1903 when H. Nelson Jackson drove from California to New York in 63 days, accompanied by mechanic Sewall Crocker and their dog Bud. 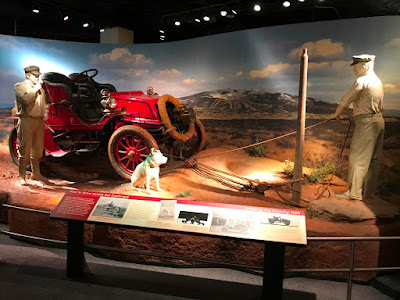 As shown in the diorama above, they spent considerable time pulling the car out of mud holes. The exhibit includes the actual car from this adventure, a Winton touring car. Jackson spent $8,000 to win a $50 bet, but he made headlines all across the country. More info here: Crossing the Country.

H. Nelson Jackson was a doctor and businessman from Burlington, and the car was named "Vermont."

The Freer Gallery of Art and the Arthur M. Sackler Gallery, together called the Freer|Sackler, specialize in Asian art. We toured the special exhibit Empresses of China's Forbidden City, 1644-1912 organized by the Peabody Essex Museum in Salem, Massachusetts, the Freer|Sackler, and the Palace Museum in Beijing, China. This exhibit told the story of the empresses of the last Chinese dynasty, the Qing Dynasty, which ruled China for more than a quarter millennium (1644-1912). 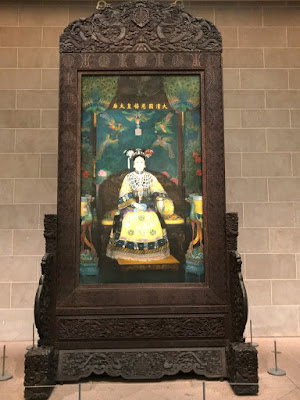 The exhibit included elaborate garments and artworks. Many of the objects have never been shown outside of China, but the painting of Cixi shown above belongs to the United States:


As a way to polish her image outside China, Cixi invited American artist Katharine A. Carl to create this commanding portrait for display at the 1904 World's Fair held in St. Louis, Missouri. In a strategic diplomatic move, Cixi had this portrait presented to President Theodore Roosevelt, who in turn had it transferred to the Smithsonian.


Quotes are from a sign near the painting. This extraordinary exhibition is only at the Smithsonian March 30-June 23, 2019.

The National Gallery of Art includes two buildings: the neoclassical West Building and the modern East Building. The NGA is on the National Mall and looks like it is part of the Smithsonian Institution, but it is not. It was a gift to the United States in 1937 from Andrew W. Mellon, a banker who was Secretary of the Treasury under Presidents Harding, Coolidge, and Hoover.

Below is a photo of the Alexander Calder exhibit in the East Building. 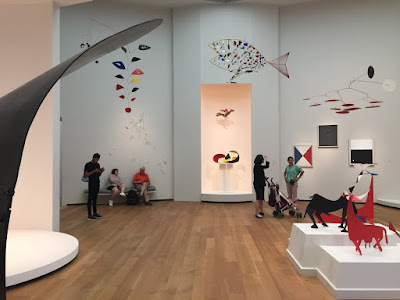