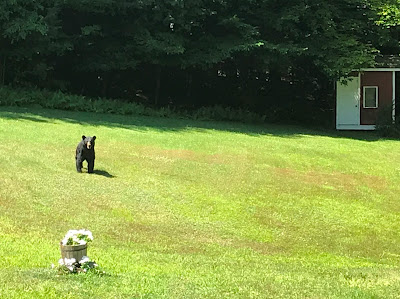 In Vermont this year we are swamped with bears. (Black bears, which are the only kind of bears in this part of the world.)

Earlier this week my wife and I were sitting on our back deck just before noon when we heard noises in the woods. We expected to see deer, or possibly people since there are houses on Vanat Road not far through the woods. Instead we saw two bears come barreling out of the woods, running as fast as they could, charging straight toward us!

One bear was chasing the other. They did not appear to be playing. We jumped up, and I waved my arms and yelled. The first bear never slowed down, but veered slightly to our right, and ran by us. It ran between the house and the car which was parked in the driveway, and disappeared into the woods below the driveway headed toward Greystone Drive. The second bear stopped on our lawn, looked at us for a few seconds, then turned around and walked back into the woods from where it had come.

The photo at the top of this post shows the second bear. The photo below shows where the first bear ran between the house and the car. 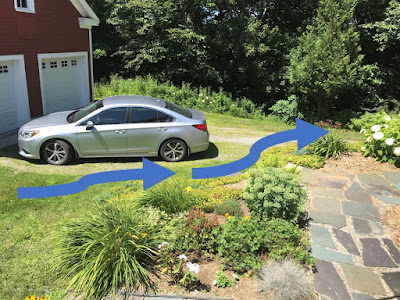 In May the Cambridge selectboard saw a bear at a selectboard meeting! Granted, it was not a regular meeting at the town office. It was a special meeting, a site visit to inspect a road issue. We all saw a very large bear across a field about 300 yards away.

In June a bear visited the garage of our next door neighbor who took the following photo from her house: 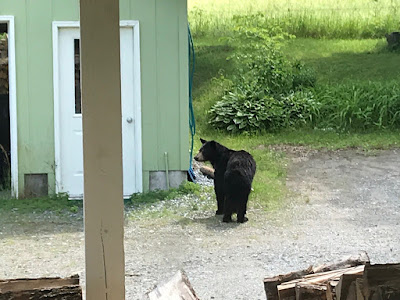 These incidents are just the tip of the iceberg. Nearly everyone you meet in Vermont has a bear story, or several.

There have always been bears in Vermont, but not as many as today. I grew up in this town in the 1950s-1970s on a farm where I spent much time in the fields and woods. I started driving Vermont roads in the 1970s. Beginning in the 1980s I spent considerable time hiking and backpacking in Vermont's beautiful mountains. I did not see a bear in the wild in Vermont until I was middle-aged, perhaps around 2000 or later.

In recent years I have seen several bears, usually from a car while driving. Seeing two bears explode out of the woods in the middle of the day and run toward me while sitting on my own back deck was certainly a new experience!

Vermont's black bears have made a strong comeback. Their numbers are higher today than they have been in 200 years.

Living With Black Bears by the Vermont Fish & Wildlife Department

If you are planning to visit the Green Mountain National Forest in southwestern Vermont, take note of this Food Storage Order issued on July 23, 2019 requiring approved storage of all food and food waste items because of bears.