Hiking in the Adirondacks 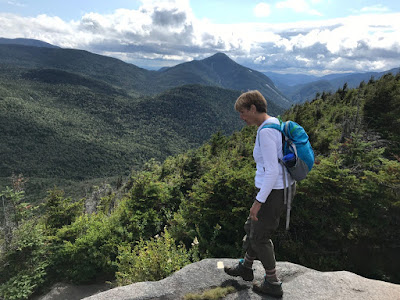 Last century we hiked a fair amount in New York, but this century most of our hikes to date have been in New England. Nancy and I returned to New York this week with two days of day hiking out of Keene. The town of Keene is home to many of the Adirondack High Peaks including Mount Marcy (5344'), the highest mountain in New York.

On Thursday, August 29, we hiked Table Top Mountain (4427') and Phelps Mountain (4161'). Both mountains are a short ways off the Van Hoevenberg Trail which is the most popular route to Mount Marcy. We parked at the High Peaks Information Center adjacent to Adirondak Loj (not far from Lake Placid).

The photo below shows a spider's web that we saw early in our hike. 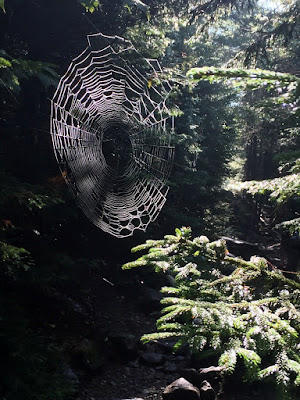 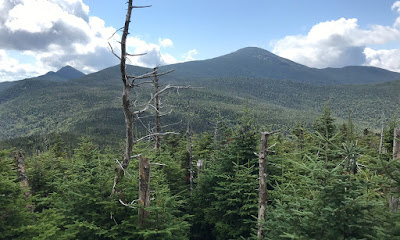 Phelps Mountain is a mile from the Van Hoevenberg Trail via the Phelps Trail. The photo below is from the summit of Phelps and shows Mount Marcy (the highest peak to the right) and Table Top (the rounded mountain in front of and to the left of Marcy) where we had been earlier in the day: 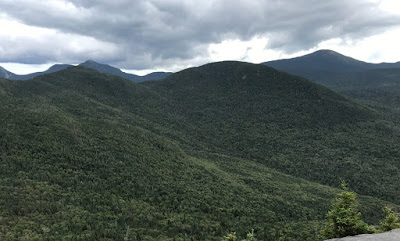 The photo at the top of this post was taken as we left the summit of Phelps. The mountain on the horizon in the center of that photo is Mount Colden.

On Friday, August 30, we hiked Lower Wolf Jaw Mountain (4175') via the W. A. White Trail. This trail begins in the Adirondack Mountain Reserve owned by the private Ausable Club. We parked in the hiker parking lot at the intersection of NY-73 and Ausable Road in St. Huberts, a hamlet in the town of Keene.

It had rained earlier, but the rain stopped by the time we were on the trail. Like the day before, it was a pleasant day, mostly sunny, with temps in the 60s. The photo below is from the summit of Lower Wolf Jaw and shows Mount Marcy to the left and Algonquin Peak, the second highest mountain in New York, in the distance to the right: 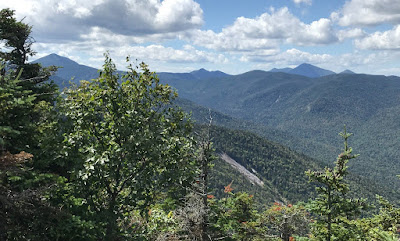 Trailhead parking can be a problem in the Adirondacks. See this article dated 8/26/19 in the Burlington Free Press about overuse in general, and this article dated 7/17/19 in the Adirondack Daily Enterprise about parking in particular. Nevertheless, we did not see overcrowding. We had no trouble parking. While we met numerous people on the Van Hoevenberg Trail, it was not overly busy, and we met few people on any other trail. The summits we visited had from zero to two other people on them while we were there. Hiking on a weekend would undoubtedly be different.

We stayed two nights at Dartbrook Lodge in Keene, and enjoyed two dinners at the Forty Six restaurant next door. We recommend both. The most overcrowding we saw during our trip to New York was at the restaurant. It was deservedly popular, and reservations were needed even on a weeknight unless you wanted to eat very early or very late.

Enjoyed your blog post! I’ve only been in the Adirondacks once, to visit my daughter who was a camp counselor at Brandt Lake. It was a beautiful area. Thanks also for including restaurant recommendations. Much appreciated. I love to hike, but at my age I have two commandments that I’ll never break: No sleeping on the ground. Food must be way above average.