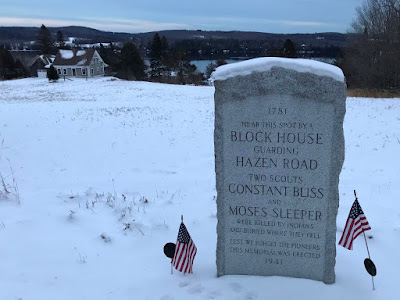 Our Northeast Kingdom Adventures today took us on many back roads with interesting sights. The marker above is on Lake Shore Road on the west side of Caspian Lake in Greensboro:

"Hazen Road," usually called the Bayley-Hazen Road, was a military road constructed during the Revolutionary War in what is now northern Vermont. This 2017 article in the Burlington Free Press has more background about the monument above: Search for the Greensboro blockhouse.

Our travels took us by several interesting agricultural enterprises including Kingdom Creamery in Hardwick, Shat Acres Highland Cattle in Greensboro, Pete's Greens in Craftsbury, and the modern (2015) hay drying operation of Jasper Hill Farm. Jasper Hill Farm makes award-winning cheeses at their farm in Greensboro and at the Center for an Agricultural Economy in Hardwick; the hay drying facility is in Craftsbury. Dry hay is critical to the flavor of their cheeses, three of which are named Bayley Hazen Blue, Moses Sleeper, and Constant Bliss (not currently in production).

Hardwick, where we entered the Northeast Kingdom on today's tour, was once known as the "Building Granite Center of the World." That industry died out about a century ago and the town declined for a time, but:

Over the past few years, Hardwick, Vermont, a typical hardscrabble farming community of 3,000 residents, has jump-started its economy and redefined its self-image through a local, self-sustaining food system unlike anything else in America.

Source: the description at Amazon.com for the 2011 book The Town That Food Saved by Ben Hewitt. Some of the businesses mentioned above are discussed in this book. 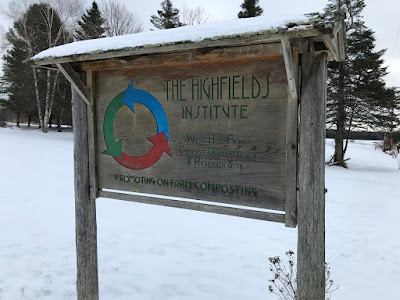 We also drove by something that one does not expect to see in rural Vermont: a $14 million theater in Greensboro modeled on the Globe Theatre in London: 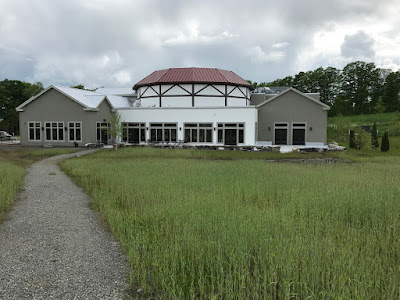 The photo above is from the grand opening of the Highland Center for the Arts in June 2017. News stories about the theater here and here. We have seen several excellent shows in this theater, but like all performance venues it is currently closed due the pandemic lockdown.